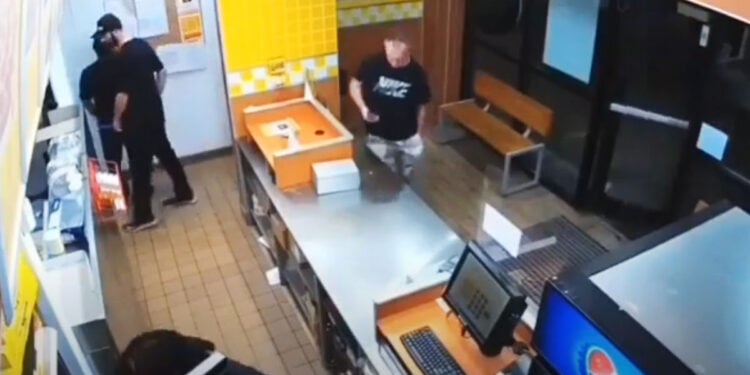 This man wins the Dumb Gun Owner of the Day award. This man was standing in the lobby of a pizza shot, waiting on his order. He is carrying a gun in his pocket without a holster. Then he starts to either fiddle with the gun in his pocket or perhaps something else that was in the same pocket.

The gun goes off right as the restaurant door closes. The workers wondered what the loud noise was, and the man played it off, saying it was the door slamming shut. I tried to dig up more info on this but couldn’t find anything.

This is just a clear example of irresponsible gun handling. The most obvious point here is that you should never be carrying a gun in your pocket without a pocket holster. Period. There are many pocket holsters to choose from. Find one that works for what you need and use it.

Secondly, if you are going to pocket carry, you can’t have anything else in that pocket, even if you do use a holster. The only thing that needs to be in that pocket is the holster and gun. That’s it.

This guy is extremely lucky he didn’t shoot himself in the leg. If you look closely, you can see an exit hole in his shorts after he fired the gun. This could have been way worse. The man in this story I recently covered wasn’t so lucky.