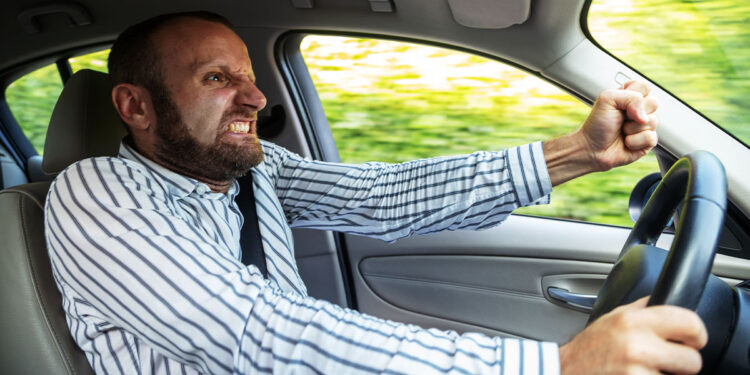 Simply put. Don’t do this.

Police received a phone call this past Thursday morning from a man who said another driver was pointing a gun at him. He was parked outside of a Longmont, CO police station of all places.

When the police responded, they found the man pointing a gun at the other car and immediately dropped it when ordered to by the police.

He was immediately arrested, and this is his story. He was driving on a highway when another car started tailgating them. What does he do? He brake-checks the vehicle, which then goes around and cuts in front of him.

This pushed him into a fit of road rage. He said he was “upset by the other driver’s behavior because it is unsafe and because he was tired of people tailgating.” So he decided he was going to “teach them a lesson.”

He followed the car, which pulled in front of a police station. That didn’t seem to deter him as he got out of the car, yelled at the two passengers of the other vehicle, and pointed a loaded gun at them.

He told the police that he knew what he did wasn’t right, but he wanted to scare them and to know that their driving wasn’t acceptable. But he claimed his finger was never on the trigger. Whether you have your finger on the trigger or not, you’re still in the wrong.

The victim’s story was a bit different. They told the police that the other man slammed on his brakes, causing them to swerve around him at the last second to avoid hitting him. As they passed him, the man rolled his window down and pointed a gun at them. The victims called the police and were instructed to drive to the police department.

If you aren’t responsible enough to control your anger and get worked up to the point where you are pointing your gun at people in traffic, then you should be carrying a gun. Period. He’s lucky the other person wasn’t armed, as I think they definitely would have been justified in shooting to defend themselves.