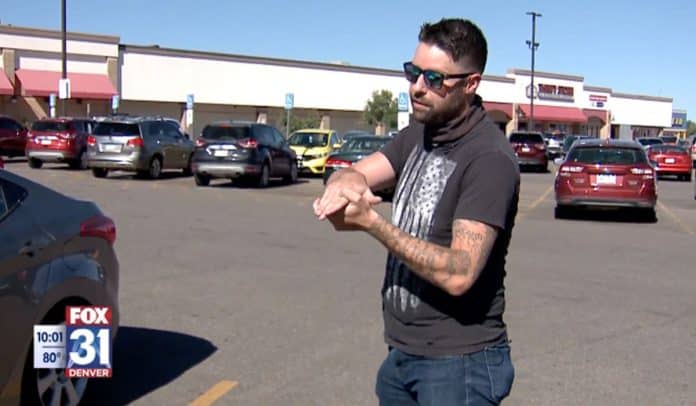 Half-past noon in a supermarket parking lot in Arvada, CO a man is putting his groceries in his car when he is approached by another man demanding the keys to his car. His reply was, “Not happening”. The next thing he knew there was a gun pointed at him.

He didn’t hand over his keys though. Instead, he tossed them several feet to one side. When the would-be carjacker went to get them, the man used that distraction to take a giant step to the side, drew his own gun, and said, “Not happening. Not today.”

“The look on his face was a sheer shock when he looked up and he was looking down the barrel of my pistol,” the victim said. The suspect took off running. “I was yelling at the top of my lungs that ‘This guy tried to rob me with a firearm. Call the police! Call the police!’”, the car owner said further. The suspect reportedly had just crashed a stolen trunk nearby and was looking for another vehicle. He was arrested a short time later and faces multiple felony charges.

Though I always caution against drawing on a drawn gun, this guy did just about everything right. Creating a distraction with his keys gave him time to move off the “X” and get his gun out. Issuing commands probably started the suspect some and then of course looking at the victim’s gun pointed at him was totally unexpected.

Keep in mind though that the suspect’s gun was in his hand and it wouldn’t have taken much for him to point it at the car owner and start shooting. Yes, they could very well have ended up shooting each other. The other option, perhaps safer, would have been to toss the keys and run for cover. But if you are going to go to the gun, this guy did it right.

As it turns out, the suspect’s gun was fake but there was no way to know that at the time. Hollering to call the police was another good move as it draws attention and creates witnesses in his favor.

The only thing this man did wrong was giving an on-camera interview to the media right after the event took place. Granted this looks about as straightforward a case of self-defense as one could imagine and the victim looked rather collected and precise on camera but still, never, ever talk to the media after a self-defense incident. There is absolutely no benefit to you in doing so and it’s very possible that you could create a whole lot of evidence for a prosecutor to use against you.