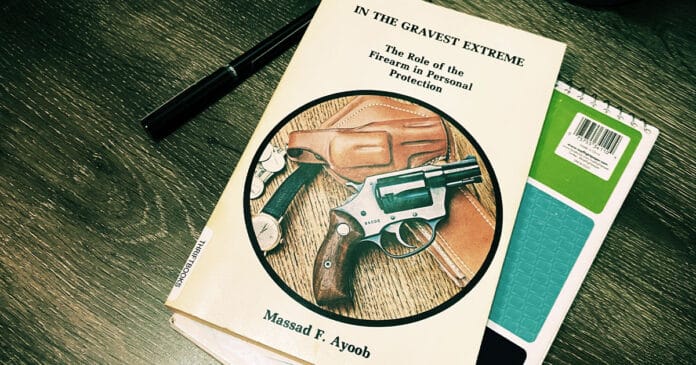 Most everyone in “gun land” knows who Massad Ayoob is. In the Gravest Extreme was first published in 1980. Even though it is over 40 years old, it is still available today, either new or used, for a few dollars less. It runs around $20 a copy, and I have seen it used as low as $13 a copy. Cheap enough that there really isn’t a good reason not to read it.

There are 17 chapters in the almost 130-page book. A wide range of topics are covered in those 17 chapters. Ranging from car guns (what commonly gets called a “truck gun” now), carrying guns outside of the home, using guns for home defense, and using guns to defend a business, to name a few. The book’s breadth is rather large, so the chapters tend to be short, easy reads. The common thread throughout that serves to tie it all together is the legal use of force and all of the potential pitfalls of using force.

The last few chapters get into topics like selecting a handgun for concealed carry, a comprehensive overview of defensive shooting, and the like. This is perhaps where the content has not aged as well as other parts of the book. Firearms, specifically handguns and the ammunition we feed them, have moved pretty far down the road from where 1980 was.

How Has it Aged?

It doesn’t take long to realize the age of the book when reading it. Not because the information isn’t relevant. But the word choices are just starting to show their age a bit. Ayoob’s flair for writing is clear, making the book a rather easy read despite the dated language.

Because the laws have changed over the last 4 decades, some of the specific legal examples will not be useful anymore. Conceptually, for the most part, I think there is enough similarity that the value is not completely lost, though. It would be on the reader to know their local laws and what parts of the book are so outdated to no longer be completely accurate.

Even though dated, there is plenty of application left in the larger message Ayoob is trying to get across with this book. First and foremost, avoidance is preferable. Ayoob does a good job of showing both sides of the scale. The potential costs of a defensive action weighed against being able to avoid the need outright. It serves more to temper the often overly aggressive misunderstandings about the use of force to protect self and others than it does to encourage the use of force at all. If there is another way out, take the other way out. This is an idea that sometimes is lost in the bravado of the modern “gun culture.”

Overall, I think this sums up the purpose of the book well.

“The man who wears a gun carries with it the power of life and death, and therefore the responsibility to deport himself with greater calm and wisdom than his unarmed counterpart…”

It is about being prudent and good decision-making. Do not do the things that would be expected to put you in a bad position.

For something written so long ago, I was surprised to find a significant amount of alignment with what is considered best practice currently. At least partially proving true that “what is old is new again,” I suppose. While I probably wouldn’t call In the Gravest Extreme timeless, I do think there are still plenty of lessons to be learned from it, and it is certainly thought-provoking. It’s worth the read.

I read the book back in the late 80s, found it to be interesting and enlightening. Oddly enough it is still on my bookshelf. Any technical piece will eventually become ‘dated’, terms change, techniques change, some new concepts get added. But I read the book again just a few years ago and do feel that the basic fundamentals have held up well over time.

Gun rights should be kept strong

“Judge sides with former prosecutor in $250K suit” (Herald and News, Feb.10), elicits a revisit to the issue of deadly/lethal force and concealed carry.
I allude to two past Herald and News letters of mine addressing this issue. They include: “Carrying a firearm is a serious matter, so….” (July 21, 2013), and “Common Sense in gun decisions a good thing” (Feb. 11, 2011), respectively.
Both remain archived in the Herald and News. I again strongly endorse the writings of Massad Ayoob, former police captain, gun scribe, writer and national expert on deadly/lethal force, including concealed carry at http://www.ayoob.com. Also, his latest 2014 book: “Deadly Force: Understanding Your Right To Self Defense.” Massad Ayoob is also founder of Lethal Force Institute/Police Bookshelf in Concord, N.H. In “The Gun Digest Book of Concealed Carry” by this author, Mas writes: “Fight for your rights (Second Amendment) and privileges.

There are those in this society who work in a tireless, well-funded concerted effort to deprive you and your children of the right to self-protection. You (the public) have a genuine duty ‘to you and yours’ to fight that. This is a civil rights/human rights issue. The great authority on common law, Lord Blackstone once stated: ‘self-defense is the highest of human rights’. Therefore, work hard to keep it, because powerful forces don’t want you and your descendants to have it.”
Finally, Brian Jenning’s Wednesday, Feb. 8 article: “Ladies of Lead: Profiling the women who choose to carry a gun” (with online video) depicts over 4,200 women alone in Deschutes County (Bend), Oregon who collectively applied for a concealed carry permit in 2016. That indeed is astronomical!