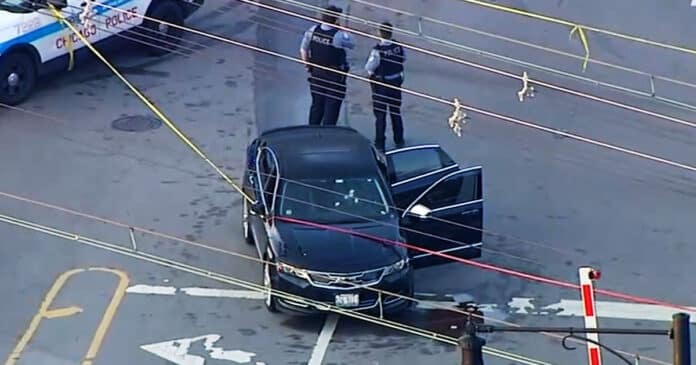 A 23-year-old man was in his car in the South Shore area of Chicago about 2:40 AM when his car was struck by a Ford SUV. The driver of the SUV fled the scene. The hit-and-run victim pursued the SUV until the driver stopped and began shooting at the victim. He returned fire and the SUV driver fled on foot.

Police said that the 23-year-old was grazed by a bullet in the leg but refused to go to the hospital. The SUV driver was not found and it’s unknown if he was struck by any of the 23-year-old’s fire.

There’s rarely much good that happens in the small hours of the morning; especially in a city known for violent criminal acts. Yes, we all have a right to be out and about whenever we choose but unless there is some specific need to be out that late, we all can avoid a good deal of potential trouble by just not being where it’s more likely to happen.

Consider the circumstances. Chicago, middle of the night, SUV driver hits you and keeps driving. Think there is any chance that the SUV driver might have not wanted to risk any involvement with police and that they could be more dangerous than someone that hits you, stops to check that you are ok and then offers to exchange insurance info?

Check the outrage that you might feel after something like this happens and consider if pursuing the hit-and-run driver is worth the risk. An “I’m not going to let you get away with this” mindset could have gotten this young man killed.

The most important rule for an armed self-defender is: Gun on, ego off. This was basically an ego battle with guns. Not good CCW conduct.

Why anyone would pursue a vehicle in hit and run incident in Chicago is beyond comprehension.

People that know me. see this at the bottom of my email, forcefully violate my freedoms and I’m ready for you.
You are only born to die, do it with honor.
A God and Gun Loving American.

No to General and not specific enough; otherwise people would used there own unlawful subjective reason