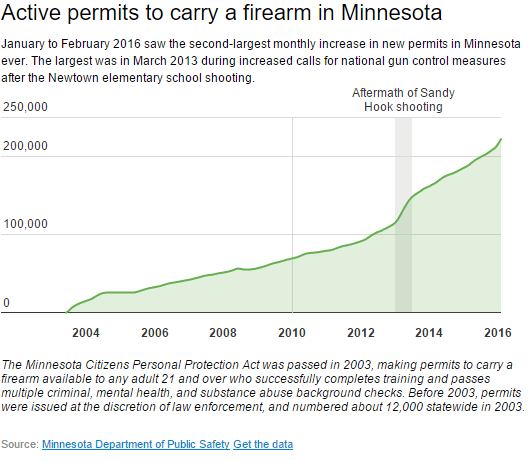 It seems like we are hearing about concealed carry permits on the rise in a state every other day this year with California, Delaware, and North Carolina to name a few.

Go ahead and add Minnesota to that list since data reported from the Bureau of Criminal Apprehension reported that permits in Minnesota have soared in January 2016 with 221,712 active permits which is an increase increase of 6,189 from December 2015. This is the second largest surge since the Sandy Hook shooting in 2012. The largest spike was in March 2013 with 7,213 active permit holders which was a few months after the shooting in Newtown, Conn.

Obama seems to have played a part in this as the increase is timed perfectly with his early January announcement of executive orders aimed at reducing gun violence and new restrictions.

“It’s not always a reaction to mass shootings, although there is some of that,” Andrew Rothman, president of the Gun Owners Civil Rights Alliance said. “But probably the bigger part is the reaction when people hear about the political rhetoric following a horrible murder … that’s what gets people very interested in exercising their rights.”

Active permits have frown by more than 20,000 in the past six months making the ratio 1 in 19 eligible Minnesota adults having a concealed carry permits.

What Sign Would You Rather See At Your Kid’s School?

CCW on the Job: Do Your Research

CCW on the Job: Do Your Research