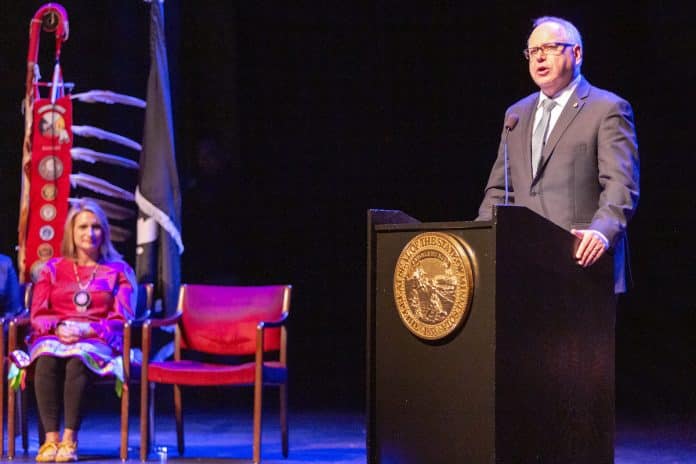 A few days ago, Minnesota Governor Tim Walz issued an executive order that requires much of Minnesota to stay at home until April 10th. Similar to others in the country it shuts down non-essential businesses and requires all persons to stay at home unless engaged in exempted activities.

Shortly after the order went out, I received an e-mail from a local gun store/range stating that ranges and gun stores were considered essential businesses. My first thought was, “Wow, another anti-gun liberal Governor got this one right!”

On reading the executive order though I could find no such exemption. A little further digging revealed why. I found my answer to this incongruent political behavior in Minnesota Statute 624.7192 AUTHORITY TO SEIZE AND CONFISCATE FIREARMS.

The relevant paragraphs are as follows:

(a) This section applies only during the effective period of a state of emergency proclaimed by the governor relating to a public disorder or disaster.

(1) prohibit, regulate, or curtail the otherwise lawful possession, carrying, transportation, transfer, defensive use, or other lawful use of any of these items;

(2) seize, commandeer, or confiscate any of these items in any manner, except as expressly authorized in paragraph (b);

(4) close or limit the operating hours of businesses that lawfully sell or service any of these items, unless such closing or limitation of hours applies equally to all forms of commerce.

The reason gun stores and ranges are exempt from this order is not because Gov. Walz choose to exempt them, it’s because he is prohibited from closing them under this State Statute.

However, the next day, ranges began sending notices that while their stores would remain open, their ranges would be closed. It seems to me that ranges staying open would fall under paragraph (1) above as part of “other lawful use of any of these items” so these actions by the ranges remain a mystery.

Minnesotans can still buy guns and ammo if they can still find any, but it will be difficult for them to find a place to train with them. This is something that is especially critical for all the new gun owners out there who may have to settle for online videos until after April 10th.