The RCS Morrigan: An Ambidextrous Wonder

There are many different holster makers out there these days, the options being nearly infinite to find a holster maker. Raven Concealment Systems has been in the business a long time, and are known for exceptional product quality. We take a critical look at the RCS Morrigan to find out if it is a winner too.

You can hardly do a magazine flip without hitting a kydex holster shop of some type. Obviously, not all shops are created equal. One of the godfathers of the business, Raven Concealment Systems, is known for putting out a pretty decent product. Their flagship Phantom and now Perun holsters and the Eidolon are great options, and probably the more popular RCS holsters. It turns out RCS also has another holster, the Morrigan.

At first glance, the Morrigan is a fairly standard kydex IWB holster intended for strong side carry, but adaptable to other modes of carry. The Morrigan IWB Holster looks pretty generic, but it actually has a nice set of features. The holster is drilled for mounting soft loops on either side of the holster body with four mounting points on the forward half of the holster and two on the rear half for each side. This gives the holster an incredible amount of adjustability for ride height, and cant, which also helps with different modes of carry, like Appendix Inside the Waist Band (AIWB). Perhaps most unusual is that it does not use a traditional method for maintaining or adjusting the tension on the holster. Typically adjustable tension is controlled with a screw and compressible spacer, like a rubber washer. On the RCS Morrigan, they take a different tact. Instead of the typical rubber washer and screw they use a thin strip of Velcro to wrap around the muzzle portion of the holster and tighten the holster body onto the gun. This reduces the profile and footprint of the holster below the trigger guard. It seems to work acceptably when the holster is not being worn, but when the holster is worn the tension of the belt the holster is secured behind likely has more to do with the level of tension placed on the gun inside the holster than anything else. 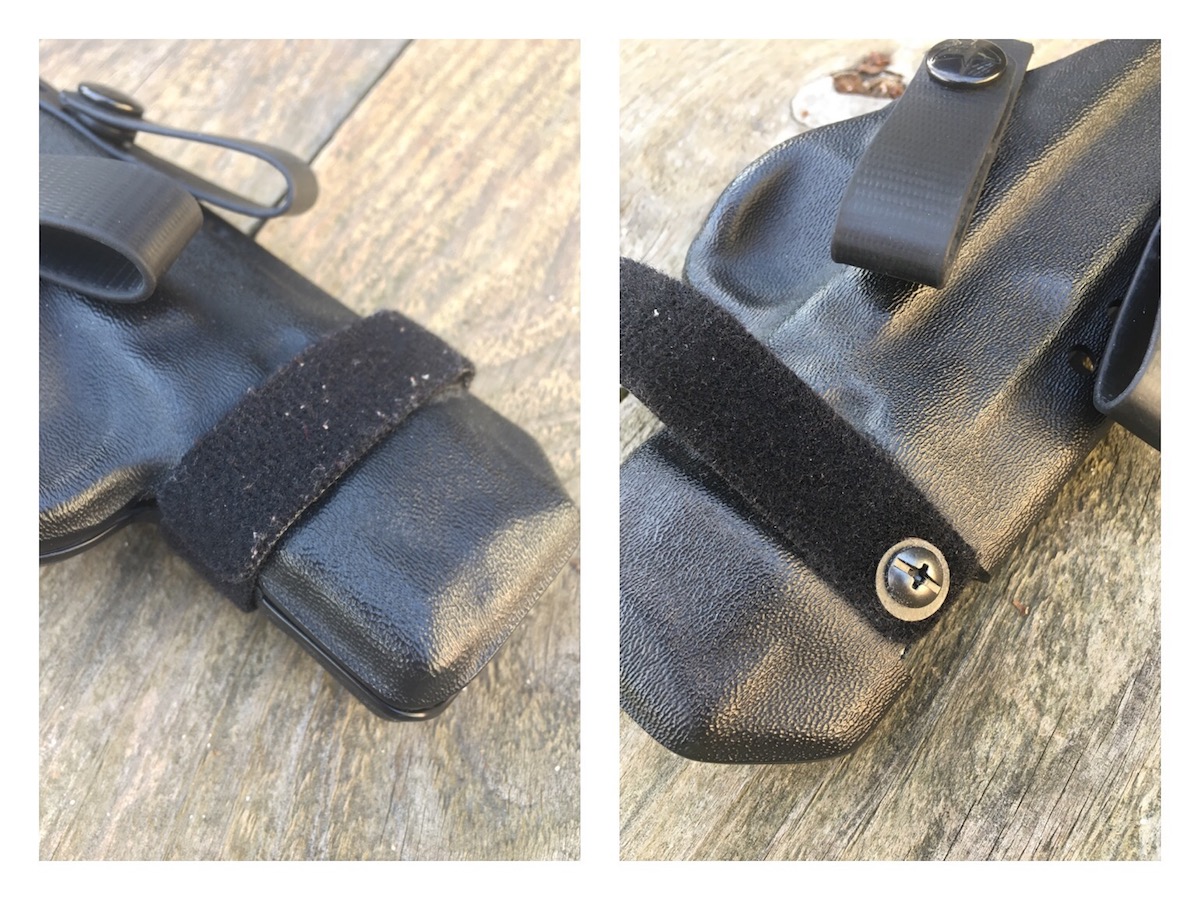 Another common feature on quality IWB holsters is some sort of system to tuck the butt of the gun (i.e., the grip) into the body. For those that have tried to carry larger guns IWB, we all know that the butt of the gun is the part that causes the most issues in terms of concealment. Having a holster with a design feature to tuck the gun into the body can really facilitate carrying a larger handgun than we might normally be able to get away with, or allow for a broader selection of acceptable clothing to conceal the gun with. The general approaches are some type of wing, off the rear edge of the holster, a wedge either foam or molded into the muzzle end of the holster to push the gun into the body, or a raised portion on the holster typically around where the trigger guard is.

The Morrigan uses a bump at the base of the trigger guard that when a belt is cinched down on top of it is supposed to tuck the gun into the body. I think it accomplishes the desired effect of tucking the gun to a degree, but not as good as it could. On the particular sample that I have for the FN 509, the tuck feature does not extend all the way to the front of the trigger guard, which effectively limits the degree of cant that the holster can be worn at while still taking advantage of that feature. I suspect this has to do with RCS still wanting very positive retention on the front of the trigger guard. I can get enough cant out of the holster to be happy with it, but others who like a more forward cant than I do, may not be.

Even though I have my critiques of the holster, I have been happy enough with its performance that some three months later I still have not yet bought a different holster to use as I originally planned to do. The holster is comfortable, adjustable for ride height and cant, minimalist, conceals the gun well enough, all for a very reasonable price of around $50.00. Even though the Morrigan isn’t really the holster Raven Concealment Systems is known for, it really is a true gem of a holster, if not because of the design features, then because of the above par execution and build quality. It will probably be my go to “production” IWB kydex holster that I recommend to people.

Watch Me Get Shot In The Face

6 Times You Need To Let Others Know You're Carrying Concealed