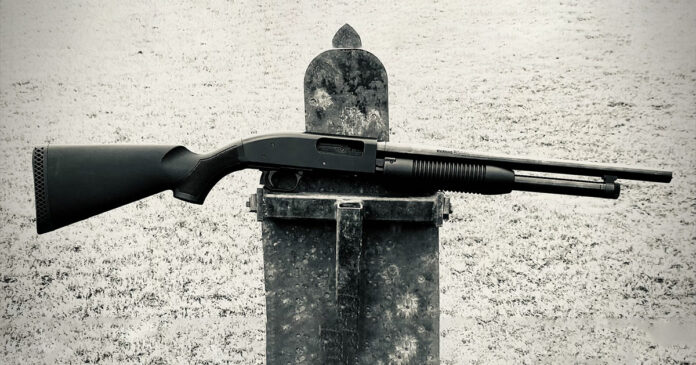 Budget priced shotguns literally fall out of trees it seems like these days. Even with the year that 2020 was, cheap shotguns always seem to be available. Most cheap shotguns though are cheap for a reason. The one that I hear knowledgeable people speak well of is the Mossberg Maverick 88. Being a sucker for a shotgun, and priced right at two Benji’s in this fiasco of a market, I picked one up.

If you aren’t familiar, the Maverick  88 is about a 90% copy of the Mossberg 500. The reason they are able to sell it for the $200.00 price tag is because certain parts are made overseas. Then all the parts are shipped to the U.S. and the gun is assembled in Texas. The part that differs the most from the 500 is the trigger group, and the forearm assembly. The forearm is pinned in place, which just means you can’t change it without changing the whole assembly. If someone really wanted to, a Mossberg 500 assembly will fit on the Maverick 88. There really isn’t good cause for changing it unless someone is wanting to mount a flashlight to it.

The trigger group we are stuck with, which is unfortunate, but we will take it in stride. The traditional Mossberg safety location on the back of the receiver has been moved to a simple cross bolt safety on the front of the trigger guard. Even though that is not an uncommon safety arrangement for shotguns, on the Maverick 88 it is small, difficult to reach, and made of plastic. It could certainly be better. Everything else on the gun screams Mossberg, and is interchangeable with Mossberg parts.

Out of the Box

Out of the box the Mav 88 is about as no frills as it can get for a shotgun. A cheap feeling plastic stock set, a bead sighted 18.5” barrel, a basic blued finish. There is nothing there that doesn’t absolutely have to be there for the gun to function.

The stock fits to the receiver okay, but on my sample, there are protruding sharp edges between the stock and the trigger group housing. I have not noticed them in handling the gun, but if your firing hand interfaces with the gun differently than mine, it could be an issue. There was also a bur that ran the circumference of the magazine tube on the bottom of the receiver. Initially this made it difficult to load shells into the magazine tube because it would catch on the brass base of the shell and hang up. Over time, this seems to have remedied itself as that bur has been worn away with use.

What I noticed most when getting the gun out of the box though wasn’t the cheap plastic furniture, it was how clunky the action was. I am not new to the 500/590 style of shotgun action, and they are always a little clunkier than some other shotguns, but the Mav 88 had some significant catches and hitches when working the action. It had me a bit concerned, but as the gun was used, it did clean up quite a bit. A couple hundred rounds in, and about an equal number of dry fire reps and it is now acceptable, but not perfect. My sample size is just one, but I would not be surprised to find minor issues like these are fairly common on these guns because manufacturing cost is being kept as low as possible.

The Maverick 88 is pretty light as far as 12-gauge shotguns go. The hollow plastic stock, aluminum receiver ala all the other Mossberg pump guns, and thin-walled barrel make for a pretty handy shotty. It comes at a price though. The gun bucks pretty good with full power buckshot and slug loads. It isn’t unmanageable, but will definitely require good technique to keep under control.

The Maverick being the no frills gun that it is, the bead sight is mounted directly to the barrel, and sits rather low. On short guns barrel mounted bead sights tend

to cause the guns to shoot high. My sample of the Maverick is no exception. At 10 yards the gun patterns an inch or two high. When we get to 15 yards, it throws the pattern about 4” high. The pattern is nearly a foot high at 25 yards.

At 50 yards the Maverick is shooting slugs high enough that even aiming at the base of the silhouette, slugs are hitting over the right shoulder of an FBI Q target. One of the unfortunate things about bead sights is that they cannot be zeroed. If I want to get the accuracy to shoot slugs at distance, I just have to remember to Kentucky windage it to get a good hit.

The other good news is that even though the factory stock pretty much sucks and the factory bead sight is wholly inadequate, there is a healthy aftermarket to back the gun up. Since so many parts are interchangeable with Mossberg 500 parts, it is pretty easy to address the shortcomings. A Hogue stock would be a good start, and there are a few options for new bead sights ranging from a basic Bradley bead to a XS epoxy on front sight.

At the end of my testing for this review, I think the best way to sum up the Maverick 88 is “diamond in the rough”. It is a serviceable shotgun the way it shows up, but will need some polishing to really be at its best. For the $200.00 retail price, I think it is an acceptable bargain. Not the best, certainly not the worst, and it is easy enough to get it a little further down the road.

IMHO, every gun owner should own a shotgun.