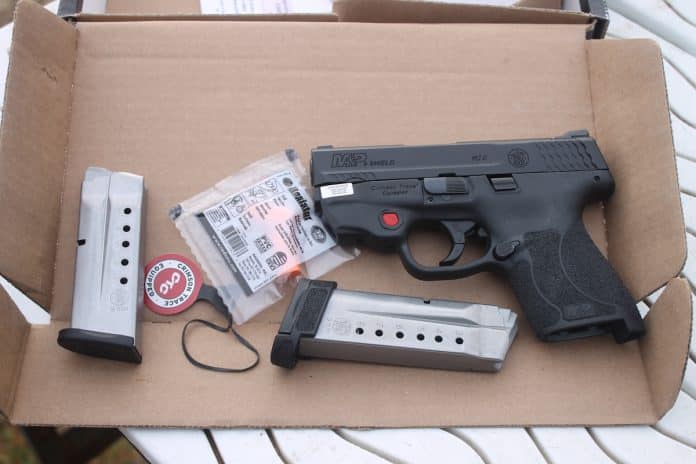 Smith & Wesson’s new round of the M&P Shield 2.0 in 9mm is a joy to shoot, a pleasure to carry and a handgun that makes an excellent CCW.

Of all the handguns I’ve reviewed over the years, this was the hardest to send back to the factory. It just felt right in my hand. It shot well, and it was accurate.

Sycamore, GA, Police Chief Bill Ryder joined me on the range for shooting.

The mag springs are to the S&W standard, heavy. So heavy that Bill and I had to work to get that last round in the mag. This is not a problem. Stiff springs mean more reliable feeding over the years.

The slide has the expected cuts on the back end for easy gripping to pull it back. The foreword end also has “scalloped” grooves in case you want to grab the front.

The Crimson Trace integral laser can be adjusted for elevation and windage. Two Allen wrenches are included for this purpose. S&W now has the Shield with a green or a red laser. The laser has two settings, constant and blinking.

“The red integrated laser utilizes a pair of 357 batteries, and the green used a 1/3n battery. They can be replaced by removing the slide and accessing the top of the laser cavity. A small screw retains the cover,” says Jason Clark, a product manager at Crimson Trace. “The blink setting is to aid in visibility. Some users are able to see the flashing light easier that a constantly active laser. It’s a personal preference and condition dependent.”

The shooting was done from 25 yards and three yards. We shot 115 grain hardball.

I am not a marksman, but the groups were tighter than I typically shoot. Since it was the first time I shot this handgun, I was extremely pleased. This is also another reason I hated to send it back. With time and practice, the M&P Shield would be the handgun I fire more accurately than any other I own, except for the really long barrel hunting handguns. Bill was equally impressed with the accuracy.

It is a polymer lower.

The grip has a very rough finish akin to heavy grit sandpaper. S&W calls it an “aggressive grip texture.” The texture lets you grip, even with wet hands, without worrying about slippage.

It has the quick takedown features of the M&P line.

The barrel is 3.1 inches, and the overall length is 6.1 inches. It tips the scales at 18.3 ounces. The length is identical to my CCW revolver. The 9mm is heavier, but also slimmer. Dropping it in my pocket, without a holster, it profiled far less than the revolver I carry. 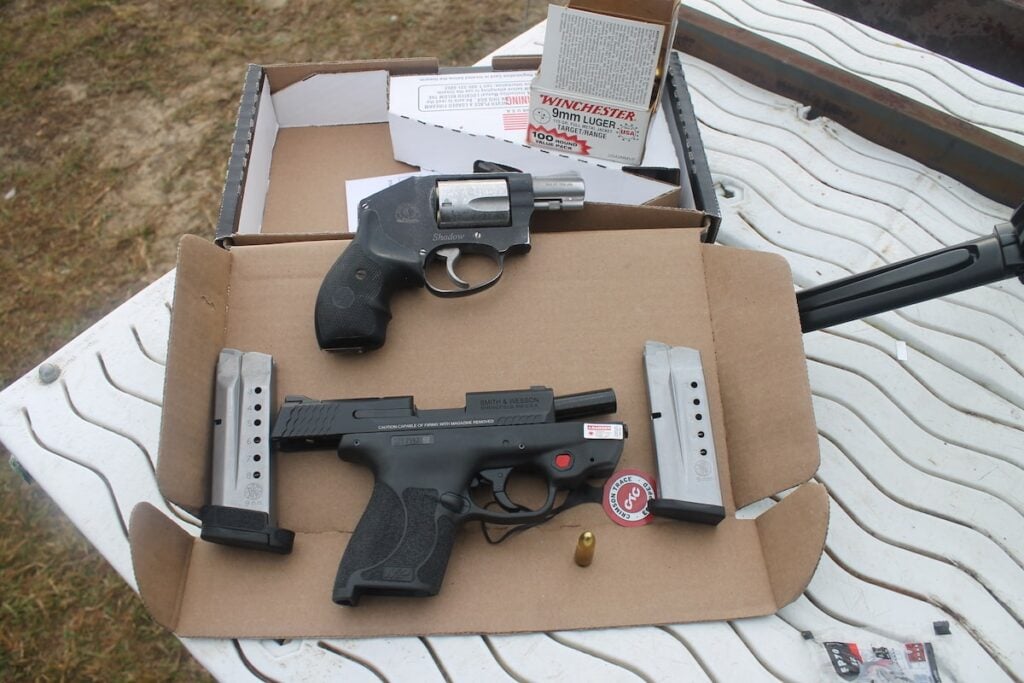 The laser button is on both sides, making this one suited for right and lift handers. The switch is flush to the frame.

The barrel and slide have a small cutout allowing you to see in an instant if you have one in the pipe. Every gun should always be treated as if it was loaded. Visual inspection points like this add another level of safety.

The sights are white dot and adjustable on the rear.