Revolvers are easy to learn but hard to master. It is very easy to get into bad training habits that are doing you more harm than good. This article discusses three of these training traps and how to get out of them. 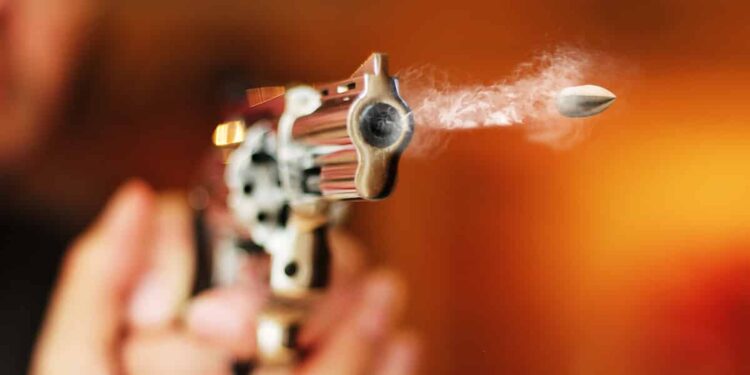 As a revolver fan myself, and someone who often carries a hammerless snub nose, I see far too many people carrying revolvers for the wrong reasons and training with them in the wrong ways. It is very possible to put in a lot of practice but only get a little progress. Practice does not make perfect if you’re just practicing your problems themselves. Below are three common training traps that I see many revolver shooters get caught in – patterns of practice that give a false sense of improvement which can be detrimental or even dangerous.

Any double-action revolver with an exposed hammer can be fired in single-action mode. This versatility can be one of the selling points of a revolver, and the ability to use the same gun with two different trigger modes can be helpful in training, allowing the shooter to see how it affects their accuracy.

The problem is that many people who carry double-action revolvers do a lot, if not most, of their shooting in single-action mode. Worse than that, many people will buy a revolver for their spouse, parent, or someone else who is very new to guns, and look at single-action as the “easy” way to use it for an inexperienced shooter, or someone with weak hand strength, sending them down the wrong training path.

This is one of the worst training traps you can fall into. It is much easier to shoot a revolver accurately in single-action mode. However, in a defensive shooting, you will not have the luxury of cocking the hammer and taking careful aim, and if you manage to do so, it will make your follow-up shots way too slow. If you intend to use a revolver for self-defense, being able to use it in double-action mode is absolutely critical. Double-action revolver shooting is an entirely different skill than single-action shooting. Not only is the trigger pull 2-3 times heavier, but you have to pull it much further as well.

This is one reason I’m a fan of hammerless revolvers for concealed carry – not only do you get the benefit of a snag-free draw, but it also forces you to be honest with yourself about how well you can shoot the gun. If you can’t shoot well with the double-action trigger, you should not be carrying a revolver.

Not Using your Carry Ammo

One of the many great things about revolvers is that they can handle a wide variety of different loads without a difference in function. The range of power of different loads can be much wider than for any semi-automatic. A .357 Magnum revolver can handle anything from super light .38 wadcutters to extremely potent magnum loads, and the gun functions just the same. This allows the shooter to select the load that they are best with and that best suits their purposes.

The problem is, though, most people want to shoot the cheapest ammo for practice and the best ammo for self-defense. This is fine, but it can mean that your carry ammo will have wildly different performance than what you’re practicing with. The recoil difference between a .357 Magnum defensive load and a .38 Special target load is huge, especially in smaller and lighter guns. Even with .38 Special, the recoil of most +P defense loads is much harsher than regular, cheap target rounds, mainly because so many .38 revolvers are very small and light.

Even so, many people will shoot only the light target loads at the range, then load up the powerful stuff for concealed carry. Maybe they will shoot “the good stuff” a few times when they first buy it and then never touch it again. This is a bad habit to be in. In a defensive shooting, you default to doing what you’ve practiced (that’s the point). But if your recoil is suddenly much higher than what you’ve trained for, all your muscle memory and rapid-fire recoil handling practice won’t help you much, because everything will be different.

This is especially troubling to me with people who carry ultra-light .357s. Most people who shoot these guns come to the same conclusion – it is a pretty awful or painful experience. Yet, many people carry them anyway and fill them with those hot .357 loads that they hate actually practicing with. If you can’t shoot them well in practice under controlled conditions, why is carrying them for self-defense a good idea? You will only shoot them even worse.

None of this should be taken to mean that you should not practice with cheap ammo. Shooting cheap ammo allows you to practice more. While the recoil difference does matter, it isn’t everything. Otherwise, dry fire practice wouldn’t be as useful as it is. My point is that you should shoot your carry ammo (or ammo of the same basic performance) regularly. Shoot at least a cylinder full every range trip, or make it a point to practice with only your defensive load every so often. Make sure you keep your awareness of the difference in recoil up to date. It is a little more expensive to shoot “the good stuff,” but it is a worthwhile investment in your skills.

And if you can’t enjoy shooting your overly-powerful super magnum load enough to get in good practice, don’t carry it!

Loading your defense gun with the ammo you’re going to shoot the worst with is a terrible idea. As I stated at the beginning of this section, there are a wide variety of different power levels of revolver ammo. There is no shame in using a reduced-recoil .357 load if it is capable of adequate penetration and expansion. I personally carry the Speer Gold Dot 135 grain Short Barrel load in my .357 (2.5″ barrel Smith and Wesson Model 66), because it has much milder recoil than most loads while still performing great. Sure, it isn’t the “most powerful” by any means, but that just means I can get shots on target that much faster, and I don’t hate shooting the stuff at the range!

Adjusting your Sights Instead of your Skills

I love adjustable sights, especially on revolvers. Many revolvers come standard with them as well. Because of the wide variety of different loads that are available, as discussed previously, you can have pretty significant differences in the point-of-impact across this spectrum of loads. Adjustable sights allow you to get the best accuracy regardless of what load you’ve chosen.

However, you need to be really careful when adjusting your sights. You have to make sure that you are not the reason why your bullets are hitting a different place from where you’ve aimed. If you’re shooting low because of recoil anticipation or left because of poor trigger finger placement, the last thing you want to do is adjust the sights. This will just make you think you’re shooting well when all you’re doing is getting really good at shooting wrong. Tight groups are the result of consistency, but it is possible to be consistently wrong. You don’t want to practice a bunch only to make your flinching very consistent. That’s the opposite of what you’re trying to accomplish!

So unless you’re a very experienced shooter with good fundamentals, you should avoid adjusting your sights constantly (and a good shooter won’t have to adjust them often). Anyone adjusting their sights all the time (I used to do it a lot more when I was first learning to shoot) is just trying to put a band-aid over the problem, and will inevitably just have to adjust them later as they are not actually getting better.

Of course, even if you’re a newer shooter, you still want your sights to be correctly adjusted. But before you go down a long road of trial and error, have some other people shoot your gun and see if their shots are doing the same thing as yours, especially if the other shooters are much more experienced. This is also a good use of the benchrest shooting position – you should always try to minimize any sort of interference when you’re sighting something in.

I’ve had several students who thought their sights were a little off until they handed the gun to me to try, and I have also had guns where the sights were actually a little off. If everyone is having the same problem, go ahead and adjust. If you’re concerned about your sights, and you aren’t confident enough in your own shooting to know if they need adjustment, you should seek some additional training. A good instructor will make you a better shooter and should be a good enough shooter himself to adjust your sights for you.

If you carry a revolver and you’re doing some of these things, don’t beat yourself up about it. I’ve done this kind of stuff myself, especially when I was first starting out. Just know that you need to train with your revolver in the way you will be using it defensively. Not all practice is created equal, and you have to be honest with yourself about your skills and your goals. Build a plan for yourself and stick to it, and don’t get discouraged. Don’t rationalize lousy practice habits. Being bad at good shooting skills is preferable to being good at bad shooting skills, because at least then your practice is accomplishing something!

9 to 5 Self-Defense: How to Stay Safe in the Office