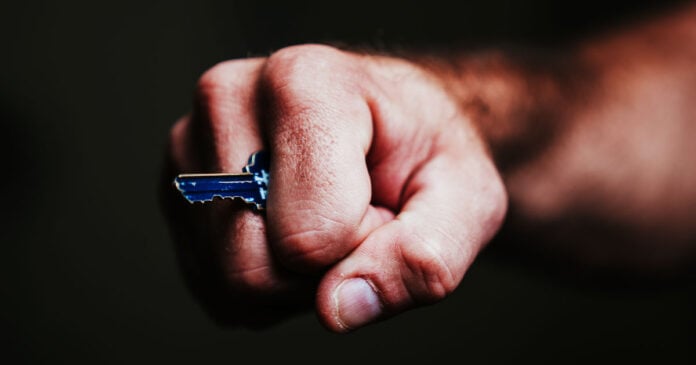 From our humble beginnings as a species until the present, self-defense and personal protection have been some of our biggest concerns as a species. As a result, a lot has been said and written to meet that need in virtually every culture on the planet. This is a rich trove of information and knowledge from which we can draw important and valuable lessons. However, it also contains a fair amount of nonsense. It’s important not to be misled, so we’re going to take a look at some of the more prominent self-defense myths and explore the actual truth. This list is nowhere near comprehensive, so be critical of any new ideas that come your way.

I wish that this were true—and in individual cases, it might be. Certainly, a solid response to any attack is a direct counter, using whatever tools you may have available. However, you should never plan on the sight of a weapon or your willingness to fight back to be enough to send the bad guy running. You need to be willing and able to fight if you must.

In reality, a physical altercation is your least desirable alternative. De-escalation, beating a hasty retreat, or another avoidance tactic is preferable. There are times when you may not have that option, but it’s likely the one you should employ first if it does exist.

This is related to #2. Legally in many places, hitting first isn’t self-defense—it’s assault. Stay on the right side of the law.

Self-Defense Myth #4: The old “keys between the fingers” trick.

This is a trick much beloved by women’s self-defense courses everywhere, but frankly, I’ve never had much luck with it in testing, and I don’t know anyone who has. If you insist on trying it, make sure you practice with real-life speed and force and settle on a grip that works for you. I’d argue that there are more effective improvised weapons out there, so do some research and get familiar with them.

One of the most amazing things about this is our basic human willingness to believe disinformation if it comes from a casual source. Your friend is most likely not a lawyer, and even if they are, they’re likely not your lawyer. Save your questions about the law for a professional—they’re the ones working on your behalf and bound by the standards of their profession to give you the best advice they can.

This is too big a topic to tackle here—I’ll write an entire article or two later—but traditional martial arts can work very well for self-defense with the proper training and mindset. However, you ought to keep reading.

Self-Defense Myth #6b: Martial arts are the be-all and end-all of self-defense.

Closely related to #6a and equally untrue. No one system of hand-to-hand combat is demonstrably superior in a self-defense setting. Too much depends on the individuals in question, the circumstances at hand, and a host of other intangibles. However, mindset and knowledge are universal, so put your focus there.

As I said at the beginning of this journey, we’ve only scratched the surface. I’ll be addressing more myths as they come up, so stay tuned.

“No one system of hand-to-hand combat is demonstrably superior in a self-defense setting. Too much depends on the individuals in question, the circumstances at hand, and a host of other intangibles.”

Amen! Unfortunately this obvious truth is unlikely to stop the pervasive bad-mouthing of various styles by fools who think their martial art or combat sport is the be-all for every situation. This has become endemic in modern martial arts, especially with the rise of BJJ.

Martial arts goes through “fan phases”. In the ’40’s it was Japanese jujitsu (thanks to WWII movies.) In the ’50’s, judo. In the 60’s, karate. In the 70’s. kung fu (thanks to Hong Kong movies). In the 80’s, it was ninjutsu (thanks to Sho Kosugi and Stephen Hayes.) In the ’90’s, UFC started the current MMA craze, and when the BJJ artists started winning that, BJJ became the current fad, closely followed by Muay Thai.