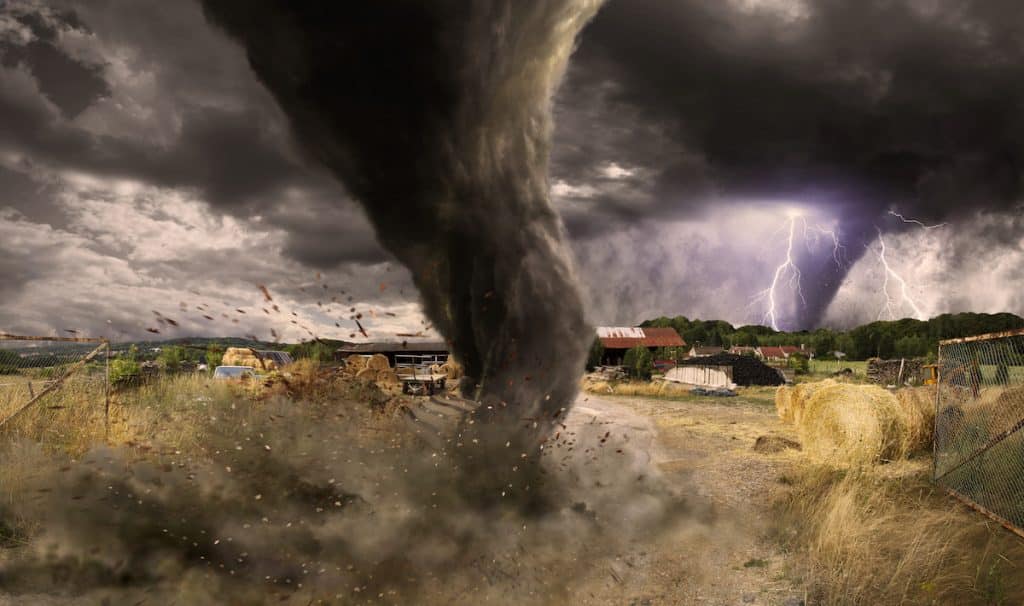 Earthquakes in Idaho, wildfires through the Pacific Northwest, Hurricane Harvey, and now Hurricane Irma… If you’re not on the edge of your seat already, you might want to check your pulse.

Social media is full of pictures of people scrapping over bottles of water, getting greedy or just plain getting criminal. Natural disasters and emergencies can bring out the very worst in folk. That’s why, as law abiding gun owners and concealed carriers, it’s our job to prevail no matter the conditions.

#5: The Best Way To Be Calm Is To Be Prepared

If you waited until the weather forecaster said the storm is overhead, you’re going to be stressed out. You don’t have enough water, food, or supplies to take care of yourself and your family and you know that’s not going to work out.

This is going to force you to deal with countless others as they pack into the local Walmarts, Home Depots, and supermarkets looking for supplies. These are the situations that are ripe for conflict. Everyone is stressed out and everyone has priorities.

The best thing you can ever do for yourself is to prepared for these disasters before they happen. Buy emergency supplies — food, water, duct tape, boards, tarps, etc. — before a natural disaster occurs. It doesn’t matter if those supplies sit for a long time. It’s better to have then have not. It’s better to avoid conflict than be forced into situations where a conflict can occur.

There’s one jug of water left on the shelf. The woman in front of you nabs it and throws it on a stack of water jugs and food into a shopping cart and is happily trotting off to the cash register. Did she need 100 water jugs?

Now add in other customers that were looking at that exact same water jug. You have a family. You have a home. You need that water. And wanton acts of greed just exacerbate the frustration you’re likely feeling as you watch something you positively need to survive is walking away.

That’s when it’s time to walk away, too.

There’s nothing good that’s going to come from you arguing with another person in a supermarket over a loaf of bread or a cart full of groceries. Until we reach sub-Saharan levels of desperation (and the rule of law no longer has any weight), the rule of law holds the aggressor accountable. To reach out and grab something from someone’s cart is to invite a conflict.

Push out further. Try another place. It’s not worth getting caught up with police and other civilians.

#3: Don’t Leave Your Guns In The Car During A Natural Disaster

If you carry a gun in your car, get it out. Even if the roads aren’t flooded or there’s no fires, there is a real risk of people looting abandoned vehicles. During a natural disaster, that gun needs to stay on you. That back-up magazine sitting in the glove box needs to be on you. It’s no good if it’s located somewhere you can’t reach or within the reach of some criminal.

#2: If You Have To Evacuate, Store Safely

During a natural disaster isn’t the time you want to pick up a fire-proof safe. Any firearms you intend to keep at your residence you should have a plan to store in a way that they cannot be harmed by fire or water. Those are the big ones. Guns can hold up decently to water for short periods of time but fire can absolutely ruin them.

In the event of an evacuation, it may not be practical to take all of your guns. Focus on what you can reasonably carry on your person. This should include your daily concealed carry pistol. Take whatever spare magazines you have for that pistol.

Concealment is the wisest move for firearms during an evacuation. When everyone is on edge, you want to be as invisible as possible. If you see a civilian carrying an AR-15, loaded down with magazines and rigged to the teeth, you’ll notice him. Don’t be noticed.

If you evacuate your home, know it’s possible that thieves and intruders could potentially break in. If they do, you do not want them to have access to your firearms.

#1: Fight As A Last Defense

If you are heading out of the way of a natural disaster — or picking up the pieces during one — the last thing you want is to be separated from your family when police arrive. If you have to fight to defend yourself, that may happen. During a State of Emergency, gubernatorial powers take precedent. It’s a confusing time and it’s easy to get caught up in a whirlwind of dire circumstances and emotions.

This isn’t the time to get separated from your family because law enforcement needs to process you.

It’s your job to stick it through to the end. Carrying concealed and keeping low can help increase your chances of avoiding conflict. If you have to fight, fight to live.

To hell with last minute water bottles and supplies from the stores. Keep your own prepper supplies at home and always ready to go. I keep at least 25 gallons of water at the ready, along with water filtering systems, home canned and freeze dried food, medical supplies, sources of light and heat, assorted camping gear, etc, etc. This way I’m not at the mercy of the markets and don’t have to worry about competing with other people. I can hunker down where I am, or be on the move away from population. My reccomendation is to have at least a one month supply for yourself and family, to a three month supply. Myself? I’ve built a two year supply for us. If I have to bug out I have everything ready to thrown in the truck and trailer within 1/2 an hour. The rule is: GET A KIT. MAKE A PLAN. GET INFORMED. BE PREPARED.