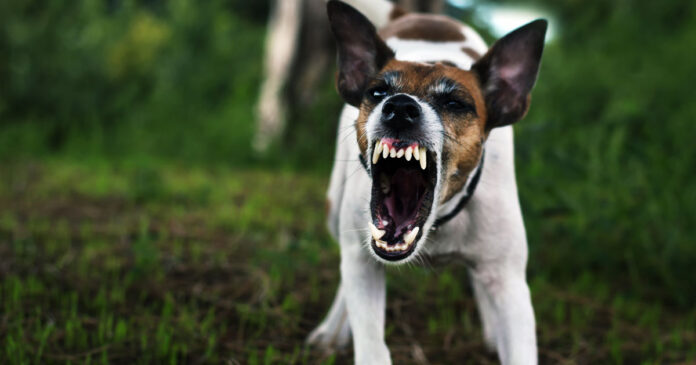 In Springfield, OR, police were alerted to a disturbance around 7 A.M. in the backyard of an apartment at Jenna Village where a dog had viciously attacked its owners.

Upon arrival at the scene, officers and fire personnel discovered a neighbor had shot the dog with a small-caliber gun who came to the couple’s aid.

The owners had suffered serious injuries, and their dog fled back into the house after being shot by the neighbor, where he locked him in.

“Due to the extent of the owner’s injuries, they consented to having the dog euthanized,” Springfield police said in a statement.

Animal Control removed the dog from the home and brought him to the emergency veterinary hospital, where he was euthanized. Police are continuing to investigate but say a threat to the community no longer remains.

From the firearm side of things, this aligns with being wary of your surroundings. Living in an apartment complex, this situation is more easily noticeable with how close everyone is.

Either way, as firearm owners, our self-awareness has to be on the most heightened level as possible. Fortunately, this couple was saved by a prepared gun owner and did not suffer any more extensive injuries than they already had.

On the animal side of things, what do pet owners have to say about this? The neighbor saw first-hand the couple suffering at the hands of their own pet and locked him away when the opportunity was open. Is the couple justified in having the dog euthanized? Ultimately these decisions are left in the palms of the owners.

Being an owner of multiple firearms and multiple dogs, including a rescued pitbull who was abused for years and has anger issues (even with me)… there is NEVER any acceptable time to shoot a dog. There are numerous ways to disable all but the most massive of dogs. NUMEROUS. It all boils down to fear. There is ALSO a reason why the dog behaved the way that it did. There are zero bad dogs, only ignorant, irresponsible, or uncaring owners. People who shoot dogs are cowards, sorry. I guarantee you if you jump onto a dog – pitbulls, rottweilers and dobermans included – and put it in a simple headlock, you’ve instantly neutralized the dog. Putting a dog in a headlock is incredibly easy and requires little “training”. Yes, there is a chance you may get bit (oh well, it’s only a dog bite, not a shark or alligator bite). Speaking of bites, you are in more danger of injury from infection from a CAT bite, and they are far more likely to bite than any dog. All bad dogs – even the WORST ones – can be rehabilitated and trained. The only things on this planet that deserve a bullet are criminals and food. That’s what I know to be true.