A Non-diagnostic Approach to Pistol Malfunctions 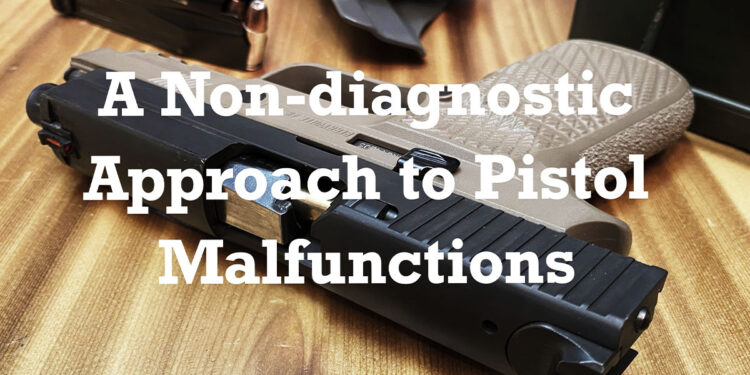 Using a firearm to defend ourselves or others is a mentally taxing task. There are several variables to try and keep up with and the decision-making processes that need to run are quite complex. People only have so much cognitive capacity to work with. Programming techniques that do not add much to the cognitive load can help us make better decisions under intense stress.

Malfunctions seem to be that one thing that I see throw a monkey wrench into a person’s game when they are shooting. This is in part because malfunction clearance is not something we tend to practice all that much. Let’s be honest, we are on the range to shoot, not clear malfunctions. Malfunctions do happen though, and sometimes at the most inopportune times when we really need the gun to be working for us, not against us.

By using a “non-diagnostic” approach to clearing malfunctions we can simplify the decision making, and just let the program run. The process is always the same, and once it is realized that there is a malfunction, addressing that problem requires very little additional thought. This is opposed to an approach that relies on identifying the type of malfunction and then selecting an appropriate course of action to correct the malfunction. We can remove decision points by using a “non-diagnostic” approach, theoretically making it less taxing.

This is how it is supposed to work.

An in-battery malfunction is when the slide is fully forward, but the trigger just clicks or is dead. This could be caused by a bad primer, an empty chamber due to some type of feeding issue, or maybe even a broken part. It doesn’t really matter though, because the start of the process is the same.

This is actually a point of contention with many big-name instructors. I know of more than a couple that no longer teach to hit the base of the magazine. It is up to you whether or not you want to include that step or not. Be your own person, and know why you are doing it, or not doing it. For now, I am going to stick with the classic approach just to give the full picture.

After we hit the base of the magazine, we run the slide all the way to the rear and let it go to return to battery. It is important that the slide be run with some force. This is the way the gun is meant to function, and we want to give it all the help we can. We really need this thing to work, remember. Hopefully, this will fix our problem, if it is a simple one.

If the problem isn’t so simple, we will probably end up here, with an out-of-battery malfunction. Out-of-battery malfunctions are when the slide does not go fully forward. This is typically caused by some type of failure to eject or a double feed. In some cases, it can be caused by failure to feed where the round feeding out of the magazine is jammed on the feed ramp (looking at you early Gen 4 Glocks in .40 S&W).

Back to Step One

The beginning of clearing this type of malfunction is the same as before. Hit the base of the magazine, rack the slide. The reason it starts the same way is because it means we have less to think about. We don’t actually have to identify whether it is an in battery or out of battery malfunction. We just hit the base of the magazine and rack the slide. All we care about is if it doesn’t work we move to the next step.

If the initial clearance didn’t work, this is where we go next. The magazine should be ripped from the gun by depressing and holding the magazine release button, then grabbing the base of the magazine and forcefully pulling it out of the gun. If it is the only magazine we have, we probably want to hang onto it. I usually do not carry a spare magazine, and I know several other people who are the same. Traditionally though, that magazine would be discarded because most double feed type of malfunctions are attributed to the magazine. If it is all we have, we just have to make it work anyway.

Once the magazine is out of the gun, the slide is forcefully pulled to the rear and released several times to ensure the chamber is clear. Tilting the gun up, and rotating slightly toward the ejection port side will help clear things out. In theory, we should be able to watch the gun and see when all the stuff comes flying or falling out of it. It never seems to turn out that way for me though. I just work the slide a few times and call it good.

A magazine is inserted back into the gun and the slide is pulled back and released to chamber a round. There we go, problem fixed. Hopefully.

In its most basic form, the steps are rip, work, and then reload the gun. Depending on the gun, it may be necessary to first lock the slide open before ripping the magazine out. It depends on a couple of factors. It would be prudent to know your equipment ahead of time and see if you can rip the magazine on an out of battery malfunction with your specific gun and the magazines that you intend to carry in it.

If you are not familiar with malfunction clearance, I hope this helps. If you already have a process for clearing malfunctions, be thinking about how well you have it programmed, and whether or not you can complete the task while thinking about something else. Happy shooting.