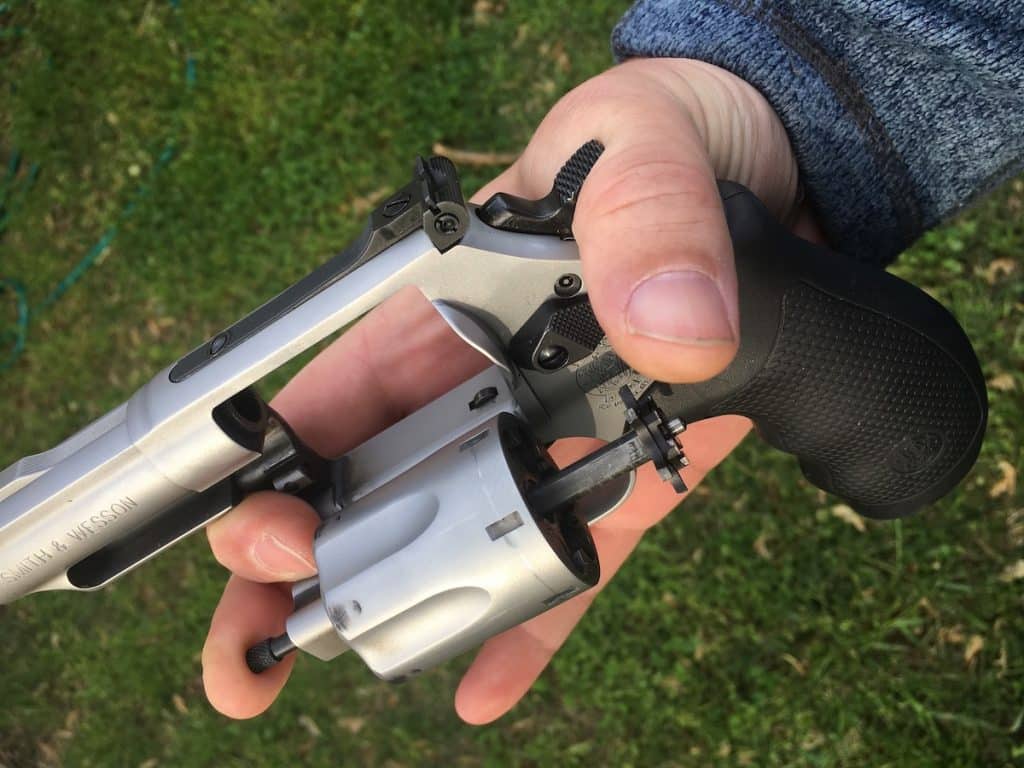 If anyone has spent much time working force on force, or reviewed gunfight debriefs, they will soon realize that hands and arms tend to take damage in gunfights. Luke McCoy, the owner of USA Carry, went through some force on force training this week while filming an episode of First Person Defender. In the first scenario, his weak side hand was shot while engaging with an “intruder”. So he knows about this first hand, pun intended. When running a magazine fed firearm the reloading process, even with one hand, is really pretty simple. Comparatively, reloading a revolver one handed is almost like climbing Mt. Everest. So in this article, we take a look at some methods for working through one-handed revolver reloads.

If you are not familiar with how to reload a revolver normally, the process usually goes something like this. First, you activate the cylinder latch and open cylinder. Next, you invert the gun so that the muzzle is pointed up (or mostly up). Then hit the ejector rod with the palm of a hand or thumb. Next, rotate the gun, so the muzzle is pointed down. Lastly, you source new ammo, place ammo in the gun, close cylinder, then go back to work. Depending on the technique used, there might be some passing the gun from one hand to the other in there too. There is a fair bit of complicated stuff that goes on inside of a revolver reload.

The first obstacle when trying to do this one handed is opening the cylinder. If the gun remains in the right hand, it starts off pretty straightforward. Activate the cylinder release with the right-hand thumb. Next, use the index finger to swing the cylinder out of the frame of the revolver. Now, we have our first set of options with how we remove the empty brass from the cylinder.

Option one is to slide the shooting hand forward on the revolver, placing the thumb behind the hammer and index finger around the front of the frame and use the middle finger to work the ejector rod. On revolvers with shorter ejector rods, like a J-frame, it may also be necessary to add a little downward momentum as the ejector rod is depressed to help assist the empty brass out of the cylinder. Try to avoid double pumping the ejector rod. This creates an opportunity for empty brass to get under the extractor star and foul up the whole process in a royal way.

Option two is to use our environment to help us. If there is a suitable ledge nearby, edge of a door frame, a table, or something similar, we can use that to depress the ejector rod for us. The key here is to try and find something that still allows us to elevate the muzzle of the gun at least a little bit as the brass is ejected. This will help the empty casings get clear of the cylinder and minimize the potential for a piece of brass to fall under the extractor star.

For reloading with the left hand only it starts off a little more complicated. We have to lay the revolver over in our hand, use the thumb to activate the cylinder release and the fingers to push the cylinder out of the frame. Once to this point, the revolver is well positioned to hold the revolver as we would for an FBI reload and use the thumb to depress the ejector rod. Same rules apply though, try not to pump the ejector rod, as this increases the likelihood of getting empty brass under the extractor star and jamming the gun up.

Once the revolver is unloaded, we have to free up our one working hand to access our spare ammunition. We have to stow the gun somewhere, and ideally, it will be somewhere that we can trap the cylinder in the open position and have relatively easy access to the back of the cylinder so that we can get ammunition back into the gun.

The old law enforcement method used to be to stuff the barrel of the gun behind the belt, ensuring the ejector rod is trapped on the outside of the belt to keep the cylinder open. This works well with “duty-sized” revolvers, and people who wear open front concealment garments like a vest or jacket with a tucked in shirt underneath. It doesn’t work nearly as well with a closed front concealment garment like a polo shirt, or with revolvers that have shorter barrels. The issues I consistently had with the technique were getting my cover shirt clear of the belt initially to secure the gun, and then keeping my shirt out of the gun as I completed the reload.

The other techniques I have also tried are just using the front pants pockets. Cylinder and ejector rod stays outside of the pocket while the front end of the gun goes in the pocket. This is a very clothing dependent technique. Some pants I wear it works great, and others it doesn’t. This will require experimentation for you to figure out if it will work with your revolver and pants choice.

A third option is just to place the revolver on the ground. It helps when doing that to secure the revolver in some way. So I put the toe of my shoe across the top of the frame and pressed against the cylinder slightly. I am not smashing the gun into the ground, just enough pressure to hold it there. This accomplishes several things for me. It keeps the cylinder in the open position, secures the gun so that it doesn’t move around on me while trying to reload it. It also helps to keep the cylinder from rotating if I am using a twist type loader like an HKS.

The downside here is the mobility is lost as well as the gun being in the dirt and whatever else is on the ground that might jam it up. If the gun needs to be loaded though, it is probably a risk worth taking.

The other big issue is that the gun is horizontal, so rounds will not drop into the cylinder if I am loading from a speedloader. In that instance, to complete the reload I have to be careful when I pick the gun up. I have to be sure to lift the grip before I lift the muzzle so that the rounds will drop into place. With a loader like the SL Variant or maybe even a Comp III that issue would be mitigated. But most people are not carrying around those types of loaders. This technique does work really well with speed strips though. 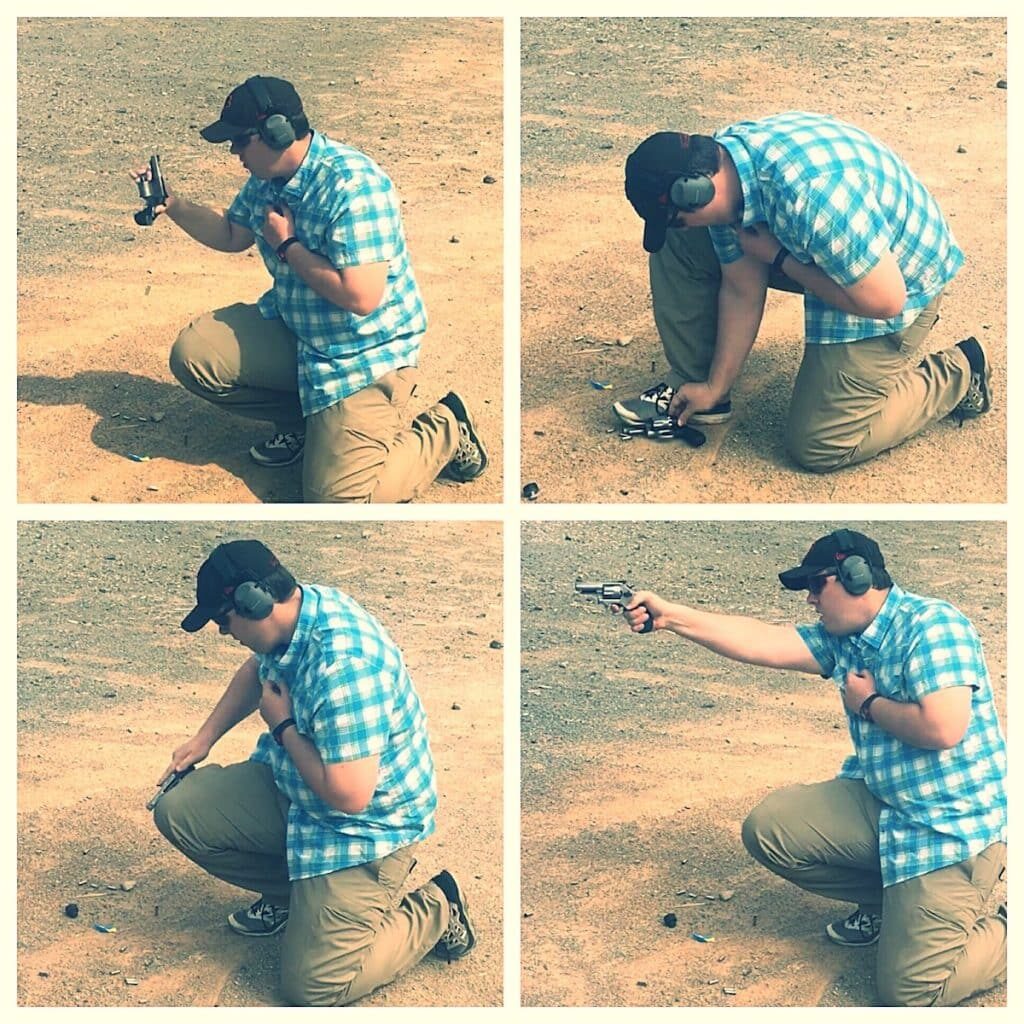 It is important to remember that even if you only put one or two rounds in the revolver, it is still a loaded gun. No rule says I have to get all five or six rounds back into the gun before I can go back to work. Once we have bullets back in the gun and reacquired our grip on the gun, we can close the cylinder by just pressing it against our body. Fortunately, that part of the whole process is pretty simple.

The keys are to set up equipment so that it is accessible from either side of the body. You should have a handful of viable technique options available, and practice, practice, practice. These are easy techniques to practice away from the range with some empty brass or dummy rounds. Make sure to follow the basic firearms safety rules. And keep all live ammunition well away from where any dry fire practice is taking place. A little time spent practicing a low probability, but high consequence skill can make the difference between success and failure. Even when everything else is going wrong.