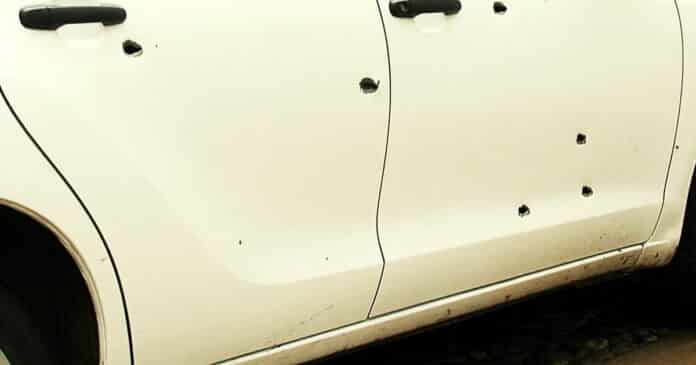 A Mister Money employee in Fargo had his day interrupted by an armed robber. The suspect left the business with an undisclosed amount of cash, but as the suspect was fleeing in his car, the employee, who has a concealed weapons permit, fired on the car multiple times.

Police apprehended the suspect, and he has been charged with multiple counts.

The County Attorney said it is too early to say whether charges will be filed against the employee.

He should have known better than to fire on a fleeing robber for a person who has supposedly had concealed carry training.

The store owner reportedly said that the employee had no intent to shoot the suspect but rather fired on the car just to make it more noticeable for police to find. While you have to give the employee credit for creative thinking, that excuse will likely not fly if charges are brought. Fortunately, the suspect was not hit with any of the at least six shots that struck the car.

You can watch a dashcam video of the incident here.

This sort of action is way more common than it should be. The victim of the armed attack or robbery experiences the fear of having a gun pointed at them. The suspect then leaves the scene, and the victim’s fear turns into anger which then manifests as fear that the suspect will get away, so the victim then fires on the suspect in an attempt to stop them from getting away.

Had the employee fired on the suspect while he was in the store, he likely would have been justified, but as it is, he should have just let him go and leave the search for police.

If your attacker moves to leave the scene without you having to engage them, let them go. That’s the most desirable outcome.