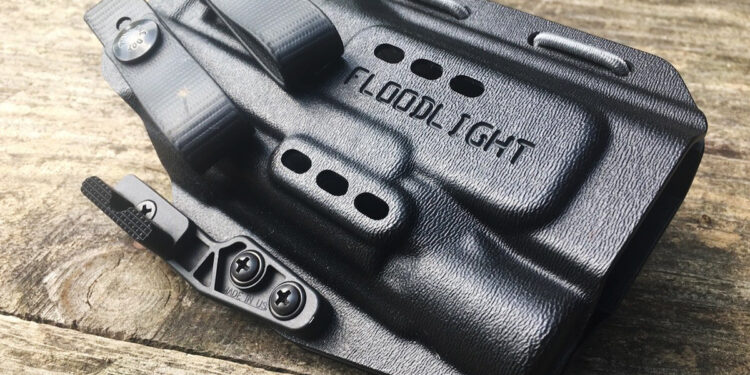 With weapon-mounted lights becoming the “cool guy” thing to have on concealed carry guns, holsters that can accommodate them are becoming more and more common. PHLster though has taken it to the next level with the Floodlight. Not only will it accommodate the light, it will also accommodate pretty much any pistol you can put on the light. And wait, there is more!! It is also completely ambidextrous. Let’s sum all this up. A holster that works right or left-handed, and can carry pretty much any gun that will fit a Surefire X300. Who would not want such a thing?

So how does this thing work? Jon Hauptman, the man behind PHLster, is a genius coming up with this design. The holsters primary retention is on the light, and adjustable in the usual way with a couple of screws and spacers. The “top” of the holster is held together with a bit of shock cord, allowing different guns to fit in the holster. The shock cord can be adjusted a few different ways to increase or decrease how tight the holster fits. This allows it to be set it up for use with different guns and to the user’s preference.

So far, the holster is confirmed to fit all the usual suspects from Glock, S&W M&P’s and SD series of pistols, a handful of CZ’s, Beretta’s, and HK’s, the Walther PPQ, and a couple of FN pistols. Oh, and 1911’s and 2011’s. I imagine that the list of guns that will fit in the holster is actually significantly longer than that. But that is what PHLster has confirmed so far. I tried the holster with a FN 509, a Glock 22, and a Sig 1911 with no issues.

To get the holster to be ambidextrous, the front and back of the holster are essentially mirror images of each other. All the mounting points on one side are also available on the other side. This is great from a “universal” holster perspective but comes with its own set of drawbacks that have to be considered.

Being ambidextrous means the holster cannot have a built-in wedge, like most other PHLster holsters. A sweat guard of any significance is out as well. For smaller people with less “biological body armor” than others, it is likely a non-issue. For dudes like me that have a bit of a tactical muffin top, we need both a wedge for concealment, and a sweat guard to improve access to the holster when holstering the handgun. The wedge problem is easy enough to fix, and indeed I did, but I can’t do much about the lack of a sweat guard. Everything comes at a cost.

Dialing In the Holster

It took about a week to get it dialed in to where I could carry the gun comfortable enough, and still have it conceal well. The holster comes with soft snap loops, or over hook clips. Not being a huge fan of clips, I opted for the soft loops. At first, I tried to carry the holster how I have been carrying every other AIWB holster, with a straight drop at about the 1:30 position on my belt. That didn’t work so well.

The holster has to be a certain length to allow for the light. This means even with a 4” gun, the holster is significantly longer than that. With the extra length, when I raised my right leg it would push against the holster. I had to rethink how I set up and carried the gun with this holster. I needed to move the muzzle closer to the centerline of my body. Because of my tactical muffin top, if I did that it would cause the print pretty badly. The solution was to dial in a bit of reverse cant. This moved the muzzle of the gun closer to where I needed it but kept the grip of the gun where I needed it to be to maximize concealment. Problem solved.

Phlster Floodlight Holster in Use

Once I was able to get the positioning dialed in, I set about giving the holster the fairest shake I could. In my day to day, it worked acceptably well. It concealed about as good as any other holster. The comfort level was acceptable. I was able to carry this holster setup for multiple 12 hour days without comfort issues so significant that they required special attention. Considering the bulk added by the weapon mounted light, that is impressive.

After a month of use, I think that while the PHLster floodlight isn’t perfect, if you have a need for a “universal” fit holster, this is the ticket and pretty much the only game in town worth considering, even at the $119 price point. The build quality is impeccable, and the mounting options are generous, allowing a lot of adjustment. With the included wing, and especially with a wedge added, the Floodlight is very concealable.

It comes with challenges. But those are more directly linked to wanting to carry a weapon-mounted light than the design or execution of the holster itself. Where this holster really shines, and what its purpose really is, is to allow the use of a single holster for multiple guns, or to accommodate a gun with a weapon-mounted light that doesn’t have a purpose-built holster available for it. If your needs fit the bill, this is the way to go.

For what this holster is trying to go, hide a gun and an attached light, it does an exceptional job.

What’s In Your Emergency Bag? 16 Things That Need To Be There…