Point of Impact: Choosing the Right Ammunition for your Defensive Handgun

Modern defensive handguns are typically designed with minimal provision for adjusting the sights. Because of this, defensive ammunition should be selected not only based on terminal performance but also on point of impact in relation to the sights in order to ensure predictable accuracy. 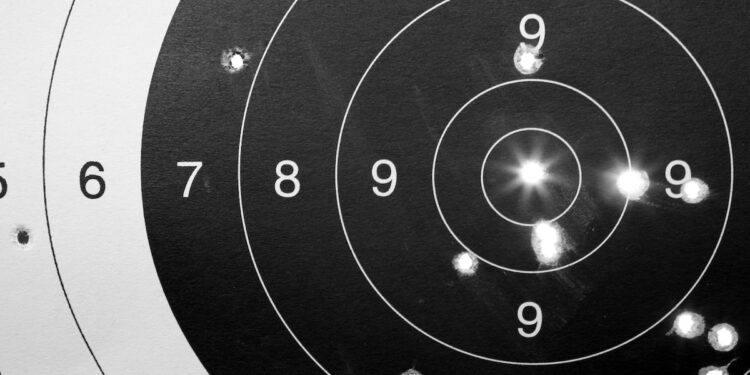 The ballistic performance of different ammunition can dramatically change the accuracy of a firearm. This concept is well known among rifle shooters who specifically select certain loads for accuracy requirements, whether that be for hunting or precision shooting. Different bullet weights, different powder charges, and even different bullet design, all factor into the accuracy potential of a given round. The individual firearm also has a substantial role to play. With rifles, the rate of the rifling twist within a barrel determines what bullet weight works best.

Now, with handguns, such ballistics are not considered nearly to the same extent as handguns are generally short-range weapons. However, even with handguns, different ammunition will dramatically influence the point of impact of the round.

The point of impact refers to where the bullet actually impacts in reference to where the sights are being held on target. This is a dynamic that all handgunners should be aware of. While such ballistics are far less complicated in a handgun than in a precision rifle built for long range accuracy, the point of impact of particular ammunition is actually a very important consideration. Whereas a precision rifle can be sighted in so that the point of impact of a chosen round hits where the crosshairs of the sighting system actually aim at given distances, most modern defensive handguns use fixed sights that limit adjustment to just windage (side-to-side) but do not facilitate easy elevation changes. This means that the selection of the right ammo is important when considering handgun accuracy, and a shooter should also be familiar with where the chosen round impacts at different distances.

Different bullet weights, and even different loads from the same manufacturer, will perform dramatically different in any given handgun. The only way to determine the point of impact of any chosen round is to experiment with it at different distances. This is a consideration overlooked by most as the range limitations of the handgun often obscure the reality that farther shots are possible and may be required due to the nature of modern threats. I humbly submit that having a thorough knowledge of where your bullets impact relative to the sight picture of your carry handgun is an important element of your preparation. In fact, I personally select ammunition not only based on terminal performance but on the point of impact as well.

Typically, modern defensive handguns are designed so that the bullet should impact precisely at the top of the front sight when it is aligned with equal height and equal light with the rear sight. The factors that influence this precision, however, is bullet weight, speed, and distance. Even at relatively short distances, as compared to rifles, of course, a handgun bullet will significantly drop, thus changing the point of impact. Therefore, some experimentation is in order. How do we determine the point of impact in our carry gun?

Select from the Proven Loads

To begin, select one of the modern leading defensive rounds, two top suggestions that come to mind are Speer Gold Dot and Federal HST, though there are a number of others; do some research and choose accordingly. At the range do some slow fire working on utmost accuracy. I like to do this at 10 yards, 25 yards, and also at 50 yards. This gives you an idea of where the round is impacting in relationship to your sights at those different distances. Bear in mind that as you reach out to farther ranges, you inevitably will need to adjust your hold, but only doing this experiment will show you where that different hold comes into play.

Most of the good modern rounds are quite accurate in any of the modern handguns, but you may find one round will out-perform another. If you find that a round that you have selected does not impact in accordance with your sights at reasonable distances, then try a different round. Even among ammunition produced by the same manufacturer you may find improved accuracy by going to a different bullet weight. You will find variance between 115 grain versus 147 grain 9mm, for example, or between 185 grain and 230 grain 45 ACP. While you may like the idea of one bullet weight versus the other a more predictable point of impact is likely the more valuable feature of any given load.

Once you settle on a self-defense round that shoots well, you may find it difficult to find practice ammo that has a similar point of impact. The bottom line is that the self-defense round needs to take priority. Budget practice ammo is almost always going to be less accurate than premium defensive loads. You might settle on a practice round that works as well as possible, but it is likely to have variance from the defensive round. As long as it is a decent practice round it should provide enough accuracy for training, but it is worth firing some of your carry ammo periodically to not only verify its reliability but also re-confirm the precise point of impact in your gun.

Adjustment or Replacement of Sights

Most modern defensive handguns do not offer much flexibility for sight adjustment. Small guns such as pocket autos or pocket revolvers usually provide only fixed sights. With these guns, the use of bullet weights that hit to the point of impact becomes truly imperative. Larger handguns usually provide only windage adjustment with a rear sight that can be drifted to fix the point of impact on the horizontal plane (you can drift the rear sight to fix accuracy issues that are too far left or right). Typically, however, the elevation can’t be adjusted on these guns, so choosing the right ammo is important. However, in the event that you have a handgun that is dramatically off with any ammo you try you can replace the front sight. For example, if the gun shoots consistently high, replacing the front sight with a higher front post can fix the issue.

In closing, most shooters do not consider the point of impact in their chosen gun and ammunition combination, and I would urge you to dedicate some time to working out this issue. The need to make a further shot with a handgun remains a low probability, but modern threats such as active shooters and terrorist activity demonstrate that it is a possibility. Knowing your point of impact will foster your ability to reach out further with your carry gun.

When To Sell Your Concealed Carry Pistol