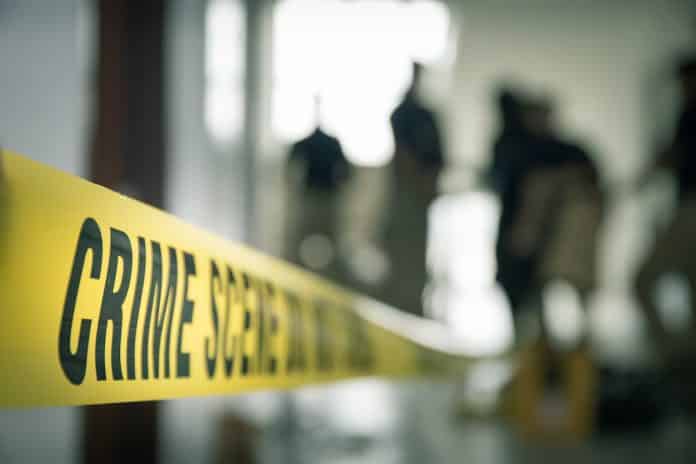 On Sunday, Aug. 9 around 4:30 AM in Brandon, FL, a man knocks on the door of an apartment home. The woman resident cracks open the door to see who’s there and a man pushes the door open to gain entry.

An argument ensues between the two and then another man, who was already in the apartment at the time, enters the confrontation. The whole thing escalates until the intruder shoots the other man at least once.

This causes the woman to retreat to a bedroom and return with a gun. The argument between her and the intruder continues until the two start shooting at each other. When the police arrive, they find the intruder dead in the doorway of the unit. Somehow, the woman was not hurt in the exchange of gunfire.

“We believe the decedent and woman involved in this shooting knew each other,” said the local Sheriff in a news release. “We are still investigating the events that led up to this incident; however, it does appear domestic in nature.” via PATCH.COM

Can you just picture these three all arguing while the intruder is waving his gun around until he finally loses it and pulls the trigger on the other man? The woman leaves the room to get a gun but then returns to the fight. That doesn’t show fear for her life. That shows wanting to adjust the intruder’s behavior with maybe a little revenge thrown in. Leaving and then coming back to a fight never looks like self-defense. Maybe the intruder finally feared for his life and was trying to defend himself. Where the intruder was shot could maybe tell us a lot.

One of the key elements of any self-defense case is innocence. In order to justifiably use deadly force in self-defense, you must be an innocent party. You cannot have started the fight, escalated the fight, or been a mutual combatant in the fight. The woman retreating from the fight and then re-engaging would also show that she made no attempt to avoid further confrontation.

I would not be surprised if serious felony charges were brought in this case.

The lesson for the rest of us? Don’t ever crack open a door to see who’s out there if you are not sure it’s safe. Especially at 4:30 in the morning.

I usually advocate not returning to the fight once you’ve reached a place of safety, but there are two mitigating factors here. The first is that the armed intruder was still inside the residence and still represented a threat, and the second is the presence of a person who was already shot and may have been down and in grave danger from the original assailant. We’ll see what happens