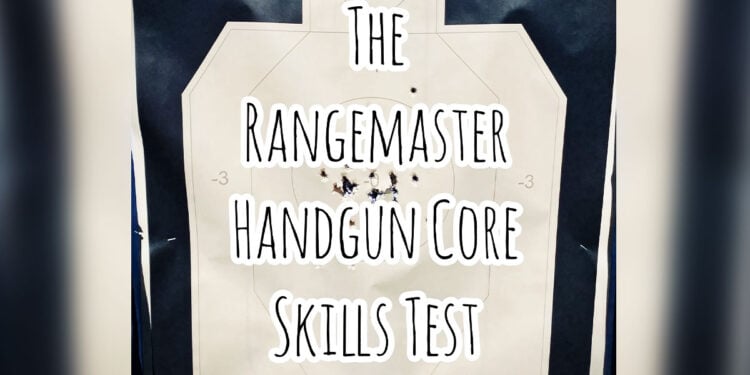 With the ammunition market starting to stabilize (we can at least find what we need now), it is time to start getting back after the skill development. After a nice long lull in the live-fire training and practice, a good way to step back into the arena is to actually see where you are. Figure out what has been lost, and also set a landmark for future building. I just happen to have the perfect course of fire for this occasion.

Tom Givens of Rangemaster (you should recognize that name) has a Handgun Core Skills Tests that is perfect for this task. It is a 40 round course of fire laid out very similarly to a law enforcement qualification course. What is different is how it is scored. It uses “hit factor” scoring, which means the same course of fire will work regardless of skill level. This course of fire will literally work for anyone who has a range that will allow it.

The key skills tested are, of course, reasonable amounts of accuracy at speed, a dash of strong hand only and support hand only shooting, a single slide lock reload, a handful of draws, and an array of distances weighted toward the short end.

To complete the course of fire, you will need one shot timer, a handgun with at least a couple of magazines, your everyday carry gear, and either an IDPA target, IALEFI-Q, or Rangemaster Q target. I used an IDPA target because that is what I am most likely to have handy most of the time.

The scoring works as follows. Hits in the -0 are worth 5 points, the -1 is 3 points, anywhere else is 0 points. You have to track your time per string and then add them all together at the end. If you have a CED7000, you can use the cumulative setting to get a total time at the end. Calculate your points, and then divide your time by the points. This number is called the Index. You will then multiply the Index by 20 for the actual point value.

Because of the scoring system used, there is a precarious balance between good enough hits and quick enough times. You really need both to pull off a good score. Anything above 100 is considered a decent score. Over 125 is considered a really good score.

This is a very well-balanced course of fire. The bulk of the work is inside of 7 yards—realistic distances for defensive hundgunnery. The course of fire doesn’t neglect needing skill beyond that, though, and failure at 15 or 25 yards will hurt the score quite a bit.

Personally, I found the closer strings of fire to be the trickiest. It is really tempting to try and Ricky Bobby those strings and slam into the wall while doing it. The further strings of fire are well within my wheelhouse, but other people with different skill sets might find differently. I think my one-handed shooting is where I could stand to make the most improvement. I hardly spend any time shooting one-handed, and it hurt me on the two one-handed strings.

This is the beauty of this course of fire. It is hitting all the high points, and if looked at carefully, it will tell you where you need the most work. It is a box of ammo well spent to identify what might need the most work and give a benchmark to look back on later. If you give it a try, drop your score in the comments.

It’s a great skills test, but very few ranges will allow one to draw from a holster and move about, so it’s nearly impossible for most of us to be able to accomplish it.