by Salvatore
in Articles, Concealed Carry
2 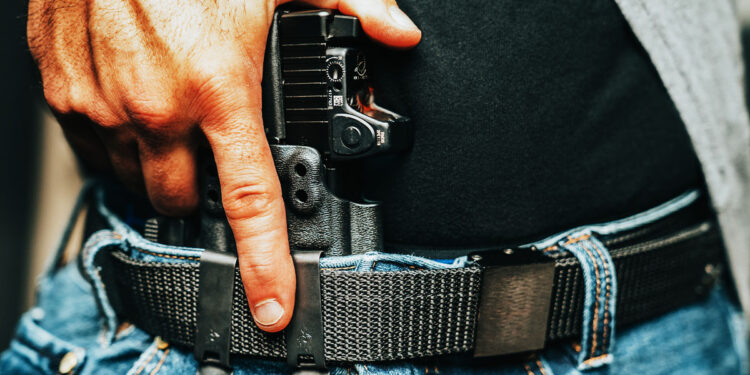 A recent event witnessed a heroic concealed carrier who neutralized an active shooter get killed by a responding officer in a case of mistaken identity. It appears that this tragedy can be greatly attributed to the fact that the concealed carrier picked up the rifle that the downed killer had dropped, thus appearing to be the killer when responding police arrived. Regardless, this tragedy is a reminder that having a gun in hand may be necessary in the face of violence, but holding that firearm puts a target on your back when police, or other concealed carriers in the vicinity, arrive. This is a growing concern for concealed carriers.

The reality is that holding a long gun, either after taking it from an attacker as in this referenced incident or if holding your own taken from your own vehicle to respond to violence, can get you killed really fast. The safest way to deal with an active killer, or any other violent threat, while in public is to do so with your concealed pistol. For those that proclaim the futility of going up against bad guys with rifles using only your pistol, I point out that several events in the past year alone have witnessed concealed carriers prevailing against rifle-holding threats with aplomb. It can be done, and it can be done well, and it has been done many times. However, recent events also illustrate that concealment remains a critical component of safety after the violence has occurred, not just before.

The fact that police will arrive at a scene of violence in which you are a participant, potentially quickly and unexpectedly, must be considered. Also, an armed citizen like you may be present and may assume that you, a good guy who just used force to stop the real bad guy, is actually the bad guy. Mistaken identity of this sort has happened a number of times and, unfortunately, will likely continue to happen. Therefore, what is the most workable mitigation for this circumstance? I propose that it is to only draw the gun when the threat is in striking distance and to re-holster the gun as soon as the recognized threat(s) are neutralized.

The Need for an Efficient Draw from Concealment

The pushback against this concept among many concealed carriers appears to be related to a lack of confidence in being able to deploy the gun quickly. A fast and efficient draw goes a long way towards building the confidence to put the gun away after neutralization, or to keep it concealed up until the threat is clearly in range. A gun in hand will always be faster, but a concealed carrier with a good draw can deploy the gun from concealment rapidly enough to deal with such a situation. Our world witnesses rapid police response and many armed citizens in most places, so this reality dictates concealment at all times except when the gun is actually needed to immediately stop a lethal threat.

A blazing fast draw stroke is a good thing, but the reality is, a safe and efficient draw that does not necessarily set speed records is what matters most. Can you draw the gun consistently, from the holster you utilize, from under the clothing you wear, consistently? I would rather see a shooter have a two-second draw to an A zone hit that they can do every single time than a one-second draw to a frequent miss. Build a consistent draw and measure it so that you know your exact capability in the deployment of the gun.

Degrees of Concealment During Pre-Engagement

Active killer events tend to be significantly different in dynamic compared to other crime. Most often, the sound of gunfire is the first tell that such an attack is underway. Unless a concealed carrier on scene is the first individual to be ambushed and killed by surprise they will likely have a little time to try and get a sense of what is happening. I would submit that a killer who starts a rampage while right in the room that you occupy warrants an immediate force response; namely, a rapid draw of the gun to immediate gunfire on the threat.

However, most of these incidents involve larger spaces in public places, and often the sound of gunfire is the only initial indicator of the threat. If the first manifestation of violence is only the sound of gunfire and you have no clear visibility of the immediate danger, I submit that the gun should stay holstered until you can assess the situation. Remember that any other concealed carriers in the vicinity will also hear gunfire, and if you immediately draw your gun, they will see what they are looking for: a guy holding a gun. Keep the gun holstered until you know what is happening and clearly identify the danger.

If you move towards the sound of gunfire to seek out the threat and you wish to get a head start on the draw process I still discourage actually having the gun in hand at that point. However, getting a firing grip on the holstered gun, which will cut your draw time in half, may be in order. Any other armed responders are looking for a suspect with a gun in hand, and having a hand on the still-holstered gun is certainly more attention-drawing than not touching the gun, but far less likely to draw gunfire from responders than having the gun in hand. Another tactic is to draw the gun and have it in the dominant hand in a tucked-in position sul and cover it from view with the support hand. This is better than to carry it in a ready position for all to see, but I am inclined to strongly suggest keeping the gun in the holster while moving.

Once the threat is found and identified, and you can clearly determine it is the threat and not another concealed carrier in the vicinity like yourself, only then should the pistol come out to solve the problem.

If the threat is found and dealt with then you must consider the optics of yourself standing with a smoking gun in hand. There is the possibility of other concealed carriers closing in on your position, and the obvious likelihood of police officers rapidly closing in. The gun must be out of your hands as soon as possible. The safest place to put the gun for dealing with responding officers is off body, perhaps on the ground, and away from you. However, in a situation where you well may need the gun again, I would be hesitant to divorce myself from my weapon. Therefore, re-holstering and keeping your hand off the gun is probably the best compromise.

If police officers respond you must listen to their commands carefully and do as you are told. If asked where the gun is declare that you are a good guy and a concealed carrier. Keep your hands over your heads, and do not, under any circumstances, reach for your holstered gun. If they tell you to put the gun on the ground, do not touch the gun or reach for it, no matter what they say. Keep your hands high and tell the officers they will need to remove the gun themselves. A tense situation in which you reach towards your waistline can get you shot very quickly.

We must accept that, if facing violence and forced to act, there is no way to completely avoid risk. However, if we train to keep the gun concealed at all times except for the moment it is needed, we can greatly mitigate the risk of getting killed in a situation of mistaken identity. It is a dangerous world and active killer scenarios are a particularly hazardous form of violence that the modern self-defender must consider.