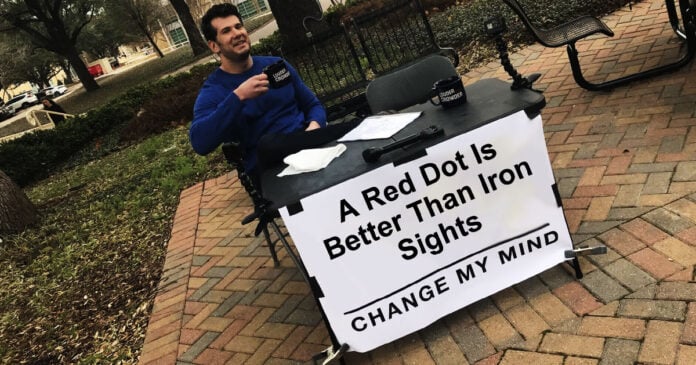 “An RDS on pistols is the future” is by now a cliche…but it’s true.

It might seem counterintuitive, given that early micro red dots (*coughs*Trijicon!*coughs*) had less than a stellar reputation for reliability and that iron sights have been used successfully for…well, several hundred years.

Another gadget we “have” to buy. Oh…lucky…us.

However, the truth is that optics of any sort are more efficient and ultimately better for the task of shooting a target (hostile or paper) than iron sights. It isn’t because of trickery. It’s actually according to science. 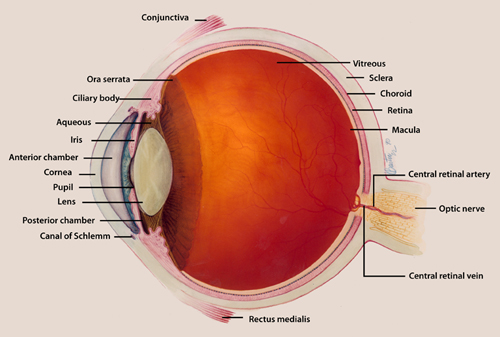 With iron sights, you’re stacking three images on top of each other. You’re looking at the front sight through the rear sights, which are aligned over the target.

And that is at odds with how the human eye actually works.

The human eye works a lot like a camera. In fact, a lot of mammals – including humans – are literally classified as having “camera-type eyes.” Peripheral vision is like a wide image. When you focus, it’s like using the zoom function.

When the eye focuses, a cluster of eye cells – the fovea centralis – reduces the intensity of the signal from the rest of the vision cones, boosting their own and producing a detailed image. It’s not that you lose peripheral vision, but that peripheral vision loses definition.

It’s not that you or plenty of people can’t shoot really, really well with iron sights. You (maybe) can, and plenty do.

It’s that an optic is more efficient, more in harmony with how the human eye works given that you’re contrasting one object in focus (the target or the dot) on another that isn’t, rather than having to align the object in focus (i.e., the front sight) with the rear sight and the target.

Toss in the loss of farsighted vision due to genetics or age. Having a single dot at the rear of the gun is better than a sight at the front.

In short, humans are anatomically better-suited to using an optic.

Red dot sights are a new form of reflex sights invented in the early 20th century. They’ve been used in artillery and anti-aircraft sighting systems for decades.

As far as military use, the Occluded Eye Gunsight used by special operations personnel during the Vietnam war (especially the Son Tay raid) used essentially the same principles as a red dot.

The idea caught on.

According to Larry Vickers, Delta Force were using early Aimpoint red dot sights on their carbines by the late 1980s. Delta operators were using them in the Battle of Mogadishu, and Aimpoint 2000 RDS optics are issued by multiple militaries, including our own, to this day.

They are proven on rifles.

What about on pistols?

Practical Use Of Pistol Optics

Competition shooters were using them by the 1980s but didn’t get taken with the utmost of seriousness until Doug Koenig started winning Steel Challenge championships with red dot optics in the 90s.

Red dots aren’t standard-issue on service pistols for many militaries or police agencies, but there are some early adopters and data about their use.

A survey on Police1 indicated that officers involved in shootings who used a red dot were very satisfied with them. Their data doesn’t prove red dots resulted in more accurate or faster shots on target, but there’s enough to suggest they might be beneficial.

An actual “lab” experiment conducted by criminology profs from Norwich University, which used an experiment group with red dots on pistols and a control group with irons, ran shooters through three drills shooting at an IDPA silhouette.

According to Gun Digest, the red dot group scored 58 percent A zone hits compared to 42 percent of the iron sight group.

Sage Dynamics published a white paper addressing the use of red dots in a law enforcement setting, with some interesting findings.

Gathering over 5 years of data in training and after-action reports, they found a number of advantages based on both human physiology and field use, including:

So…we don’t have any conclusive data yet proving beyond a shadow of a doubt that red dot sights are more effective for defensive shooting than iron sights on pistols. However, what is it that we do have?

First, there is strong evidence that the human eye is far better suited to using an optical sight with a single focal plane than the multiple focal planes of iron sights.

We tend to focus on the target during periods of extreme stress. Our eyes are better able to bring the dot to the threat and fire rather than bring sights to the target, align them, and fire. It’s more efficient and more in harmony with what the brain and visual system both under stress and when not under stress.

The reticle of red dot sights is illuminated, meaning we will – objectively – always see it better.

Suffice to say that unless damning evidence emerges to the contrary, it appears that red dots – and indeed, any optic – are a better sighting system than irons are. Given also that there are already reliable, affordable options on the market right now (Holosun FTW), the reasons not to use them are seemingly beginning to diminish.