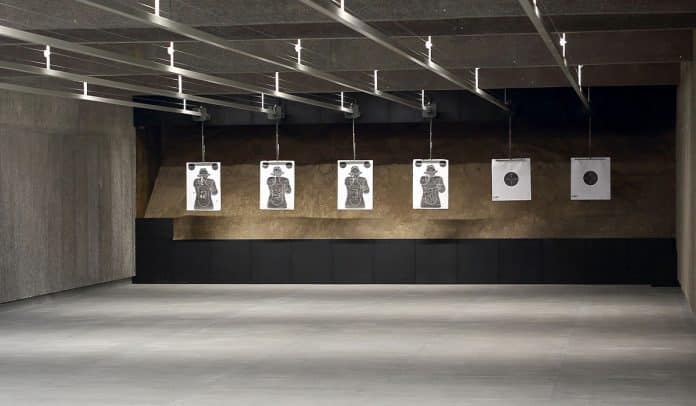 This is a two-part article about the very important factors and solutions for reducing lead exposure when shooting and handling firearms. This part covers the primary sources for exposure to lead, the significant lead risks and health dangers, the lead exposure limits for adults, children, and gun range workers, the effects of excessive lead on parts of the body, specific concerns for lead exposure when shooting, handling, and cleaning a gun, and symptoms of lead poisoning.

The second part will address blood lead level concerns and research about the effects of gun calibers and related lead hazards, comparisons between indoor and outdoor shooting ranges and lead risks, frangible bullets, and fragmentation, recommended lead-free bullets, primers, and frangible ammo, some manufacturers of non-lead bullets, and 15 practical tips as solutions for reducing lead exposure and minimizing health hazards.

Work, Fun, and Self-Defense Gun Use and Lead

There are many of us gun enthusiasts and recreational shooters. And we enjoy target practicing and just handling a gun and plinking, not to mention others that instruct pistol classes and shoot competitively. And shooting guns at firing ranges is an occupational necessity for security personnel, law enforcement officers, and members of the military. Increasingly shooting a gun has become a major recreational activity for the public and, of course, a necessity for concealed carriers, self-defense, and personal protection. In the United States alone, there are an estimated at least 20,000 shooting ranges, so think of the many folks involved in shooting a gun, the high level of lead exposures, and the frequencies of gun use.

Of course, shooting a gun involves lead and it can be a health hazard. Lead is the heaviest and softest of the metals and exposure to it has proven to be very dangerous to a lot of individuals. So what are we as gun and shooting enthusiasts to do about lead risks? I want to answer some questions I have (and maybe you have the same questions you want to be answered) about lead exposure, lead poisoning, possible health hazards, some lead-free alternatives for shooting, and how to reduce lead exposure while enjoying our hobby of shooting and handling a gun.

Questions About Lead Hazards and Guns

Here are some questions I have about lead hazards, handling, and shooting guns. I want to give you some of my opinions, research data, and later in Part 2 my 15 tips as just some possible solutions, plus some non-lead alternatives when shooting.

Primary Sources for Exposure to Lead

We recognize from the past that lead is a common metal that has been used for thousands of years. And we know that it is a poison and that we are exposed to lead in drinking water, in buildings built before 1978, leaded gasoline, battery recycling, book printing, lead remaining in the soil from various activities and previous shooting, and lead in the air and dust naturally around us. The U.S. Environmental Protection Agency (EPA) says humans today are “primarily exposed to lead through ingestion, which is the consumption of lead or lead-contaminated materials, or by inhalation.”

NOTE: Lead toxicity may be caused through fruits and vegetables contaminated with high lead levels from the soils where they were grown.

Further, the EPA says the main human exposure to lead associated with outdoor shooting ranges is through lead-contaminated soil. The National Shooting Sports Foundation estimates based on only their registrations show that there are at least about 2,000 commercial outdoor shooting ranges in the U.S. Probably there are many thousands of other ranges, like indoor ranges (estimated to be about 18,000), private and public ranges, trap and skeet ranges, sporting clays, and cowboy action shooting. And think of the many millions of U.S. shooters. So lead has positive and negative considerations for many folks and we must be aware of its dangerous contamination and health risks.

Don’t panic, we can reduce our lead exposure, and there are certain things we can do (which I suggest below), regarding the statements which follow. Understand that while we want to reduce lead exposure, most people do not shoot enough or spend that great amount of time at gun ranges for there to be a very serious risk. The highest risks usually are for those who shoot a lot regularly, especially at indoor shooting ranges, and to firearms instructors and range employees.

“If totally dissolved in the water supply, the lead contained in a single bullet could contaminate the amount of water consumed daily by hundreds of thousands of people,” according to the EPA’s Environmental Working Group’s study.”

The EPA says, for example, that a “9mm Luger handgun bullet contains 7.5 grams (only 0.0165347 pounds) of lead in a single bullet. This one bullet can contaminate the amount of water consumed daily by 496,800 people,” according to the data in their EPA study. I am concerned about my regular shooting activities and frequent range classes. I plan to continue taking specific precautions and will give you my suggestions and my specific 15 tips later below.

The U.S. Centers for Disease Control and Prevention and the World Health Organization state that lead may impair development (especially in young children) and has harmful effects even at low levels. The Mayo Clinic’s Children’s Center says “young children are at the greatest risk due to their developing brain and nervous system.”

TIP: “There is no amount of lead exposure known to be completely safe for children.”

NOTE: About 95% of lead is stored in an adult’s bones and teeth, according to the National Institutes of Health.

Lead is the heaviest and softest of the common metals and it is documented that exposure in adults can result in:

So, lead exposure is an important shooting risk to understand and we can take certain actions and recognize the precautions for our health and to minimize exposure.

Keep in mind that ideally, immediate cessation of shooting exposures at ranges should not be based on a single blood level measurement, so be sure and consult your medical doctor for tests and their frequencies.

For occupational shooters and gun range workers, the U.S. Occupational Safety and Health Administration standards at this time require workers to be removed from lead exposure when their blood lead level is equal to or greater than 60 micrograms of lead per deciliter of blood (ug/dL) and allow them to return to work when their level is below 40 ug/dL, according to the National Institutes for Health. These limits change, so check the current standards.

TIP: Clinical manifestations of lead vary significantly from individual to individual depending on environmental factors and specific medical conditions and profiles, so consult your medical doctor.

Major Effects of Lead Exposure on the Body 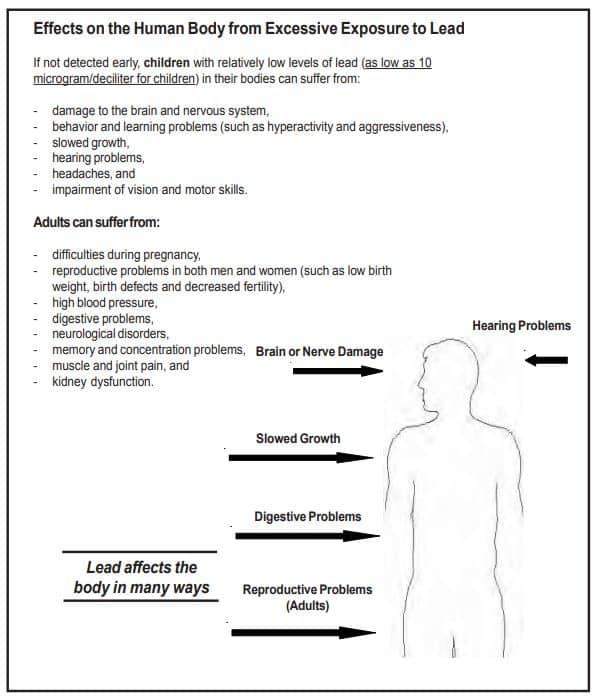 TIP: People can have lead poisoning and not even know they have it. A blood test is the only way to measure the amount of lead in the body.

For example, the U.S. Department of Labor recommends that employees working in high-lead environments have a blood test every six months. So, it makes sense to me that shooting range workers and frequent shooters at a range be tested every six months (some recommend every three months depending on the nature of the job) for health reasons.

TIP: Understand that a routine blood test only gives an account of lead present in circulating blood, but usually cannot show how much lead is stored in the body.

Lead Contamination When Shooting, Handling, and Cleaning a Gun:

NOTE: The primer in a firearm is the chemical and/or device responsible for initiating the propellant combustion that will push the bullet out of the gun’s barrel. The gun’s firing pin hits the chemical primer material and causes it to explode, sending a small spark and flame into the ammo casing that contains gunpowder. 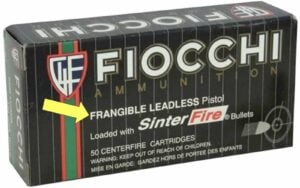 NOTE: Bullets are made of a variety of materials, such as lead, copper, steel, polymer, rubber, and even wax sometimes. Most commonly bullets are made in the form of metallic cartridges and with lead encased usually in a copper jacket. Most, but not all, bullets are made with lead, typically at least 50% lead and up to 95% lead content. Per Wikipedia, lead is widely used because it is very dense with a large mass, has high kinetic energy, is cheap, easy to obtain, and easy to fabricate.

NOTE: All “frangible” bullets are lead-free and usually made of powdered metal such as copper, zinc, tin, tungsten, iron, steel, and/or polymer.

Lead poisoning causes a variety of symptoms, including abnormal behavior which varies from person to person, according to a 2005 study by Kosnett. There is also a 2005 study by Mycyk that says there are further studies that show no symptoms of lead poisoning even with elevated levels of lead in the body. So this is an inexact science and unexplainable differences occur.

It is reported that blood lead levels from 25 to 60 ug/dL may show delayed reaction times, irritability, difficulty in concentrating, and numbness and tingling in fingers and hands, all very essential factors in handgun and self-defense shooting. Anemia may appear at blood lead levels higher than 50 ug/dL and brain swelling, delirium, coma, and seizures may occur at levels greater than 100 ug/dL.

The next article contains Part 2 which will focus on research data about various gun calibers and lead concentrations, indoor and outdoor shooting ranges, and blood lead levels. Also, the state requirements of non-lead ammo, frangible bullets, and factors that increase fragmentation, lead-free and non-toxic alternatives for primers and bullets, and my 15 practical tips and suggestions for minimizing lead exposure and health hazards.

Thanks to the following frangible and/or lead-free bullets, primers, and ammo manufacturers for their assistance:

* This personal opinion article is meant for general information & educational purposes only and the author strongly recommends that you seek whatsoever.counsel from an attorney for legal advice and your own personal certified weapons trainer for proper guidance about shooting & using YOUR firearms, self-defense and concealed carry. It should not be relied upon as accurate for all shooters & the author assumes no responsibility for anyone’s use of the information and shall not be liable for any improper or incorrect use of the information or any damages or injuries incurred.

© 2020 Col Benjamin Findley. All Rights Reserved. This article may not be reprinted or reproduced in whole or in part by mechanical means, photocopying, electronic reproduction, scanning, or any other means without prior written permission. For copyright information, contact Col Ben Findley at [email protected].