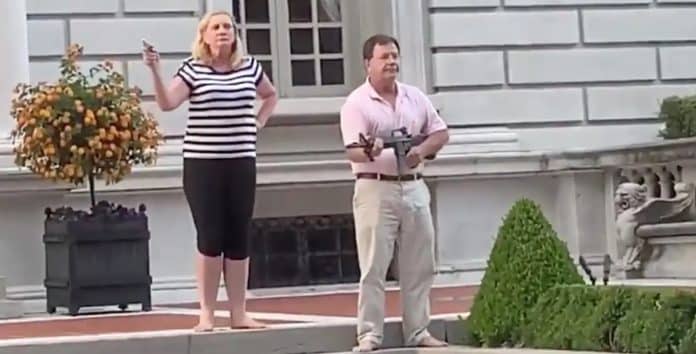 There’s already been a lot written about this story, so I’ll leave you to those other accounts if you want to dive into all the (somewhat conflicting) details. The gist of the story though, is that a group of protesters broke down a gate in order to enter a private community apparently on their way to the St. Louis Mayor’s home to protest some of the Mayor’s actions regarding discussions to defund police.

In the process, the group got close enough to one home to catch the attention of the couple that was in the home. The couple called St. Louis police and reported that they “observed a large group of subjects forcefully break an iron gate marked with ‘No Trespassing’ and ‘Private Street’ signs.”

According to a police summary:

“Once through the gate, the victims advised the group that they were on a private street and trespassing and told them to leave.”

“The group began yelling obscenities and threats of harm to both victims. When the victims observed multiple subjects who were armed, they then armed themselves and contacted police.”

It’s a bit sketchy as to whether the group was in this couple’s yard or just inside the private community when they confronted them, but either way, confronting a group of protesters is a very risky move as that can cause them to become an angry mob in seconds. Yes, the protesters were trespassing on private property, and they did break something to do so, but it doesn’t appear that they were initially targeting this couple’s home but rather trying to make their way to the Mayor’s home.

Of course, all that changed when the couple confronted them. Now they suddenly have a new place to direct their anger. Remember that mobs are infinitely self-righteous. Anything they are doing is justified in their collective minds, and anyone that opposes them deserves whatever they decide to do to them. Your best defense against a mob, besides avoiding them altogether, is to somehow not catch their attention.

It has been reported by some that the couple had every right to defend their property, but that is simply not true. Nowhere in this country, except Texas and even then it has to be at night, is it legal to use deadly force to protect property.

Yes, the couple said that they were threatened.

“We were told that we would be killed, our home burned and our dog killed.”

Sure multiple armed subjects and even an angry mob all by itself is easily a deadly force threat, but could it be argued that the couple left the relative safety of their home to confront the group and thereby initiated the confrontation.

What about the Castle Doctrine and the fact that Missouri is a Stand Your Ground state? Whether Castle Doctrine applies depends on whether Missouri law recognizes the homes curtilage, in this case, the yard immediately around the home, as part of the home. Not all states do. If not, then Castle Doctrine is irrelevant here.

There are two flavors of Stand Your Ground law. If Missouri is a “hard” Stand Your Ground state, then there is no duty to retreat before using force, period. If Missouri is a “soft” Stand Your Ground state, then there is not a legal duty to retreat, but the prosecution can still argue that a “reasonable” person would have anyway. Neither one of these, however, automatically gives anyone the right to shoot just because they are in fear for their lives. All other use of force conditions still needs to be in place before deadly force used in self-defense is justified. (If you don’t know what those are it’s time to go to school)

This couple’s actions seemed to have worked out for them this time (charges still could be pending?) but what if someone in the crowd had fired on them. (The couple claimed multiple subjects were armed) Were they prepared to fire into the crowd if it began to move toward them? The crowd was reported to be around 500. What if the entire crowd, angered by the couple’s actions, decided to rush the house? How would they have defended against that?

In the end, confronting a mob like this is really a bluff of deadly force that one hopes will deter the crowd and cause them to move on. Would you really want to take on a crowd of 500 with one AR and a handgun? Even if you did win the physical fight, would you want to expose yourself to all the potential legal troubles that would inevitably follow, not to mention the emotional, social, and professional repercussions? Would the legal expenses far outweigh the costs of any damage done?

As hard as it may be to watch a mob destroy your property (no report I saw indicated that the mob broke anything more than the gate to gain entry to the property, they apparently were not doing anything but passing through I cannot confirm that), the safest thing to do, both physically and legally, is to stay in the relative safety of your home, call the police and hope they respond quickly and don’t do anything to draw the mobs attention.

No, it’s not fair or right, but stuff can be replaced. Your life and/or your freedom cannot.