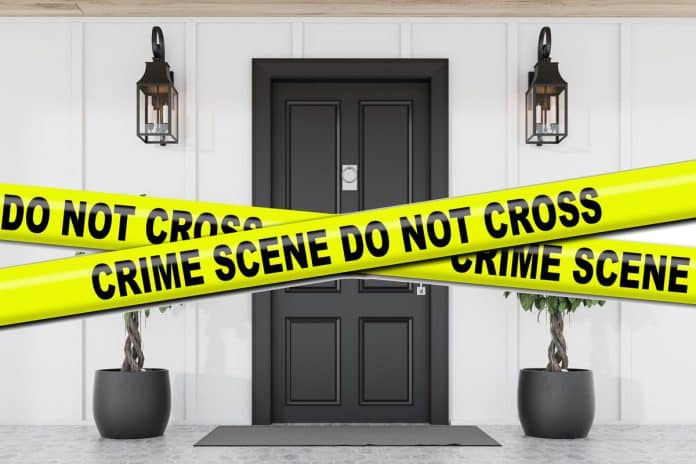 About 9:00 pm a Gwinnett County, Georgia man was in his bedroom when he heard someone banging loudly on his back door. The resident told police that he grabbed his gun and fired two or three shots through the door. He then opened the door to find a man screaming with a gunshot wound in his leg.

At this point, the resident closed and locked the door and then called 911. The burglary suspect was taken to the hospital and is expected to recover.

Police said that no charges will be filed against the resident for the shooting. The suspect faces first-degree burglary charges.

This is one of those cases that are dangerous examples to concealed carriers who know little to nothing about self-defense law because it would seem to show that it’s ok to shoot a potential home invader or burglar through the door before they actually enter the home.

Nothing could be further from the truth.

Besides grossly violating gun safety rule number 4, ”Know your target and what’s beyond it,” banging on someone’s door is not a crime in and of itself, and it’s certainly not a deadly force threat. Imagine if the person banging on the door had been an innocent young lady seeking help after having been in a car accident. There’s a man right now in prison who was convicted of murder for just that situation.

A man banging on your door, as long as they remain on the other side of the door, is not an imminent deadly force threat. Yes, take up your gun but then call 911 and go to a defensible location in your home and hope the police get there before the potential intruder breaks in. Maybe they give up and go away on their own?

Once someone does physically break through your door, your legal justification for the use of deadly force greatly improves, but what if the individual breaking into your home realizes they are in the wrong house? If you can still avoid shooting them, you can avoid getting drawn into a legal investigation, which could cost you thousands of dollars in legal fees even though you may have been within the law to do so.

It’s also important to once again remind everyone that the police do not get to decide if someone gets charged with a crime, as so many news stories will state. That decision rests with the county prosecutor’s office. So while this news report would seem to indicate that this resident “got away with” shooting the suspect through the door, this may very well not be the end of the legal story for him.

In my non-lawyer opinion, attempted murder charges are not beyond the realm of possibility. And the two rounds that missed could result in reckless endangerment charges. Not to mention that the suspect could sue for civil damages for the injuries the resident inflicted on him.