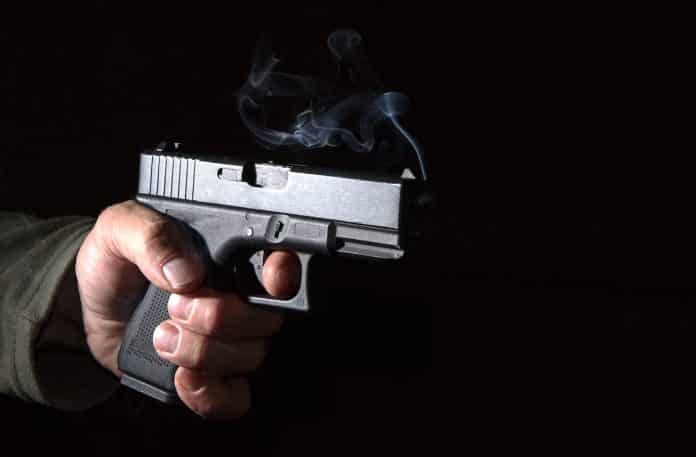 One of the reasons why criminals are so dangerous is because of some of the insanely stupid things that they attempt to do.

In Wilkes-Barre, PA just before 10 P.M on April 13th. 2020, a man enters the rear kitchen door of a home and asks to buy a bottle of liquor. Residents in the home rightly tell him to get out but he pulls a handgun and points it at one of the residents.

Another person in the home grabs the invader’s arm and a struggle ensues. Someone in the home then fires a shot at the invader hitting him in the leg which causes him to flee.

As the attacker is fleeing through the back yard and over a six-foot-high fence, the defender fired two more shots at him. Both of the shots missed.

The invader then runs to his girlfriend’s car and she takes him to a hospital. He is eventually charged with a long list of felonies not the least of which is illegal possession of a firearm. Imagine that.

This is one of those cases where the residents of the home start out legally defending themselves but then cross some legal lines that could result in serious charges, prison time, and major legal expenses.

Let’s start with the obvious. Keep your doors locked. The attacker apparently just walked in the back door. At least make them break-in. That will give you precious seconds to respond.

Attacking a man with a drawn gun is always a grave risk but that’s one for each of us to decide in the moment. In this case, it worked out well since someone else was able to respond quickly with a gun of their own.

But the next move is where it could potentially go very bad for the resident. Deadly force is justified only when facing a deadly force threat. The moment the threat stops the justification for the use of deadly force stops. Once this invader flees the house and is climbing over the backyard fence, he is no longer a deadly threat. Or at least you are going to have a tough sell to convince a prosecutor otherwise.

Taking additional shots at him then looks a lot more like revenge than self-defense. Not to mention that you are liable for whatever damage those rounds might do. If the resident had hit or worse yet killed him at that point, manslaughter or even murder charges could result depending on the mood of the county prosecutor. As it is, reckless endangerment or like charges could be justified.

What usually happens is something like this. The fear one feels during the attack quickly turns to anger once the attacker is on the run and the victim no longer feels threatened but rather turns to something like, “I’m not letting you get away with this”. They feel completely justified in their actions and are subsequently shocked when they are arrested and charged with attempted murder or worse.

Know the self-defense laws where you live. Rehearse these things in your mind so that if that day should come you’ve already preprogrammed yourself to act decisively within the bounds of the law.