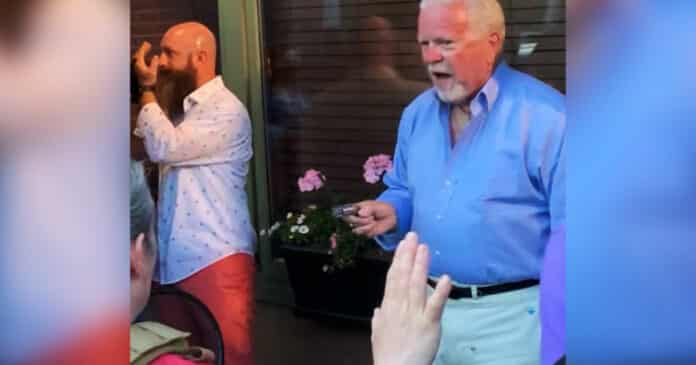 On the day of the Kentucky Derby, some restaurant patrons dining in an outdoor area caught the attention of protesters that were moving down the street. They began confronting the diners with shouts of various kinds and generally disrupting their meals. A restaurant employee reportedly told 911 dispatchers “that multiple armed protesters entered the restaurant property, which included outdoor dining space.”

I watched the video several times (as probably have most of you reading this) and could not see any protesters with guns but that doesn’t mean it didn’t happen as the employee reported. I did see one patron taunting protesters, another just standing there calmly holding his drink, and another who did pull his gun and pointed it at the protesters.

The number of protesters was tough to count but there didn’t appear to be more than a dozen or so. What was clear from the video was that there was a door only a few feet away from all of the diners that lead back into the restaurant. In my opinion, all three of the diners mentioned did exactly the wrong thing.

It goes without saying that taunting a mob of protesters is just stupid so no more needs to be said about him. The man standing there with his drink did remain calm which is good but there was no reason for him to stay there when an exit was so close. Mobs are to be avoided if at all possible so as soon as they engaged the diners it was time to move to safety; especially if one or more of them were armed.

That goes double for the diner that pulled his gun. The door to escape this scene was no more than five or six feet behind him and instead, he decides to stand his ground with what looks like an NAA mini-revolver. These guns are five-shot revolvers that are chambered in either 22 LR or 22 WMR. Even if he had the 22 Magnum version is he really expecting to stand down a dozen or more protesters with just 5 rounds? If one of the protesters had decided to engage him with their own gun he would have been seriously outgunned. Why take that risk? Just leave. Others in that area did so safely.

The only reason to display your gun is if you are facing an imminent threat of death or great bodily harm. Short of that your best bet is to escape the situation if you can. The fight you always win is the one you avoided.