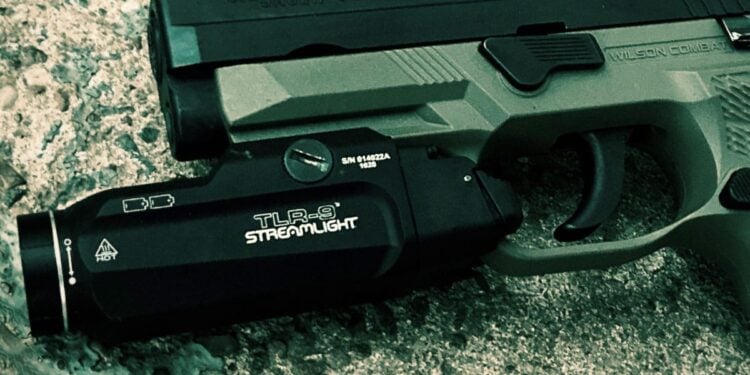 In the year that never was (2020), Streamlight introduced their new TLR-9 weapon-mounted light. It is, in essence, an evolutionary step from the TLR-7a. The battery capacity increased from one CR123 to two CR123’s, and consequently, light output doubled as well. The price point is pretty typical for Streamlight’s TLR series of lights, right around $120-$130, depending on where you shop. The TLR-9 boasts a 1,000-lumen output rating and 10,000 candela. Let’s see how it stacks up to the other 1,000+ lumen weapon-mounted lights available.

The TLR-9 abandoned the traditional approach to stuffing two batteries in a small package where they are usually placed side by side for weapon-mounted lights and went with a stacked battery format. This makes the light look weirdly long but has the benefit of making battery changes a bit easier to accomplish. Instead of removing the entire light from the gun to replace the batteries like on the TLR-1, the TLR-9’s bezel is removable, and the battery compartment is accessed through the front of the light. This makes battery changes with the light still mounted a breeze, as long as you are careful not to muzzle your hand while doing it.

An additional benefit to a removable bezel is engineered in a “lockout” feature as well. Turn the bezel about a quarter turn counter-clockwise, and there is a noticeable catch. That is the lockout, and it will prevent the light from turning on while in storage. Handy for lights that might ride around in a range bag or be mounted to long guns in a safe. With how easy it is to activate the buttons on the rear of the light, I think that is a worthwhile feature.

The real beauty of the TLR-9 (and the TLR-7) is the way the switching works. It is a departure from the rocker switches on the TLR-1, and now the switches are pressed forward. A quick tap on the switch will get you constant on. If the switch is pressed and held on, it will work like a momentary switch. They are very easy to activate while maintaining a good grip on the pistol. With the high switches, they almost work like a makeshift “gas pedal” on the front of the gun.

Low switches are included in the package with the light, but the high switches are what come mounted on the body of the light by default. I suppose it is nice to have options, but I do not find the low switches to be all the useful. I think most other people will probably find the same. If someone does want to mount the low switches, it is just a matter of using the included Allen wrench to remove one set of switches and install the other. A bit tedious, but not difficult.

It isn’t all sunshine and roses, though. As much as I think Streamlight did some things right with the TLR-9, there are some things I think they could do better. Because of the stacked battery arrangement, the TLR-9 is a really long pistol light. On a gun like a Glock 19, or Glock 45, the front of the light extends well beyond the muzzle. Even on a Glock 17, it still extends well beyond the muzzle. If the only concern is running the gun in an outside the waistband holster or on a home defense gun that maybe never sees a holster, it would probably be okay. On a holster carried concealed, it would really upset the balance of the holster and would add quite a bit of additional length to the holster in an inconvenient place.

Speaking of holsters that can accommodate the TLR-9, they are few and far between. Having a good holster is paramount to good concealment and the ability to carry a gun for extended periods of time. While searching for holsters that could accommodate the TLR-9, I found very few. The few that I did find were not what I would consider concealment holsters. I think this really hurts the viability of the TLR-9.

Lastly, the output, while it looks good on paper, isn’t the powerhouse it would make itself out to be in reality. Lumen ratings are based on total light output. A light can have a high lumen rating but have a relatively short range and not appear to punch its weight class because the beam is too wide. While the TLR-9 is not as bad as some other lights I have used, it definitely falls short of what I expect a 1,000-lumen light to be able to do. This is largely due to the small and shallow bezel that is used on the TLR-9 to maintain its form factor. I would call the TLR-9 okay for short-range work, inside about 25-35 yards. Much further than that, and I think the light loses out against the other 1,000-lumen lights on the market.

The TLR-9 has Streamlight’s usual level of quality. Good for a sub $200 light and acceptable for a semi-hard use light. I ran what ammo I could through handguns with the light mounted, but admittedly, I didn’t shoot the handguns it was mounted to a huge amount. Have you seen 9mm prices lately? To supplement the handgun shooting, I also mounted the TLR-9 to my 12-gauge pump gun. I figured if it could survive some time on a 12 gauge shotgun being slammed back and forth, that it should survive most pistols (fingers crossed). I have enough faith in Streamlight’s engineering to trust that it will.

So, what is the straight scoop? The TLR-9 falls a bit short. Sorry, Streamlight. The execution of the ergonomics of the light, and the switching, is the best part of the light. It works better than the rocker switches on other light offerings. It falls short on real-life output compared to the competition, though, even within the Streamlight brand. The lack of holster compatibility on top of that just really kills it. As good as the idea is, without the holster support, what is the point really? It is unfortunate. With good holster support, I would give this light much higher marks.

Store Owner Claims Himself as Victim After Deputies Fired at Him

Store Owner Claims Himself as Victim After Deputies Fired at Him