Should You Keep a Rifle Ready for Neighborhood Defense? 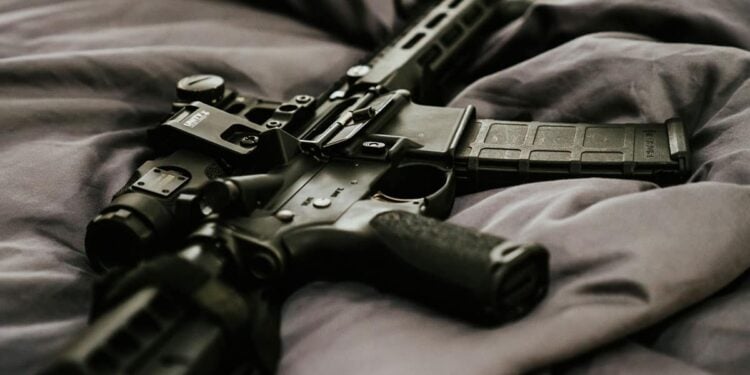 A recent incident in which a resident of an apartment complex used a bolt action rifle to neutralize an active shooter who began firing on his neighbors stands out as an unusual circumstance. Rifles are seldom used compared to pistols for self-defense and personal protection. When they are used, it is most often within the confines of the home.

Another well-known incident in which a rifle was brought to bear against an assailant attacking innocent people outside of the home was the Southerland Springs Church massacre. The heroic Stephan Williford emerged from his home, across the road from the church, and shot the killer. Such circumstances prove rare, but they happen nonetheless.

Many people have widely adopted the rifle as their preferred home defense weapon, especially over the last decade. The popularity and user-friendliness of the AR15 has ushered in this trend. Where the shotgun was once regarded as the only sensible choice for home defense beyond the handgun, the rifle has, indeed, taken an enormous part of this marketplace.

But, while the shotgun and handgun both play an obvious role in defending the home, do such incidents as those mentioned warrant the consideration of a rifle as not just a home defense gun but as a “neighborhood defense” gun? I propose that this is a valid consideration.

While inserting one’s self into violence transpiring between others is generally unwise, a clear circumstance such as an active killer on a rampage would, indeed, justify responding with force even if the threat is across the street or down the block rather than in your own home.

The pistol is the master of maneuverability, thus making its role in home defense undeniable. The shotgun is the king of close-range decisiveness, thus making it the best option for certain applications. However, the rifle is a weapon platform that can do a greater variety of tasks. Once we introduce the possibility of needing to shoot at greater distances, the rifle is king.

While the shotgun might reign supreme for the distances found in a home, to prepare for threats that may, indeed, come from well beyond the home, the rifle is the clear choice. The accuracy, range, and decisive power of the rifle vastly outclasses the pistol. I propose that the rifle employed for this task does not need to be an AR15, AK47, or other such guns. The modern sporting rifle is the most ubiquitous and versatile platform available, and it does a variety of things well.

Certainly, if facing a threat at a greater-than-usual distance, the AR15 would be a great weapon to have in hand. However, if we look at these sorts of incidents, the most important element is simply the ability to reach out in range accurately and hit with decisive power. Bolt rifles may indeed serve well in this role. While I would not want to defend the home with a bolt gun, placing an accurate shot at distance with a powerful rifle is a task the bolt gun is certainly up to.

The other obvious choice is the lever action rifle. A lever gun, chambered in the widely utilized 30-30 cartridge, packs plenty of punch for anti-personnel use and gives enough range for such an event. Even lever actions chamber in magnum pistol cartridges, such as 357 Magnum and 44 Magnum, provide far greater power from the rifle-length barrel and provide far greater accuracy than any handgun.

If an AR15 or AK47 variant rifle is not your thing, or if you live in restricted jurisdictions that trample your rights, a good lever action rifle might be just the ticket. Keeping one loaded and available in the home might give you the advantage needed if facing such a circumstance.

In rural areas the world over, farmers and ranchers are not strangers to the idea of keeping a rifle for perimeter defense, most typically against pests and predator animals. Of course, the perimeter defense rifle can be brought into action against the criminal threat as well. I admit that for most of my life, I considered the primary handgun being top priority within the home for defensive needs, with perhaps a shotgun backing it up. The rifle, for an urban dweller or suburbanite, did not seem as pressing a need.

Such incidents as these that have been witnessed raise the question is perimeter defense a legitimate issue in suburbia? The evidence seems clear, and such incidents will, no doubt, increase.

At this time in our nation, it appears that rifles should not remain only locked away in the safe, but perhaps belong loaded, at the ready, in a quick access gun safe so that they can be deployed quickly.

Whatever sort of rifle you choose, if setting it up for possible defensive use, consider putting a light on it. Also, consider a sling. Some will argue that a sling is a detriment when accessing the gun as they can snag on things, and there is some merit to this, but there are ways to mitigate this issue.

Finally, consider adding extra ammunition to the gun itself. An AR15 with a standard capacity magazine should provide plenty of ammunition, but even so, there are options for affixing an additional spare magazine to the gun. Consider having extra ammo in a spare magazine or a stock cuff ammo holder with a bolt gun. For a lever action rifle, utilize a stock cuff ammunition holder so that you can reload the tube if necessary.

To be useful the gun needs to be quick to access and deploy. It is advisable to keep a rifle in “cruiser ready” condition: the magazine or tube loaded, but the chamber empty. I highly recommend keeping the gun secured in one of the many options for small quick-access long gun safes. If something extraordinary happens across the street of your home or in your apartment complex, you can retrieve the rifle and run the action to chamber it and bring the gun into action to defend innocent human life.

The handgun remains the primary defensive firearm for the citizen as it is the most likely weapon to be used for such, and it is the gun that can be carried concealed. However, if you need to neutralize a threat at greater distance and do so with accuracy and decisive power, any rifle vastly outclasses a handgun. The world we now inhabit can be dangerous, and having a rifle at the ready in the home should be part of your preparation.

Man Shoots Through Back Door; Hits Mother-In-Law Pounding On It

Man Shoots Through Back Door; Hits Mother-In-Law Pounding On It