by Concealed Nation
in Articles, News
3 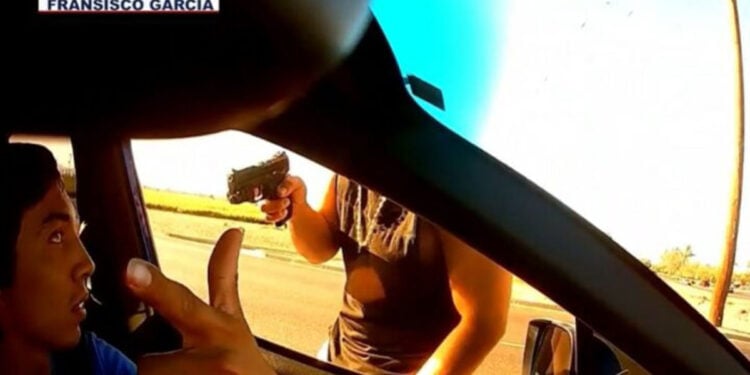 AVONDALE, ARIZONA — Fransisco Garcia was driving down the road when he says another driver began drifting into this lane. Garcia sped up and switched lanes, but that was far from the end of this ordeal.

At that moment, Garcia says the suspect got upset and followed him to the left turn lane. They reportedly both got out – Garcia wanting to get the suspect’s license plate number from the back of his car, and the suspect mad at Garcia thinking he cut him off.

Garcia told police the suspect began assaulting him until he got back into his car. That’s when the suspect showed up at the window and pointed a gun directly at him.

The dashcam video shows the scary encounter and reminds us all of how important it is to get as far away from aggressive drivers as possible.

Garcia seems to have had nowhere to go and was trapped inside his car with a gun pointed at him. Any time I pull up to a traffic light or stop sign, I leave enough room between my vehicle and the vehicle ahead of me so that if I need to make a move, I have space for navigating around that vehicle. If I have to hop a curb, so be it.

One of those reasons could be an angry driver who comes up to my window with a gun.

We’ll never know how a person will handle themselves until it happens, and always remember that not everyone you encounter will have the same character as yourself. There are people out there who have no problem pulling out a gun and assaulting you, or shooting you, simply because they’re mad about your actions while driving.

In AZ, pretty much any non-felony convicted individual can legally carry. I have to wonder if the perp in this case was legal. If he was, IDK. There are too many idiots out there.

A driver cannot access his concealed carry weapon because of the seat belt; a partial solution is to have a holster carried up high on the chest. I’ve experimented with this and found that it takes lots of practice with an airsoft replica to get a hit and not shoot your left shoulder.

If you appendix carry it is a lot easier to access your gun while buckled in.