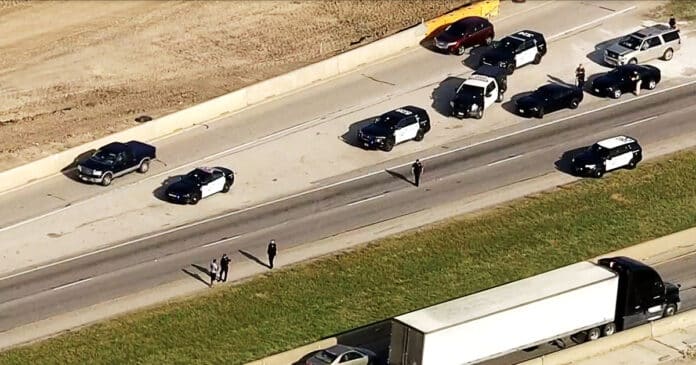 Last Friday, a man on a motorcycle was driving in between lanes of traffic, also known as lane splitting. This is illegal in most states, including Texas, which is where this incident took place.

The motorcyclist was cut off by another driver changing lanes that didn’t see him. Let the raging begin. After swerving out of the way, he sped up a few cars ahead and stopped traffic. He then drew a handgun and started walking back toward the car that he assumed cut him off. Little did he know, the man in the vehicle also had a gun of his own.

It seems as though the man in the vehicle told the other man to drop the weapon and that he had children in the car. This didn’t stop him, and as he continued to advance, the man in the car drew his own gun and shot the motorcyclist multiple times, ending the threat.

We’ve covered numerous road rage stories and dove deep into the topic of road rage. As a concealed carrier, you need to keep a level head and keep your ego in check, especially when driving. But what happens if that isn’t enough, or it simply comes out of nowhere like in this story. The driver seemed to have no clue he was cutting off the motorcycle. He was simply changing lanes, and then the next thing you know, he’s got a man walking toward him and (possibly) his family pointing a gun. I’m no lawyer, but it seems like this would clearly be a justified shooting. Being stuck in traffic, it seems the driver had no other options. Luckily, he did have one option.

It was a road raging 19 yr old that never should have had a gun.

Please follow up to let us know how the trial ends.

There wont be a trial. The SUV driver acted in self defense when the motorcycle rider forced him to stop and them pointed an gun at him and his family.

It’s the same old story. Legal gun owners don’t have time to wait for law enforcement to intervene when their family is threatened. It’s do or die and let the legal system ferret out the truth.