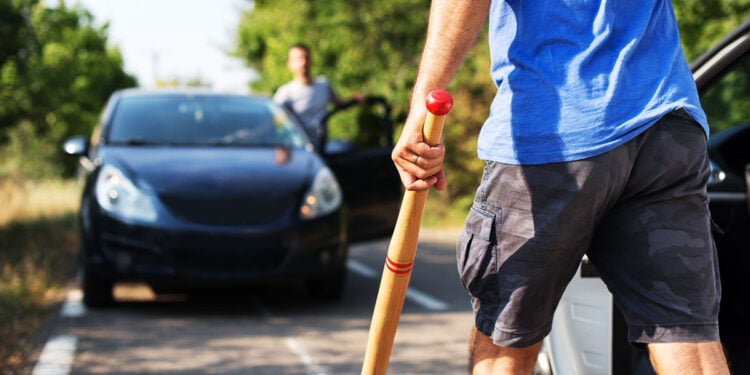 There is something about automobiles, traffic, and pent-up aggression among modern, soft, 21st Century males who spend their time in cubicles rather than in nature. Nothing gets such an urbanite into a fistfight quite as quickly as a perceived slight on the road. This trend amazes me. I have, on many occasions, witnessed yuppies dressed in business suits, who have probably never been in a fight in their lives, get into screaming matches due to a traffic incident. Where does this rage come from?

While understanding the phycological and sociological factors behind this syndrome are outside of my lane, I can offer you advice on how to best deal with a road rage incident, should you find yourself in the crosshairs of a yuppy in a beamer who is having a stressful day and decides to take it out on you.

While quite amusing on the surface, the fact is that road rage leads to a lot of violence every year, and sometimes these incidents even result in serious injury or death. While not particularly common, people can die in an unarmed fight; all it takes is the wrong fall, the wrong blow, a head hits a curb. Beyond that, road rage often brings people to the point of completely incoherent thought in which they will arm themselves with a blunt instrument, an edged weapon, or a firearm, to intimate or use on the opposing party.

When we speak about avoiding road rage, we can only work within relative terms; if you drive an automobile, you might end up with some fool road raging at you, no matter what you do. However, within your own ability, avoid driving in an aggressive manner. Think about the things that other drivers do that get you angry, and avoid doing those things to others. Don’t cut people off. Don’t tailgate people. Don’t speed up to overtake another vehicle, then slow down. While these things might seem common courtesy, they bear repeating in our self-centered society. Don’t instigate other drivers.

Very often, road rage incidents can only play out because both parties choose to participate. I have witnessed it myself and read about it many more times than that: a traffic incident occurs, then both parties, even if their vehicles are unharmed, decide to pull over to the side of the road, get out of their vehicles, and have a screaming match. The screaming match often devolves into a fistfight, or worse. The best way to avoid such a conflict is to simply not get involved. If some aggressive fool wishes for you to pull over, don’t. If they pull over, keep driving. If they then pursue you, call 911 and give a description of the vehicle and driver that are pursuing you. It is important that you alert authorities immediately if facing a driver that is acting aggressive and dangerous.

If unable to leave the incident, perhaps because your car has been wrecked or you are boxed in by traffic, I highly recommend that you don’t get out of the vehicle to confront the other driver if they are in a rage. Also, do not roll the window down. Keep the doors locked and the windows up. Be sure to get your seatbelt off so you can act. If your vehicle is unmovable and a person flies into a rage and approaches your vehicle, keep a close eye on his hands as the hands produce weapons. Call 911, immediately put the phone on speaker, and set it down on the dashboard to speak with the operator. Give them the description of the irate driver and tell them what he is doing. If you must, converse with the aggressor only through the rolled-up window and say loudly, that police are on their way.

If you are locked in your vehicle, and the aggressor is only screaming, then you have no right to use force. If the aggressor, however, produces a weapon, then the situation changes. A firearm, edged weapon, or blunt object is a clear threat when produced, if the driver is still acting in a threatening manner. A baseball bat, golf club, or tire iron can easily break a side windshield and kill you in a single strike. When in the seat of a vehicle, you are in a significant disadvantage due to your limited mobility and inability to escape.

If you can’t move your vehicle and the other driver exits their own and goes into a rage, it makes good sense to have your defensive handgun at the ready. I advise that you don’t brandish the gun. Trying to intimidate the other driver with it before you are justified in actually using it can land you in serious legal trouble. Rather, have it at the ready. If you unholster the gun, keep it below the door and windows and well out of sight. There is absolutely no justification in shooting the aggressor, no matter what he says. Even if he kicks out your headlights, there is no justification. However, if the aggressor produces a weapon, the circumstances change. Likewise, things change if the aggressor smashes out the side window to gain entry, even if he does it without a weapon. He now stands over you, in a superior position, and can beat you. His action of busting out the window speaks to the intent.

Like most forms of confrontation, road rage is best dealt with through avoidance. If you can simply drive away, by all means, do so. Never exit the vehicle and get into a heated argument with the other driver. If you can’t leave the scene, stay in the vehicle. Only use force as a last resort, and be sure that you are justified in doing so. Only if the aggressor directly threatens your life or that of another innocent party are you justified in using force.

That is way way too close to ever allow a knife armed assailant to get period. Back up or have it out and ready once you see the weapon in his hand but never let the assailant get closer than 20’ . We used to run rubber knife drills when in was in LE. It really drives home the point how vulnerable you are at short distances as it takes that long to just draw the gun out and that’s in easily accessed duty belt holster!
This illustrates another thing, why you should carry chambered. If you cant trust yourself get a revolver or a pistol with a heavy trigger like I carry. In this situation the assailant would win every time against a guy carrying unchambered so keep that in mind.