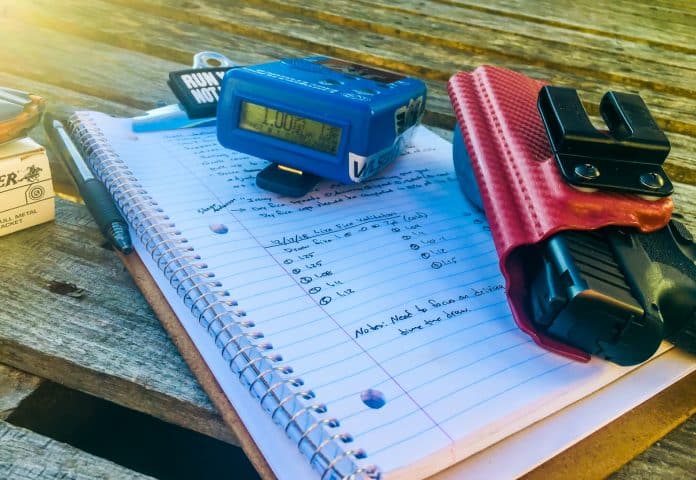 Scott Jedlinski, also called “Jedi,” is the brains behind the Modern Samurai Project. I mentioned him in the article, “Making the Switch: Doing AIWB Right,” I wrote a few weeks ago. My first exposure to Scott was from pistol-training.com, “because Scott is one of 19 people to have earned the coveted FAST coin for shooting a sub-5 second FAST in a class setting. I then started hearing about Scott in reference to slide mounted red dots on pistols and the “Roland Special.”

Then I heard about the Modern Samurai Project and, oh wait, that is the same dude that has FAST coin #15. When someone gets a reputation among knowledgeable and skilled people as a high-performance shooter, and then they start sharing their views on how to become a high-performance shooter, it might be a good idea to listen. Scott has a very detail oriented style of instruction, breaking down every nuance of a technique and fine-tuning the finest of details to get the best results possible. This comes through in his YouTube videos, and also in person. He is especially known for being good at getting people to go fast out of the holster, hitting that supposed magical benchmark of a sub-1-second draw to first shot on an A-zone or -0 from 7 or so yards.

Scott teaches classes like many other high-level instructors do, traveling around the country doing mostly two days classes focused on shooting RDS equipped pistols, but a few other formats mixed in as well. One area that sets Scott apart is that not only does he do the typical 1 or 2-day class, he also does 1-hour video consultations using Google Hangouts or Skype.

I don’t believe working over the internet with live video is a complete substitute for attending an in-person class; it is leveraging technology to provide a much more convenient and affordable training solution for the people that need it. The real question becomes, how effective can online-based instruction really be

Scott got wind of my AIWB article and reached out to me on Facebook offering a 1 hour “virtual” training session to see how far down the road he could progress me as a shooter. I was a bit skeptical, after all, I knew who he was, I kept up with him on social media, and I knew the basic gist of what he teaches. If I already knew all that, how could having Scott watch me on video really help? Well, let’s find out.

Schooled by the Jedi: A review of Scott “Jedi” Jedlinski’s Online Consultation

The session lasted about an hour, with a focus on efficiently and quickly drawing the gun from the holster. It seems like a pretty straight forward thing, but there was quite a bit of tweaking that Scott did to my draw stroke over video. He also talked about how to properly work dry fire with par times, and what we should be pushing for in dry fire, and then confirming with live fire.

This was actually something I had not given much thought to. He said if I wanted a 1-second or sub-1-second draw, then I should be doing dry fire reps in 0.90 or 0.80. By working a tenth or two under the live fire goal, I will be more likely to hit the live fire goal. Made sense, but I had not heard it explained quite the way he explained it.

I would estimate 70% of the session was spent working the draw strictly, making small adjustments here and there, rinsing and repeating as necessary to get the change in technique to stick, at least most of the time. Scott’s understanding of shooting technique matched with his attention to detail and an ability to communicate exactly what he wants someone to do and why is what makes all of this work. There is not a secret sauce or special technique he is teaching, but rather it is his personal ability to see what is there, know what needs to change, and then get the shooter to apply the change that makes him so good at this.

In the online consultation session, I was pulling off dry fire draws in 0.90 seconds in a matter of minutes, and in some cases with time to spare. I have never gone that fast in dry fire, and I had high hopes for what that might mean in live fire.

Twenty-four hours after the online session with Scott I was out on the range to validate the technique adjustments and to see how well it all translated to live fire performance. It is one thing to do something really well in dry fire, but another to apply that same level of execution in live fire. It was even mentioned in the session to anticipate live fire to be around 1/10thslower than what I can accomplish in dry fire.

I had hardly touched my gun since the training session and certainly had not done any follow up dry fire yet. I was hoping for the best but knew I might not realize the improvement I wanted without additional work. I stepped up to the line, not even switching magazines, and the first draw to 1 shot on a -0 (8” circle) at seven yards was 1.25 seconds. A bit disappointed, but I decided to give it another go, same time.

Taking stock of the mental checklist of the points Scott had made the day before I realized that I had forgotten a couple of key components. That happens when you don’t practice what you are taught. I set up for another rep, quickly went through the mental checklist, and a 1.08-second draw to first shot miraculously materialized in front of me. Forget that 1.25 seconds is already nearly 1/10tha second faster than my typical time to first shot, but relative to my own skill level 1.08 seconds is lighting the tires on fire. The rep also felt very controlled. I was not throwing the gun out in front of me and hoping for the best; I was clearly referencing the sights, then pressing the trigger. I continued to rep through the magazine, hovering around 1.10 seconds give or take a couple of hundredths until rep #12, everything fell into place, and I pulled off a 1.00-second draw, followed by a 1.02-second draw.

In 1 hour, using Google Hangouts, with no additional training or practice between the online session and going to the range for live fire, Scott successfully shaved 1/3rdof a second off my draw to first shot. That is an exceptional return on time invested.

I suspect there is some limitation to video chat based instruction, but I have no idea where that limitation is now. Quite honestly, I am dumbfounded that a few small changes to my technique yielded a nearly 25% improvement in draw speed and that a person clued in enough could see it in video and get me to make the needed correction in an hour.

Again, there is not some secret technique or combination of techniques, rather it is Scott’s ability to see what is there, know what needs to be changed, and get the shooter to change it that makes this viable. At the end of the day, it is $60 and an hour of your time, which is hardly an unreasonable fee or time investment. I think the vast majority of people will see significant improvement if they take the advice to heart and really try to apply it.  Now, I need to go do some more dry fire so that next week I can start dipping under 1 second.