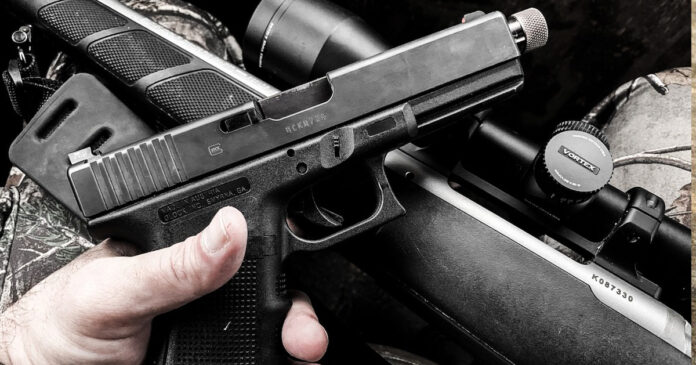 The threat of the human criminal element does not disappear simply because you are in the wilderness. Those of us that are hunters, hikers, or fishermen, feel relaxed and secure when enjoying the wild, away from the chaos of human activity. Nevertheless, dangerous people may materialize even while away from it all, be it deep in the woods or high in the mountains. The need for situational awareness and defensive tools remain consistent.

I spend time in the woods each year pursuing the incredible challenge of Whitetail deer hunting. While doing so I have a rifle in my hand. The fact that we go armed with a long gun while hunting certainly provides an advantage for self-protection, but this can also foster a false sense of security. Carrying a hunting rifle gives you an excellent tool for not only harvesting your prey, but certainly for dealing with a threat. However, there are limitations in the usefulness of this tool in defensive situations. Inter-personal violence remains a close distance affair among the civilian population. Even while in the woods, those that would seek to do harm will close the distance with you, most likely under a friendly guise. If taken by surprise, a hunting rifle slung over your back or leaning against a tree may not be immediately accessible.

It is for this reason that, even while hunting, I am a believer in the concealed handgun. My approach to hunting remains similar to my approach to daily life: I carry a concealed handgun on my person unless I am traveling in places that deny this right. When hunting in any state that acknowledges my carry permit, which most do, I wear a concealed handgun whether in the woods or in Starbucks on the corner of 5th and Main. Starbucks may be populated with more people, and by association more danger, but preparedness for self-defense should remain the default operating procedure regardless of where you are, even in the lonesome wilderness.

Carrying a concealed handgun can introduce some complications when dressing for the outdoors and many opt to open carry. I certainly have no objections to open carrying a handgun while hunting or hiking, as long as you are doing so legally, but I am willing to make the effort to conceal the handgun due to the benefits of such. A concealed handgun provides two tremendous advantages should you find yourself in a dangerous situation: The first, and obvious, advantage is that you have a firearm at your disposal. The second, and often overlooked, advantage of the concealed handgun is the fact that nobody knows you have it until it is called upon. The element of surprise is the self-defender’s greatest ally.

The need for a concealed weapon may seem unreasonable when in the woods or wilderness, but consider how you typically interact with others that you encounter in such environments. Perhaps you run into a fellow hunter or fellow hiker, do you have telepathic power that allows you to determine the true nature or intentions of this stranger? In my experience, when strangers encounter one another in the woods, they come close to each other, within conversational distances.

Most often you will merely be conversing with a fellow hunter, hiker, or fisherman, but how do you know who this person indeed is? Perhaps a stranger, or several strangers, wander into your campsite. If a few seemingly jovial fellows walk up to you while you sit by your fire and your rifle is propped against a tree, are you really going to run for the gun before you speak to the unknown party? Most likely not.

The concealed handgun gives you the option to interact naturally with people and in a non-threatening way while still having a defensive tool immediately available. If you do encounter a threat that does get close to you under the rouse of friendly happenstance, the concealed weapon gives you the advantage of surprise. It is for these reasons that I prefer and encourage the concealed defensive handgun while in the wilderness as well as on the city block.

For hunters and outdoorsmen that spend time in brown bear country, the need to carry a large magnum handgun for protection is completely understandable. Concealing a large magnum revolver is, obviously, harder to do compared to concealing a typical defensive pistol.
However, if you wear an open handgun while in the woods you must adjust your tactics when you interact with unknown people. If you meet strangers that approach you while you are open carrying, be cognizant of the fact that the weapon is visible and you do not have the benefit of surprise. An openly carried handgun can be a deterrent to certain criminal actors, but I advise that you not rely on this scenario. If you are within close proximity to a person that you don’t know, be conscious of the vulnerability of the visible gun to a disarm attempt and act accordingly.

If you are hunting in a location where you can’t carry a handgun at all, you will still be armed with your hunting gun. The consideration of self-defense should lead you to change your tactics to some degree when encountering strangers. Obviously, it may be socially awkward or threatening if you grab your rifle that is sitting close by and have it in hand to greet passers-by, but there are alternatives. Keeping the gun close at all times may become more of a priority if it is your only weapon. A slung rifle is typically normal and non-threatening when in the wilderness. If you sling your rifle over your support-hand shoulder, muzzle down, you can get the gun into action very quickly. You certainly want to maintain a reactionary distance from anyone you don’t know to give yourself time to deploy the rifle if needed.

In conclusion, the greatest weapon you should always carry with you, whether in the field or in the city, is a defensive mindset. Accept the fact that the vast majority of people you will encounter in either setting are well-meaning and harmless, but there is always the possibility of meeting a threat. When handling the approach of an unknown stranger do so in a friendly way, but stay alert and leave nothing to chance. Maintaining the ability to defend yourself while in the great outdoors should not make you paranoid, but should allow you to enjoy the serenity that much more. Having the skills and tools to take care of yourself and your loved ones provides peace of mind in any environment.