Do people shoot on the move in real fights? If so, is it effective? Should we train for it? We answer some of these questions in this article. 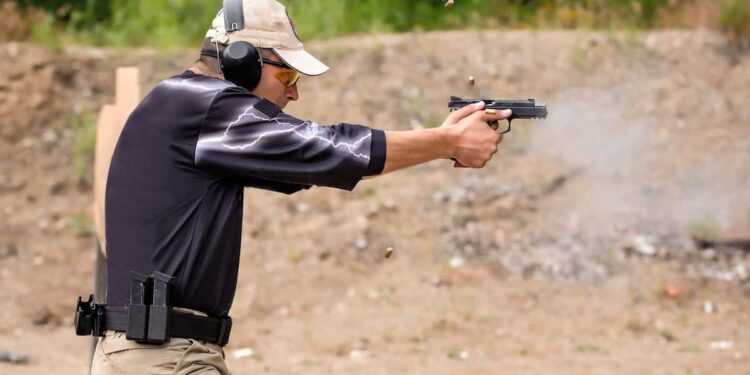 Shooting on the move is most often discussed in terms of being an advanced shooting skill. In my experience, defensive shooting classes rarely cover shooting on the move in a realistic way. The common approach to teaching this skill involves having the line of shooters walk slowly towards or away from the target while shooting. This is little more than a skill builder, perhaps, as walking casually towards a threat would be an absurd tactic under most realistic circumstances. Aggressive lateral movement while shooting is far more realistic. But this is harder to facilitate in training. So most instructors simply ignore developing this skill.

How important is shooting on the move? Is it ever actually done in the real world?

I have watched many hundreds of surveillance videos that capture defensive shootings over the years. You probably have as well. The necessity to shoot while moving is actually debatable. What is beyond a doubt, however, is that when people start shooting nobody stands still. As soon as people are threatened with bodily harm, they are most often in motion. The movement that we do see is not at all like that prescribed in most training courses where students casually walk toward a target while firing accurately. Therefore, the question to ask is, do people shoot on the move in real life at all? If so, what technique facilitates this?

In all of the videos I have watched, the majority have involved people moving rapidly. But few have involved shooting while moving. Those that do shoot while moving usually shoot wildly, generally with little effective accuracy, while running for cover or the exit. This tends to be the norm; single-hand shooting and making no hits while running frantically and in a panic. The majority of surveillance video shootouts feature poorly trained people, obviously, so bear that in mind. Still, you can conclude that people most often move, and if firing while moving they rarely land hits.

However, I have seen a couple of videos where a defender did effectively shoot while on the move. It is evident in the videos that these individuals were actually trained, and herein lies the obvious rub: shooting on the move is a technique that those who are adequately trained are more likely to do effectively. There are some leading thinkers among the self-defense community who have extensive military experience, and they argue that shooting while on the move has limited utility, and moving to cover, then shooting, has more merit. There is perhaps something to this, but we can conclude that in certain situations shooting while moving is a useful tactic despite how infrequently we may see it materialize.

Getting Off the X

The most obvious reason that we would want to move during a gunfight is, of course, to lessen our likelihood of getting shot. A very commonly taught technique is to “get off the X” while simultaneously drawing your gun to commence firing on a threat. The issue here, however, is that this technique is most often taught involving simply one or two side steps, then shooting from a stationary position. While this technique has been used occasionally, I am convinced that it is so heavily taught not for its benefits, but because it is easy to teach in a class.

Having an entire line of shooters step to one side or another is much easier to set up than having students actually shoot while in lateral motion. A simple side-step is also easier to accomplish for a lesser-trained student than is shooting while moving. The problem remains that in the real world people move, they don’t merely step to the side, and the best reason to be moving is so that you can get to a point of cover. Training to fire while staying in motion is more advantages for some circumstances than simply training to side-step and fire from a stationary position. Knowing both techniques is in order.

Getting to Cover VS Shooting While Moving

Scenarios in which the priority is to run as quickly as possible to get behind cover are very common, and if you are in a full-out run, shooting accurately is very difficult. Not getting shot often trumps making good hits, so the ability to move to cover, then shoot, has a great deal of merit under many circumstances. If the situation dictates moving so that you can stay alive, then this is certainly the priority. Bursting movement towards cover is a tactic worth training for, but the obvious trade-off is that the faster you move, the less able you will be to make accurate hits. Inevitably, being able to effectively shoot while moving requires slowing the movement down to some extent. The circumstance would certainly determine the tactic.

It is simply less common, but I have seen examples of people who are obviously better trained than usual actually employ effective fire while moving. Therefore, I suggest knowing how to do it and encourage you to practice it. Essentially, the key to being able to make hits while on the move involves lowering the center of your body’s gravity and moving directly forward with as little bounce in your gait as possible. Think about how you naturally walk if you are carrying a cup of hot coffee or other burning hot liquid that is all but overflowing. Do you step sideways when doing this? No, it causes to much bounce. Likewise, do you run quickly? Of course not. Rather, you tend to lower your center of gravity and smoothly walk forward, landing heal to ball on your feet.

If you apply this technique to shooting, your legs should work to stabilize your upper body so that your arms and gun can turn like a tank turret, allowing you to minimize the natural bounce of your gait, enabling accurate fire. Walking forward is the only technique that facilitates this stabilized motion. Stepping sideways causes too much bounce. Back peddling is usually a bad tactic as it almost guarantees that you will trip and fall.

When shooting on the move using this technique, you will find that you need to shoot single-handed when aiming far to your dominant side. Obviously, you can’t turn far enough towards your dominant side to keep both hands on the gun. You can, however, swing quite far to your support side and keep both hands on the gun. Take a look at some of the good shooters demoing this technique and give it a try. Getting comfortable with this can be greatly accomplished in dry fire.

I would submit that reality dictates bursting off the X. And quickly making it to cover is the more likely tactic to be employed in lethal force encounters. But knowing how to shoot effectively while moving is a more advanced technique. And it also may prove a huge advantage, no matter how unlikely.

Armed Robbery Suspect with CCW and Saggy Pants Turns Himself In

Armed Robbery Suspect with CCW and Saggy Pants Turns Himself In