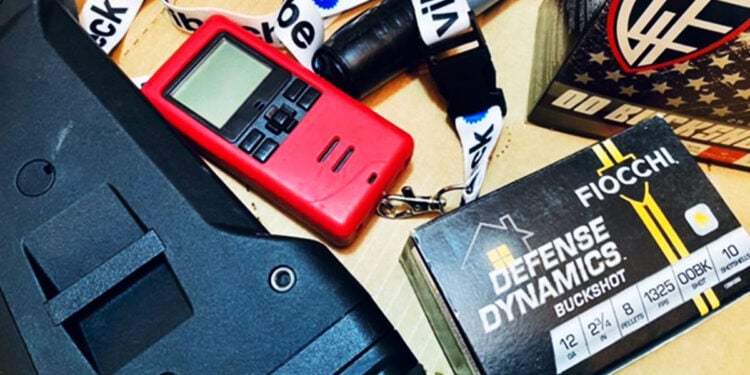 I am fortunate in that I have access to plenty of outdoor ranges locally. That isn’t everyone, though, and many people are stuck with indoor ranges. Indoor ranges come with a lot of limitations. The range owner needs to be able to protect their investment and keep their business running, so I understand why the limitations exist. They can really put a damper on driving hard into skill development, though. To help out the people who want to get better with that scattergun under the bed, here are a few basic drills that should work on most indoor ranges that allow shotguns.

There are a few key things that we are likely to have to do in using a shotgun for home defense, and not all of those things are just shooting. There is a fair bit of gun handling that will need to happen also. If the gun is stored in a cruiser safe or cruiser ready status, we will have to run the action to get the gun into action, work any safeties as appropriate, then we can worry about the actual shooting part.

It is important to practice these steps before the shooting happens just as much as it is to practice shooting. Since most indoor ranges have some sort of table across the lanes to keep people from walking forward of the firing line, this is a perfect place to practice this part of retrieving the shotgun.

For a starting point, load the shotgun to cruiser ready/safe with two or three rounds, and place it on the table, muzzle pointed downrange, of course. On whatever start signal you want to use, grab the shotgun, run the action as you mount the gun, and fire one round. Immediately run the action again if using a pump gun, follow through on the target as necessary, safety on, and then load one back into the magazine tube. This would be the full sequence of grabbing the gun and firing one round if it is stored for home defense.

The target distance doesn’t really matter, but if you want to mix it up a little bit, you can vary the distance of each repetition. Be sure to return the gun to cruiser ready/safe for each repetition.

While it is unlikely that a gunfight involving a shotgun will go past a handful of shots being fired, it is still prudent to be prepared for that eventuality. We almost all carry some sort of spare ammunition on the shotgun if it is to be used for home defense, so we might as well know how to get it into the gun. That is where we will focus our attention next.

Load the gun with two rounds. This can be two rounds with one in the chamber and one in the magazine tube and start from a low ready. Fire the two rounds, and then we will start working port loads/emergency loads. Now, this is the really important bit. We know there were two rounds in the gun; we just put them there. In an actual fight, though, we may not be able to keep up with how much we have actually shot the gun. The temptation during practice is to not cycle the gun again (assuming pump gun) and press the trigger again. We want to cheat, and automatically port load the gun after the second round. That isn’t training to the correct stimulus, though. The correct thing to do is, after firing the second round, to cycle the gun and press the trigger again, getting a click on what should be an empty chamber. This is the correct stimulus to initiate a reload on an empty gun and is the signal to port load.

Once we have port loaded, close the action and fire a third round. This time, since we just put one round in the gun, it is fair to say we would likely know there is only one round in the gun. Since we know, we get to port load after shooting the one round as part of our follow-through. We should always be ending our drills with a gun that is ready to shoot again if need be. Port load for a second time, close the action, and follow through on the target with a loaded gun, but do not press the trigger. Once satisfied on the follow-through, load one round in the magazine tube, and we are ready to rep the drill again.

There is a lot going on with this one, so here is a video showing the sequence.

Finally, we can wrap up our range trip with a little test. I find it helpful to have something that can give me a goal to work towards. Indoor ranges being as limited as they are, though, there aren’t any course of fire or complete drills that really fit. Instead, what we can do is take a single string of fire from a larger test, and use is at as our metric to give us an idea of where we are at. Now, that comes with limitations, but it might be the best we can do for an indoor range.

Probably the best home defense oriented shotgun skills test is the one designed by Chris Baker and Lucky Gunner. We probably wouldn’t be able to use the whole test at an indoor range, but the third string of fire in the test, I think is plenty useful for what we need.

The gun will start in cruiser ready, with at least three rounds in the magazine tube and sitting on the table. The target should be at five yards. Technically we are supposed to use buckshot for this one, but at this distance, birdshot will probably get you close enough. The target needs to be an IDPA target, USPSA target, or something with a scoring zone similar in size to the -1 on an IDPA target or C zone on a USPSA target.

On the start signal, retrieve the gun, run the action, and fire three rounds. Port load/emergency load one round and load one round into the magazine tube, and then fire two rounds for a total of five rounds fired. Pretty straightforward, but it is hitting all of the key skill areas. The ability to get the gun into action quickly, mount the gun properly, control recoil, and run the gun well enough to shoot the gun quickly, load the gun, and then more recoil control—all of the important stuff, and all at a realistic distance for home defense.

If you give these a go, hit us in the comments and let us know how you do.