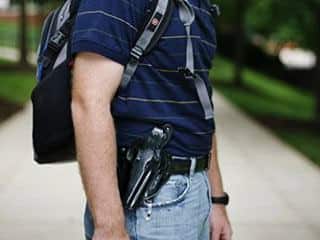 After events like What Tragedies Like The Delta State University Shooting Teach Us, it ought be argued that concealed carry by staff and students is a smart idea for college. While the detractors argue to the high heavens about whether or not some disgruntled student will do this or that — we’re seeing that in “gun free zones”, the criminals get to make the rules.

All it takes is for one armed gunman to make his way onto a “gun free campus” and it’s pretty much a waiting game until law enforcement can arrive. When seconds can last minutes and the recent Delta State University search lasted into half a day — the odds are against anyone on campus who’s lawfully unarmed when dealing with a serious, dedicated foe.

As we’ve seen in countless other shooting incidents, when a zone is arbitrarily designated “gun free”, all it means is that anyone caught in that area has to wait for police and first responders to arrive on the scene.

Once on the scene, first responders and police have to quickly sift through “friend or foe”. In a hectic situation, it’s extremely difficult to confirm origin of the shooting, who’s injured, who’s dead, and who’s at-risk. Having concealed carriers on the ground when law enforcement arrives means at least you have other eyes which have been on the situation since it developed. Even if it’s simply securing classrooms and shelters, it enables other students to know that their safety is a priority.

Another tragic part about the Delta State University fiasco was that while Mississippi is one of the few states which does not legally prohibit concealed carry on university and college campuses, administrators are still granted the privilege of restricting large swaths of the campus from concealed carriers. And as any college student or university employee would know — the time to transition between parts of the campus between classes is slim. For a concealed carrier interested in keeping his firearm holstered throughout the day would be unnecessarily dissuaded from doing so by the threat of crossing across a “gun free zone”.

Few, if any witnesses reported the actual gunman and law enforcement spent hours determining whether or not he was even still on campus. This means that security was/is so lax that it’s virtually guaranteed if someone goes somewhere with harm in mind and a cool head, he or she would have no problem walking right into an office and doing so.

The same answer is clear as in any shooting that occurs on a university or college campus — better armed, better trained, and better prepared people are needed. And in order to do that, we can either spend billions hiring on large armies of police to swarm at the first sign of harm or we can enable our own citizens to be prepared and able to defend themselves.

What Tragedies Like The Delta State University Shooting Teach Us