Should You Carry with a Round in the Chamber? [Part 2] 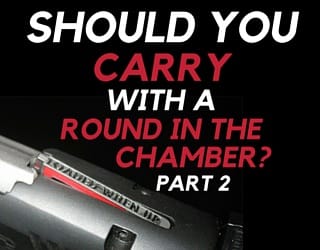 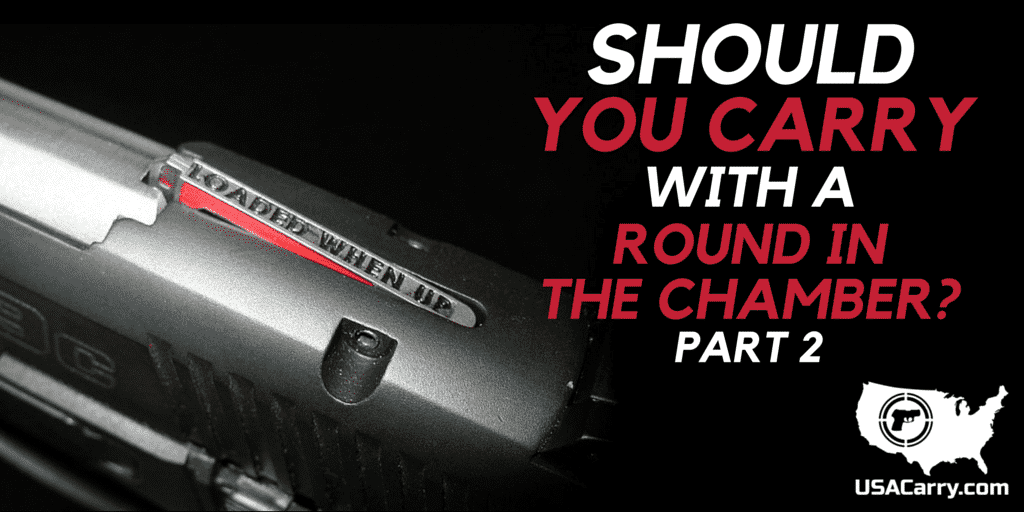 If you’ve ever asked yourself the question that’s in the title of this article, you’re going to want to give this a good solid read.

Quite a while ago, we posted a short and to-the-point article about carrying one in the chamber. We have decided to elaborate on this a little, as we came to the realization that many people who are starting out with firearms or completely new to them may not realize a few things when it comes to their concealed carry firearms.

How safe is it to carry with one in the chamber?

We’ll start with this: If you are carrying a modern firearm, it is extremely safe to carry your firearm with a round in the chamber. Features such as manual safeties, internal safeties, heavy triggers and FINGER DISCIPLINE will not allow your firearm to discharge unintentionally. A cocked and locked 1911 is no more dangerous with a round in the chamber than a revolver. We’ll stress this again: with a modern firearm, it will not discharge unless your trigger is pulled. However…

There are some exceptions to this, such as the type of holster you use (or if you don’t use a holster at all). Let’s say you have a flimsy holster that is not molded to your firearm and you go to re-holster. During re-holstering, part of the flimsy holster is folded over and gets into the trigger guard. This can, and has, depressed triggers and made the firearm go off. This is a negligent discharge. While very rare, it’s important that you are using a proper holster for your particular firearm. We stand by using a molded holster 100%, such as the Crossbreed holster pictured. Whether it’s a popular hybrid leather/kydex IWB holster or another type, having a holster that’s made to fit your exact firearm goes a long way. 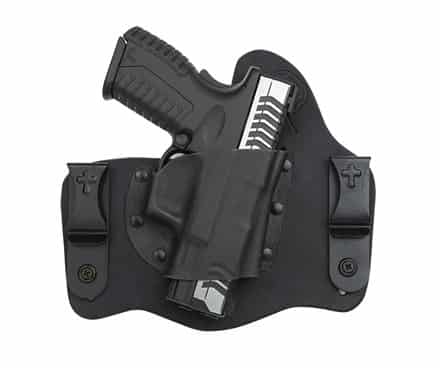 Let’s talk about Glocks for a second. Any Glock pistol has internal safeties that Glock calls their Safe Action System. These safeties are in place to do things such as, for example, not allowing the firing pin to move forward unless the trigger is pulled. It’s literally impossible for a Glock to discharge without pulling the trigger.

Revolvers. If every cylinder is loaded, a revolver always has ‘one in the chamber’. But, for some reason, people feel that it’s safer than a semi-auto. The hammer isn’t cocked so it can’t go off. Well, it’s the same with a semi-auto. While a Glock is in a ‘half-cocked’ state when the trigger is in the forward position, it will still never fire because of the information discussed  in the previous paragraph.

If you’re still uncertain about carrying with one in the chamber, take this next piece of information into consideration. Every time you un-holster your firearm, how many times has the trigger been depressed once removed? The answer should be never. If this is the case, then it’s safe to say that if you were carrying with one in the chamber, you wouldn’t have a discharge during the day. If you’ve carried for a year every single day with an empty chamber and never saw your trigger depressed at the end of the day, that’s a good sign.

If all of this doesn’t ease your concern, you may want to get more familiar with your firearm and practice as much as you can. We aren’t saying that you should stop carrying, but if you ever need your firearm one day, racking the slide can either:

Watch the video below for even more information on this topic. Post any questions or comments using the comments section below.