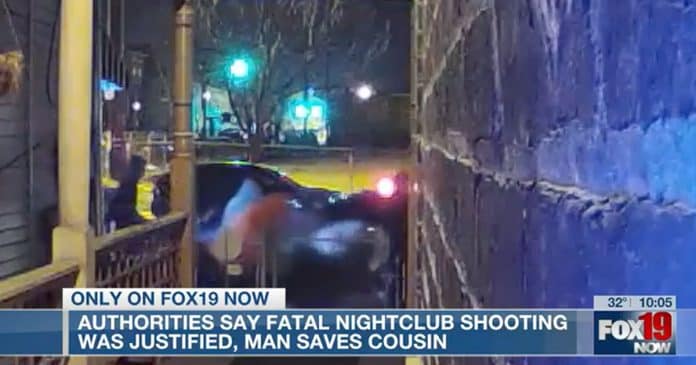 A Kentucky man and his cousin were in a bar when the unthinkable happened. The man bumped into someone he didn’t know and apparently the man he bumped into spilled his drink. We don’t know what, if anything, was said between the two or how much time passed but the man whose drink was spilled went out to his car to get his gun and confronted the man he bumped into when that man came outside the bar. He pointed the gun at him and threatened to kill him.

It was at this point that the first man’s cousin saw the threat, drew his gun, and shot the man with the gun in the head, killing him.

The prosecutor’s office, after a lengthy investigation, ruled the shooting justified as the man was protecting his cousin from a deadly threat.

The law does permit you to come to the aid of another facing a deadly force threat. The general rule is that you can use deadly force to protect another if the person being threatened would be justified to use deadly force in self-defense. Your reasonable perception of that justification can come into play as well but the real issue you can face is not knowing the events that led up to the point that you see the threat and decide to act. Use extreme caution if you decide to get involved in someone else’s fight. You could lose the physical fight or end up in a legal one you weren’t planning on.

This case looks pretty straightforward along those lines and fortunately, a man was able to save his cousin from harm.

Yes, perhaps millions of Americans are in local bars every weekend having a general good time without incident. But anytime you are somewhere where mind-altering substances are being used it would be wise to be extra vigilant of your surroundings. It would also be wise to leave before it gets too late and a good portion of the guests have been there long enough to get intoxicated. I mean it’s not like some people make poor decisions after they’ve been drinking for a while, right?

Apparently this guy thought more of a drink of liquor than a human’s life. Getting himself killed over a spilled drink that could have easily been replaced will really make his family proud of him I guess. I’ve saw people that thought pulling a gun and threatening to kill another over a small matter made them appear real tough and somebody you don’t dare mess with. They don’t realize that a truly scared person will kill you if they can to save their life or like in this case another’s. Guns are not to be played with or used for intimidation.

Glad to see the innocent survived such a ridiculous situation. Someone had anger issues.