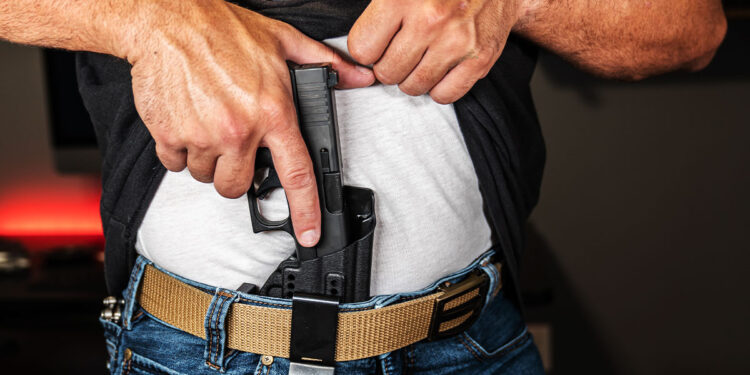 The firearms and shooting community proves interesting as every week there seems to be a new fad, both gear, and skill related. There also proves to be nothing new under the sun; everything that happens within the long-established world of shooting tends to be cyclical, and things repeat every couple of decades. The majority of practitioners do not know the history of the craft, so they presume that any given trend is cutting edge when it typically proves just a renewed interest in an old theme. Most shooters who carry in the appendix position think they are doing something new, yet undercover detectives were commonly carrying revolvers in this mode back in the 1970s, and the Caribbean pirates were carrying their musket pistols in the appendix position in the 1770s. Again, nothing new under the sun.

One skill that has garnered great focus consistently throughout the years has been a fast draw from the holster. However, there seems to be a renewed interest in draw speed, and I attribute this to the fact that now with so many carrying guns in good holsters in the appendix position, it has dawned on many shooters that they can draw a gun from concealment almost as quickly as from an open race holster. The appendix position also lends itself well to prepping the draw so that you can already have your support hand on the cover garment before initiating the draw, thus further speeding the draw from the holster.

The Surreptitious Draw: A Neglected Skill

Therefore, there proves a new focus on drawing the gun from this mode, but fast draw speed is hardly new at all. In fact, the fastest draw speed still belongs to the top tier of cowboy action shooters with single-action revolvers. More practical, though still old school at this point, were the early 20th Century pioneers of shooting techniques like Jelly Bryce and Bill Jordan, men who were known for super-human speed from the holster. Still, here we are in the 2020s, and many defensive pistol practitioners have become preoccupied with what is called “the sub-second draw.” This focus has ushered in an entire debate over whether the sub-second draw is practical or necessary. So, we will analyze that here:

What Constitutes a Sub-Second Draw?

This is what a real sub-second draw consists of: drawing the gun from under concealment and delivering an A-Zone/Down Zero hit to a USPSA or IDPA target at seven yards in under one second. Most consider a prepped start of having the support hand already on the hem of the garment permissible for this. Even with such a prepped start, there are far fewer people who can legitimately accomplish this sub-second draw, as opposed to the many who claim to do this when they draw to anything on paper within only a few yards. Starting from a prepped start or from a start with the hands hanging directly at the waistline near the gun are the techniques used by most who can pull off a sub-second draw.

Starting with the hands up in front of your face in a non-confrontational posture, which is arguably a much more realistic start position, makes accomplishing a sub-second draw much more difficult, and far fewer shooters can do this. As an example of the time difference, I can draw to a consistent A Zone hit at seven yards with a prepped start in an average of .90 to .95 of a second. From a hands-up start, I average about 1.00 to 1.10 seconds. So, I find about one-tenth of a second difference between the start position. Although the prepped start offers a tenth of a second advantage and allows for the magic “sub-second draw,” I would argue that practicing from a hands-up start position is more realistic and beneficial.

I think a good goal for a competent concealed carrier is a consistent one-and-a-half-second draw to an A zone hit at seven yards. I think that a sub-second draw is a testament to an investment into skills development, which is a cool goal for a shooting enthusiast, but I submit that it offers very little practical value over the much more obtainable 1.5-second draw. There are many been-there-done-that experts who believe this obsession over draw speed is a misplaced effort, and I agree with that.

However, let’s clarify this position; the cadre of people with real street experience who have been vocally critical of the obsession with draw speed do not suggest that having a slow draw is acceptable. Hardly. These individuals typically suggest the 1.5-second draw to a consistent hit as a good goal for concealed carriers. But, such individuals point out that the commitment to shaving off that .5 of a second is likely better spent on more practical skills development.

Many would submit that “you can never be too fast” or “you can never be too good.” Certainly, we want every advantage in a deadly encounter, yes? The issue, however, is that the real-world circumstances that dictate the timing of a successful defensive gun deployment rarely show any practical difference between a sub-second, or a second-and-a-half, draw stroke. For example, whether your draw speed is 1.5 seconds or .9 seconds, you can’t draw and effectively neutralize a threat that already has his muzzle on you at close range. When the moment of opportunity comes, there is likely not much real-world difference between this half a second. Correct timing and opportunity account for far more than this half-second in draw time, and this is the point that real-world gunfighters make. Rather than obsessing over shaving another 10th of a second off the draw speed, such effort is far more productive if spent in force on force training to learn how to make the appropriate timing decisions for action. There is a great deal of value in this assessment.

So, as a shooting enthusiast, this author enjoys focusing on the technical aspects of shooting and gun-handling, and I think a sub-second draw is a worthy goal within that context. However, I am inclined to agree with those who have real experience in multiple instances where they found decision-making and timing account for far more than a blazing-fast draw stroke.

In closing, I remind the reader that those who encourage others to stop obsessing over a sub-second draw do not suggest that you should not practice your draw stroke, but they rightly point out the other elements of real violence that far out-weight the difference between tenths of a second in just the draw speed. I suggest we heed the wisdom and experience of the people who have faced the kind of violence that we all wish to avoid.

My final assessment, for what it is worth: if you are a shooting enthusiast who wants to hone such a skill, I am all for it, and I do it myself. However, let’s keep things in perspective and realize that skills like the sub-second draw have more to do with pure technical skill than gunfighting, and there is nothing wrong with that in its own right, but we should not pursue such skills to the detriment of others that matter more in the real world.

Home Invader Says, “I’m not scared of you,” Then He Gets Shot!