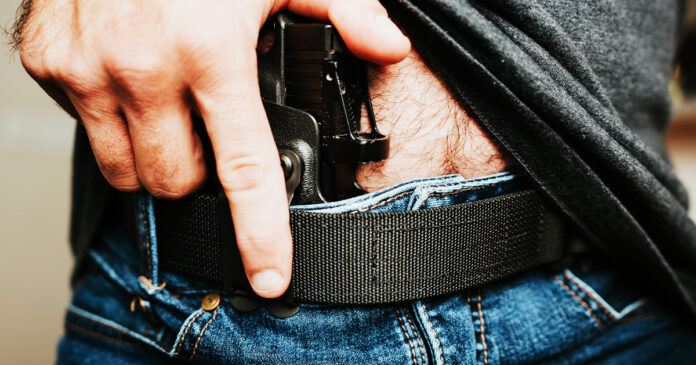 Among serious shooting enthusiasts, a fast draw from concealment gets a lot of attention. This is for good reason as deploying the gun safely, consistently, and quickly is a very valuable skill for self-defense. Another skill that does not get even a fraction of this acclaim, however, is a second draw stroke that is actually used in real-world violent incidents quite often: the surreptitious draw. Although few actually practice this technique, we witness it being used fairly routinely in deadly situations. Would it not be better to have a well-practiced covert draw stroke before you need to improvise on the fly?

Being able to draw your gun inconspicuously, with minimal body movement, is an important skill to have. I have watched a huge amount of surveillance video capture of violent robberies, assaults, and other such activity, and self-defenders often resort to getting their concealed gun in hand before engaging the threat. Even without training on the matter, self-defenders are often able to take advantage of the distractions in the environment that preoccupy the threat so that they can get their own gun in hand and short-cut the reaction time of getting their weapon on the threat.

The Reason for a Surreptitious Draw

The primary reason for conducting a surreptitious draw is to be able to get your defensive weapon in hand before the moment of engagement so that you reduce your lag time when the time comes to actually get rounds on the target. Such a scenario plays out commonly in real incidents. If in an environment where there is a single or multiple, violent actors that are threatening innocent people a concealed carrier may well find an opportunity to draw the gun and have it in hand so that when and if the time comes in which the danger must be engaged it can be done so without the added time of drawing the weapon.

Consider the circumstance of standing in the proverbial “stop and rob” gas station when it gets held up; perhaps the threat demonstrates a clear motivation to start hurting people and you know the only way to stop that outcome is to neutralize the criminal with gunfire. Maybe while the threat is distracted and paying attention to the clerk you have the ability to get your gun out of the holster and in hand in a clandestine fashion so that as soon as the opportunity presents itself you can engage. The circumstance may provide this if you have a shelf that you are behind or even a shelf that conceals the lower portion of your body so that the draw can be done without the adversary seeing it. Perhaps you are sitting at a table; can you draw the gun so that your movement is invisible to anyone who can only see above the table?

The key to a successful surreptitious draw is to minimize body movement as it pertains to drawing the gun, and the technique needed will depend on the position of the gun on your body. One of many reasons that I prefer appendix position carry is the fact that it facilitates a very effective surreptitious draw stroke, though there are different techniques that can be used even for strong side carry. Accessing the gun in a covert fashion is best done from a strong side carry position by blading the body so that the movement of the dominant arm is obscured. If facing a threat straight on it proves difficult to access a gun on the side of the body without excessive movement in the elbow. Therefore, a covert draw from strong side proves very difficult when seated. From the appendix position, a covert draw can be done quite effectively. Likewise, if turned with your back to the threat appendix carry facilitates an effective covert draw. Whatever your preferred carry mode, practice and experiment with the most effective techniques for getting the gun in-hand in a covert fashion.

To draw the gun discreetly, focus on minimizing movement in the elbows and shoulders, as these movements clearly alert anyone who is watching that you are reaching for a weapon. Again, the AIWB carry position offers an advantage here as you can minimize the movement in your shoulders and elbows. By simply lifting your forearm as a hinge at the elbow you can eliminate the movement of the upper arm and the shoulder and lift the gun out of the holster. From strong side, you will need to blade your support side towards the threat to conceal the movement of your dominant side arm; while doing so, bend the elbow outwards, rather than towards your back, so that the bent elbow is not visible behind you and visible to the threat.

Obviously, the circumstances of a violent encounter may demand a fast draw and presentation of the gun, but a circumstance that proves a prolonged affair in which a threat is in the environment and focusing on different things (not staring at you) may provide the opportunity to do a covert draw. If a criminal actor is behaving violently and you judge the situation to be one in which you must act with force to protect innocent life, then getting the gun into your hand to shortcut your draw may be a big advantage. Doing so at an opportune time is important as you would not want to move in a way that draws attention, and potential gunfire, from the threat.

If the threat has sight of you, even if not staring directly at you, you must avoid rapid movement. Being behind concealment of some sort is ideal, or even being in a position where your hands are concealed from the threat’s vision makes this draw feasible. Think back to the examples of sitting at a bar or table in which your hand movement can be hidden; if the upper arms, elbows, and shoulders are held still there will be no movement that draws attention. Once the gun is in-hand your presentation to the threat will be significantly faster than starting from empty hands that must obtain and deploy the concealed pistol.

A surreptitious draw is part of the overall skillset that the capable concealed carrier should have, and specifically practicing this ability makes good sense.