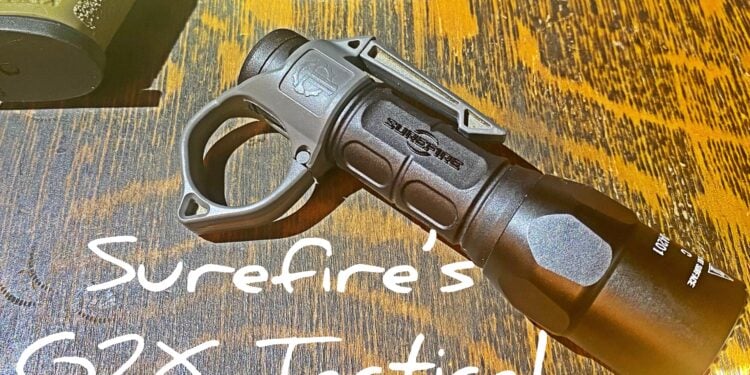 When many people think of Surefire, they think of dollar signs. It is the reputation that Surefire has had for a long time. They have worked hard to earn it, I am sure. Not every Surefire will require us to smash our piggy bank to get every last cent out, though. Surefire’s lowest cost tactical light is the G2X, a polymer-bodied, mediocre output, basic handheld light.

The G2 series of light has been around a while and comes in a few different flavors. There is a Pro version that uses two modes, a low and a high. The modes are accessed in that order. One press for low, two presses for high. Useful as a utility-type light. There is also a law enforcement version that is the opposite. Press once for high, two presses for low. Then there is the G2X Tactical. It is the simplest version. It only has one mode. High all the time. This is one we are looking at this time.

The G2X Tactical falls into the standard Surefire size profile, with a 1” light body and a 1.25” diameter bezel and about 5” long lens to tail cap. It isn’t exactly a small light as far as EDC lights go, but this is the size of light that I typically carry. I am used to it; others may find the size challenging as an EDC light.

The tail cap is Surefire’s standard clicky type. Push it partially for momentary and push it until it clicks for constant-on. There is a lock-out feature by rotating the tail cap counterclockwise about half a turn. A useful feature for a light that might get tossed into a bag, or ride around in the glove compartment of a vehicle, or get mounted onto a long gun. The switch has a good amount of travel before it clicks. This makes the use of momentary on quite easy.

The output is not anything to write home about in today’s world of 1,000+ lumen tactical lights. On paper, it only puts out 600 lumens and a little over 8,000 candela. It is powered by 2 CR-123 batteries, the long-standing standard for batteries in a tactical flashlight. This is both a blessing and a curse. Being able to drop a couple of new batteries in when needed is nice. CR-123’s are expensive, though. If anyone at Surefire is listening, a nice update for this light would be to make it a flex-fuel light and compatible with 18650 rechargeable batteries.

While the output looks meager on paper compared to the other lights available on the market within the same size category, it does actually throw a decent quality beam. Surefire generally does a good job at optimizing beam profiles for what they believe to be a good balance between spill and a decent hot spot. At least as long as you stay away from the Max Vision beams. The beam quality on the G2X is what I would consider acceptable but not optimal. I would say that the beam is good out to about 30-40 yards. It is possible to see things further away than that, of course, but we start losing some definition if the distance goes much further than that.

Run time on the two CR-123’s is advertised at 1.5 hours. Since there are not any modes or other power-saving features, it is what it is. While 1.5 hours doesn’t seem like much time, with intermittent use, the batteries last 2-4 weeks in my experience before needing to be changed. That means every month, or so, I am dropping another $5 worth of light into the G2X. Sure would like that rechargeable option.

How “Budget” is it Really?

The G2X Tactical can be purchased from Surefire for $79 but is available retail for around $60. It comes with 2 CR-123 batteries already but does not include a pocket clip if that is the desired mode of carry. Adding a decent clip will add about $20 to the price. I just threw my Thyrm Switchback on it. The G2X’s switch profile actually works quite well with the Switchback because it protrudes from the back of the light. It makes it easy to press while using the Switchback as designed—something I cannot say for some other lights. While the lack of pocket clip is annoying, it at least allows us to avoid Surefire’s attempt at providing one. They never seem to work that well.

The G2X Tactical isn’t going to set any records for the amount of output it delivers, but it strikes a good balance between cost, performance, and Surefire reliability and durability. Working on a budget, this would be one of the two lights I would have on my list to consider. More on the other one later.

Teen Being Held on $500K Bond After Shootout with Concealed Carrier

Teen Being Held on $500K Bond After Shootout with Concealed Carrier