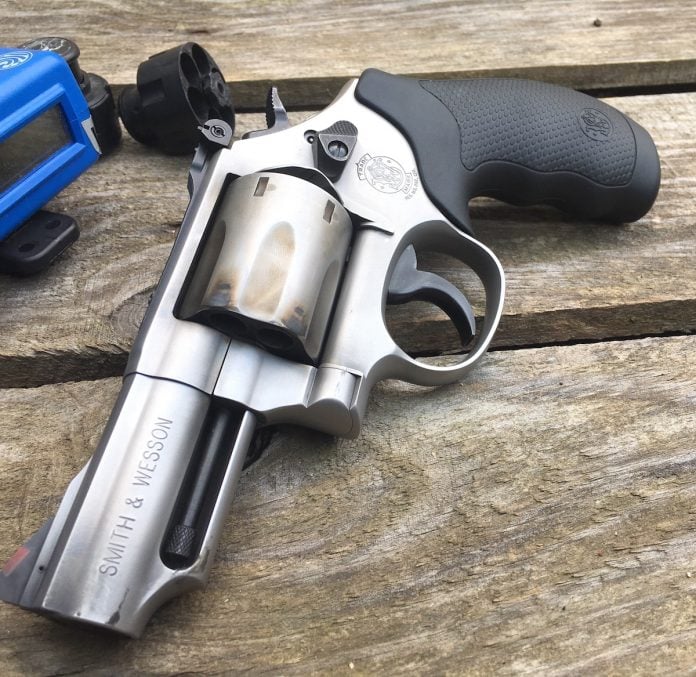 The revolver seems to have seen a bit of a resurgence over the past couple years in the concealed carry market. There are guns like the Kimber K6s. Colt is bringing back their revolver game. Ruger continues to pump out new versions of its LCR, S&W J-frame sales are apparently strong enough that they continue to make small variations to that product line.

One thing you will notice though is that these are all small frame revolvers. Great for carrying around, which I suspect has something to do with it, but not so great for shooting. When it comes to carrying a firearm for defensive use, there is a balance to be struck between easy to carry, but also easy to shoot, at least relatively.

In the world of the bottom feeder, that would be something like the Glock 19, small enough to carry, big enough to shoot like a service pistol. Used to, in the age of the round gun, that space was occupied by the 3” K-frame like the Model 66 or similarly sized revolvers, revolvers with small to medium frames, 3” barrels, and capable of shooting .357 Magnum. The Model 66, the stainless brother of Bill Jordan’s brainchild, the Model 19, made it all the way to 2005 before it went away from S&W’s catalog. Now, about a decade later, the 66 has been revived, and the Glock 19 of the revolver world is back. In this article, I’ll be reviewing the S&W 2.75” Model 66-8.

I am used to older S&W’s that have all smoothed up after years of use. One of the things that struck me about the 66-8 out of the box was how “hitchy” the gun felt if that is even a word. The trigger was not the smooth S&W trigger I was used to, and it maxed the trigger weight gauge I put on it, so it was somewhere well north of 12 pounds. 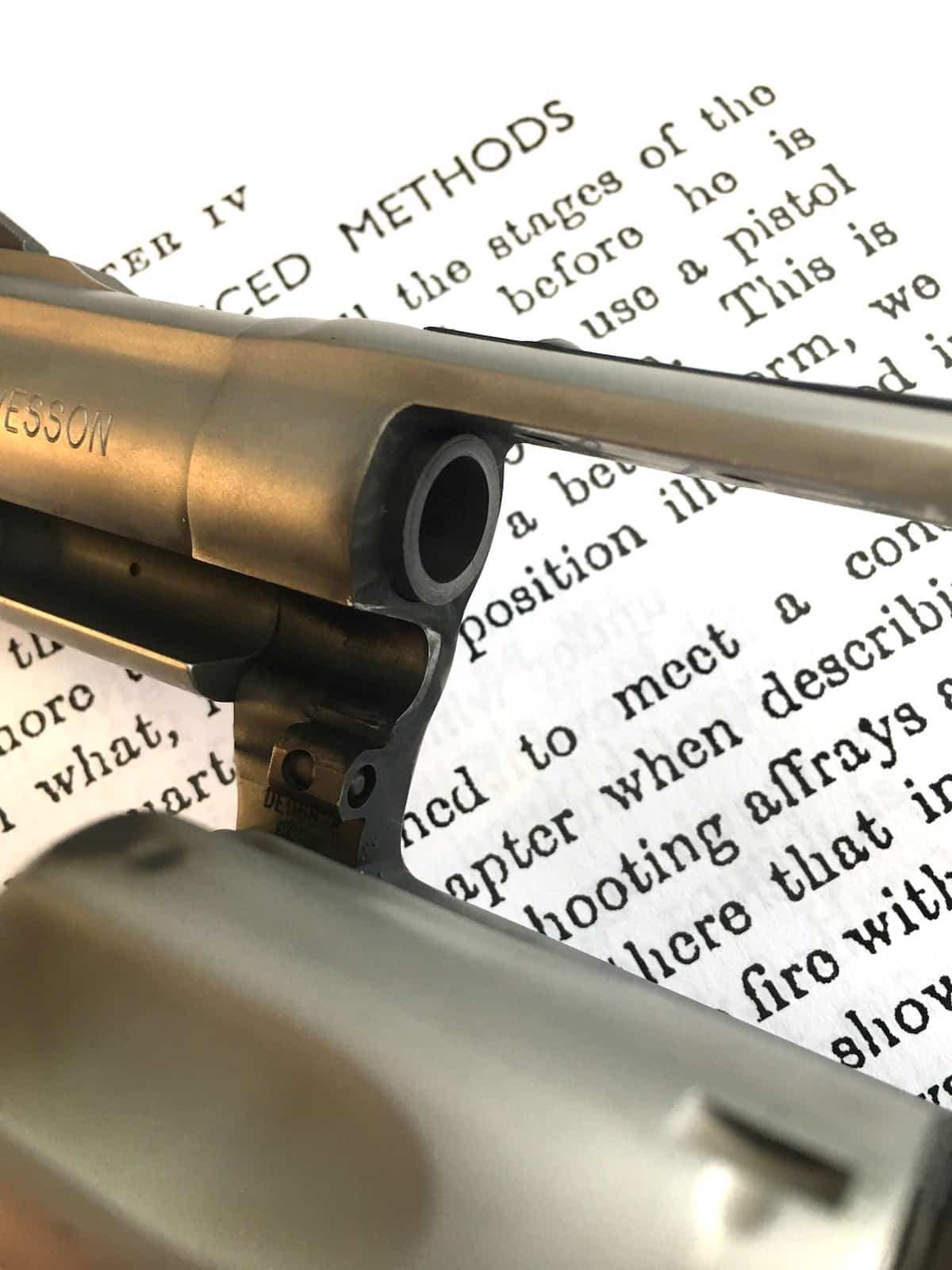 Of note on the 66-8 is that the barrel is now a two-piece design and there is a locking detent on the frame that engages the crane, as opposed to the older guns that engaged the end of the ejector rod to lock cylinder in place. If you are familiar with the previous iterations of the Model 66 or Model 19, you will know that the forcing cone had to have a flat machined into it at the 6 o’clock position for clearance purposes. The downside was that the forcing cone is subject to a great deal of heat from expanding gases and absorbs a significant amount of force when a round is fired. In the older guns, one of the issues reported was that with a steady diet of fast .357 Magnum loads, the forcing cone would crack where that flat was machined. There is a debate on how widespread of an issue this was, but there are at least some reports of it happening. In the current iteration, the 66-8, there is not a flat machined into the forcing cone, I assume as a fix for that real or perceived issue.

The finish on the gun is, to me at least, a very attractive matte stainless steel. I am not all that hip on a super bling gun with a polished stainless finish, so I appreciate the matte finish, but I get that is mostly just personal preference. The stocks are a nice rubber unit to help soak up some of the punishment from hotter .357 Magnum loads but is still kept small enough not to be a hindrance to concealment.

They got there with the comfort. They almost got there with ease of concealment. The issue with soft rubber stocks is that clothing will stick to them, or drape off of them oddly and make the gun print through the cover garment. Clothing still drapes a little odd over these, but if it is enough of an issue to warrant changing them out, it would be an easy modification. Most revolver guys probably do that anyway. I wanted to test the gun in factory condition, so I didn’t venture to change them.

The sights are the usual S&W adjustable sights. The front sight is pinned, so it is replaceable but I think does well enough as is for the most part. The rear sight uses a plain black blade, which is my preference. It would be nice if the notch were a bit wider from the factory, or perhaps the front sight a bit narrower. This is a gun that its only real use is personal defense, so having a sight set up geared towards quicker shooting I think would make sense.

The trigger stacked on the press, and was “hitchy” on the release, almost like it was getting caught somewhere in the release stroke. That being said, it did smooth up over time as I put more reps on the trigger. While not perfect out of the box, it is good enough. It definitely does not hold a candle to my 1980’s vintage 4” 66-1 in terms of smoothness of operation but doesn’t have nearly 40 years of use under its belt either.

Despite some of my disappointment when I first received the gun, in the holster and on the range, this gun performed as well as any other. I have been carrying the above mentioned 4” 66-1 almost exclusively for the past nine months. Carrying this 2.75” gun was a dream compared to the 4” gun. The weight difference, although not that significant, was enough to improve comfort and ease of carrying. The round butt stocks, although stickier than I would like from a concealment perspective, do lend themselves to being concealed. As mentioned earlier, this is not a pocket-sized revolver like its J-frame sibling, but rather a medium-sized belt gun. I carried the gun in a JM Custom Kydex IWB #3, and it faded away under an untucked polo and was comfortable enough to carry all day, for very long days. 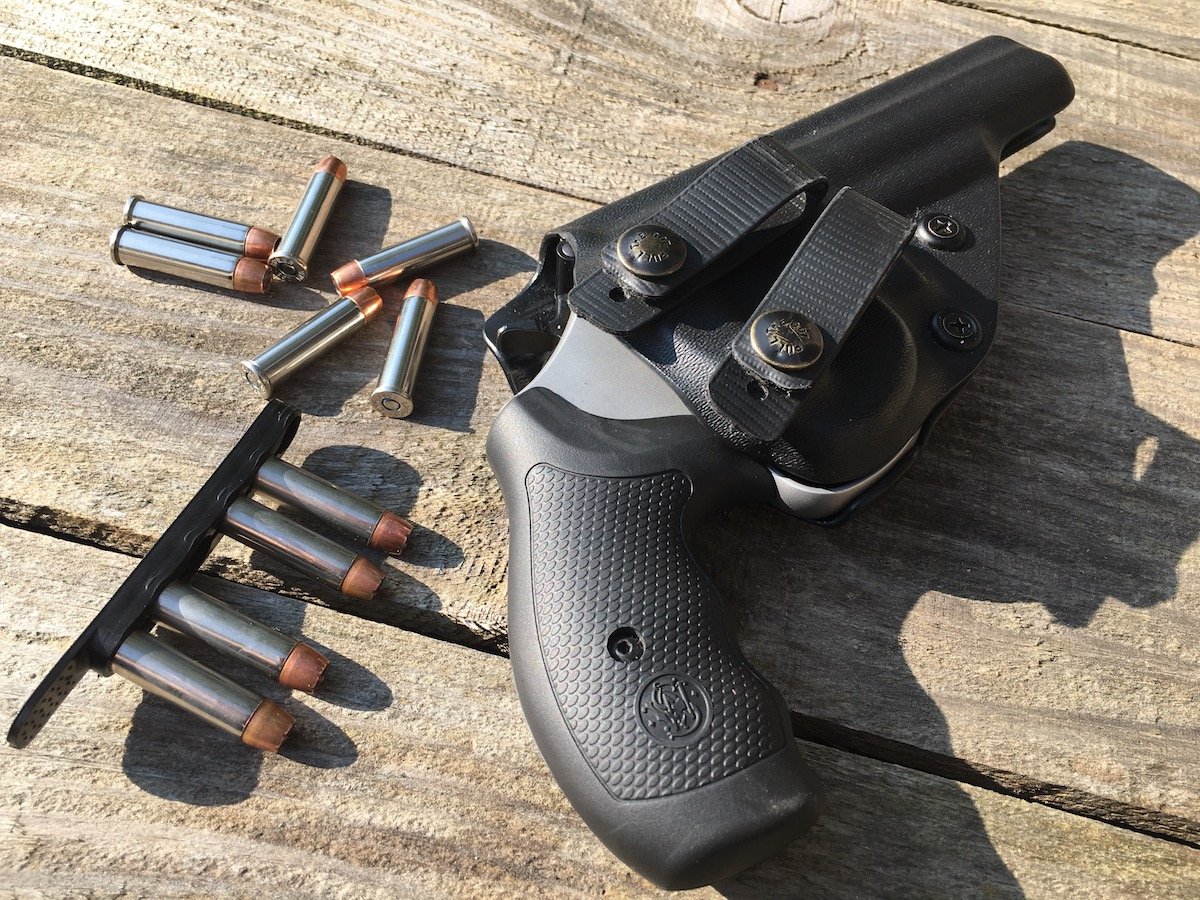 On the range, I was able to put just a hair over 500 rounds through the gun over the span of about a month. I tried to mix the type of ammunition up as much as I could to see if any function issues would rare their ugly head with specific ammunition types. I also did not clean the gun during the testing period. I did not experience any type of function issues. While I would not consider 500 rounds to be a significant amount of ammunition, it is enough that I feel comfortable saying this sample at least is reliable. It would take a much larger amount of ammo to speak to the long-term durability of the handgun.

The load that I ran through the gun the most was Winchester USA 130gr FMJ that is available at most big box stores that sell ammunition. This was probably the lowest powered of the rounds I put through the gun. I used two .357 loads in the gun, my carry load which is Speer’s 135gr .357 Magnum Gold Dot, a load optimized for shorter barrels, and Magtech 158gr .357 Magnum SJHP, just a generic, fairly traditional .357 load. Recoil was manageable with both of those loads, especially the lightly loaded Gold Dot. While the Magtech load slowed my shooting pace a bit, it was not any more so than what I experience with a 4” gun with shooting similar loads. Based on previous experience with small frame revolvers, I know for certain there is a line that gets crossed at some point with .357 Magnum ammunition and shooting performance degrades relative to the recoil created. I think the 2.75” 66-8 is just on the right side of that line. Any smaller and a significant amount of performance would likely be given up when shooting the more traditional .357 loads.

Initially, I was concerned about the accuracy of the 66-8. I had heard through other users that they did not experience the same level of accuracy from the new 66’s that they did from the older Smiths. There have also been reports of “clocking” issues with the two piece barrel design of the 66-8 where the front sight is not quite vertical, likely causing all sorts of accuracy issues. Visual inspection of this specific gun did not reveal any issues, and neither did shooting it. The way I prefer to test accuracy is practical accuracy. How well can I shoot the gun relative to my skill level? If I can shoot the gun at my known current skill level, I am good with it. The 2.75” 66-8 did not disappoint. With other revolvers I can shoot about 3”-4” at 25 yards from a standing, unsupported position. I was able to match that standard with the 66-8, even with the shorter sight radius and heavier trigger.

All things considered, if I were buying a new revolver to carry and wanted something not intended for pocket or ankle carry, the 2.75” 66-8 would probably be at the top of my list. My sample of one really hit the trifecta for carry guns. It is the correct size, not being too small or too large, practical accuracy to match my skill level, and reliable through a reasonable number of rounds with no special treatment. The small complaints I have regarding trigger weight, smoothness of the trigger stroke, and tightness when pushing the cylinder out of the frame I think would either resolve themselves with time as the gun broke in more, or can be easily addressed in other ways. And by no means are they a big enough of an issue to make the gun unsuitable for the task it was designed for. If S&W can stay on top of quality and there are not any reliability issues that manifest themselves as the round count grows, I suspect this version of the Model 66 will be around for quite some time.