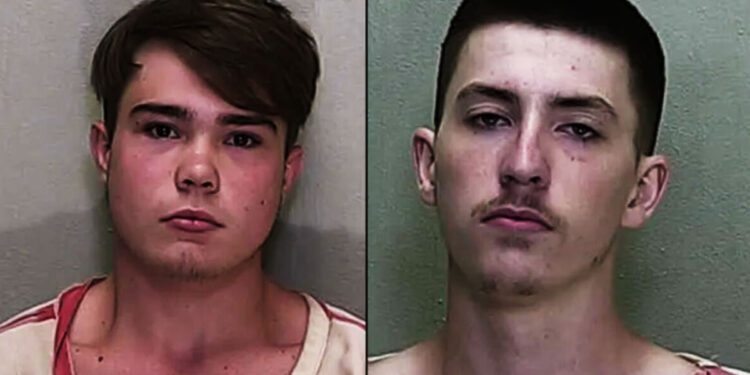 BELLEVIEW, FLORIDA — A teen is dead after police say he took turns with a friend shooting each other while wearing body armor.

Joshua Vining, 17, and Colton Whitler, 17, were both arrested by police. Vining is facing aggravated manslaughter, while Whitler faces charges of providing false information to the police.

The incident happened on April 3rd, and police were called to a home and found Christoper Leroy Broad Jr., who was taken to the hospital but later died.

“Through the investigation, it was determined that Vining and Broad were taking turns shooting at each other while wearing a vest which contained a form of body armor. Vining shot at Broad while he was wearing the vest, and he was struck,” the police department said.

Both are being charged as adults.

We were all stupid as kids, but there were limits. I can’t fathom how they thought this would be a good idea, but here we are.

Teaching kids about firearm safety, and respect for firearms, should be something that is done in every household.

It’s a terrible thing to have happened and hopefully a learning experience for at least a few people out there.

At the Range: Gun Safes

We got to start handing out Brains again to each and every child born.. it seems to be helpful

As a disabled USMC disabled veteran, after I divorced my wife after the amputation of my left leg, (SHE SAID SHE COULDN’T LIVE WITH A MAN WHO ISN’T WHOLE) I started to teach my 3 girls gun safety. I told them and my ex I didn’t care if they ever shot a firearm. but they would eventually be at a party when a gun would come out. It happened when the oldest was 16. they were told it was unloaded, Brandy told whom ever to put the gun on the table, she racked the slide and poof out came a round. firearm safety is essential in my world, all of my girls have shot most of the firearms I owned at the time. But that is the only time my EX-wife apologized for anything she was wrong about.