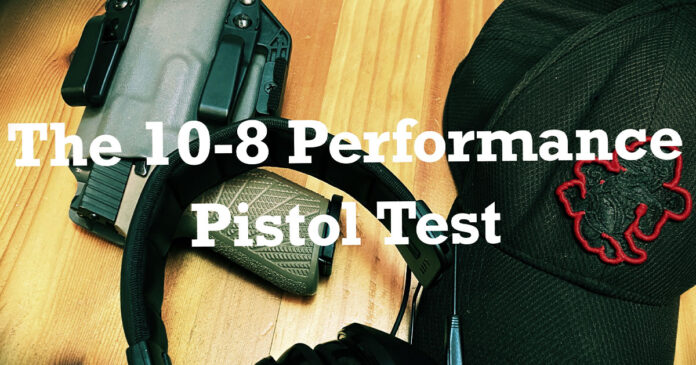 10-8 Performance has been around for quite a while. Longer than I have been old enough to own and carry a handgun. It is owned and operated by Hilton Yam, a now-retired FBI Special Agent. His tenure with the FBI included time on an FBI SWAT team, back when they were running Springfield 1911’s. When I first became familiar with 10-8 Performance and Hilton Yam, he was known primarily as an SME on 1911’s. His first classes were 1911 focused. Now that he is retired from his government job, he is teaching open enrollment firearms classes around the country.

Where did the test come from?

About 15 years ago, Hilton came out with the 10-8 Performance Pistol Test. I remember first hearing about the 10-8 Pistol Test on pistol-training.com and then seeing a video of Jason Falla (Redback One) shooting the test. The 10-8 pistol test is different than many of the more commonly known shooting tests these days because it has more complex gun handling challenges than we typically see on a course of fire.

All of the strings of fire are shot at 7 yards. The target that is supposed to be used is the old-style IDPA target that just had the square head box. Really though, any target with an 8” circle for the torso and a 6” square for the head zone will work. There are quite a few targets out there that will fit that bill.

The shooter gets to pick one of three par times, 8 seconds, 6.5 seconds, or 5 seconds. Whichever par time is chosen, that is the par time used on every string of fire. This actually makes it pretty useful as a “go/no go” standard for a large group of people because it can be shot by several people all at once, as long as they all use the same par time.

Scoring is also pretty simple. Hits in the 8” circle or the 6” square head box when called for, get 1 point. Everything else gets nothing. You either get 1 point, or you don’t. A score of 60 out of 65 is considered to be pretty good. If someone can get 60 points at a given par, it is time to move to the next par time, if one is available. 60+ points at the 5 second par time is getting pretty spicy.

The downside to this shooting test is that it is not short. In the modern age of everyone being ammo poor because it cost 50 cents per round or more, burning 65 rounds for a shooting test can almost cause tears. By my math, that is about $40 worth of ammo, for one course of fire. If you are one of the lucky ones, let us know how it feels when you shoot the course of fire.

Since it is a gun handling intensive course of fire, it also probably isn’t something that the average commercial range would allow. Definitely not the average indoor commercial range. I would also add that if someone is not familiar with how to do one-handed manipulations of a handgun, this may not be the shooting test for them. At least not until they have received quality instruction on how to do those things safely. It would probably also work to just skip those strings of fire, but that cuts out about 25% of the course.

That this course of fire covers skill areas not usually touched on by the strictly performance-driven tests I think adds value. I like it as an easily administered go/no go skills test. Essentially a qualification. That is both its strength and its weakness. The scoring system makes it easy to administer and quick to run, but it also limits the scoring to a set value. The scoring can only go so far, at least as configured. It is always possible to just keep dropping the PAR time.

If you have a range that will allow it, you should give this one a try. For ranges that won’t allow certain strings of fire, shoot the ones you can and adjust the scoring as necessary. Since 60 out of 65 possible points is considered a good score we can use that as a base for a percentage score. It translates to about 92%. If I have to cut some of the strings of fire, just calculate the percentage score based on the number of points possible with the strings of fire that are used. We are shooting for just better than 90%. Have fun, keep it safe.