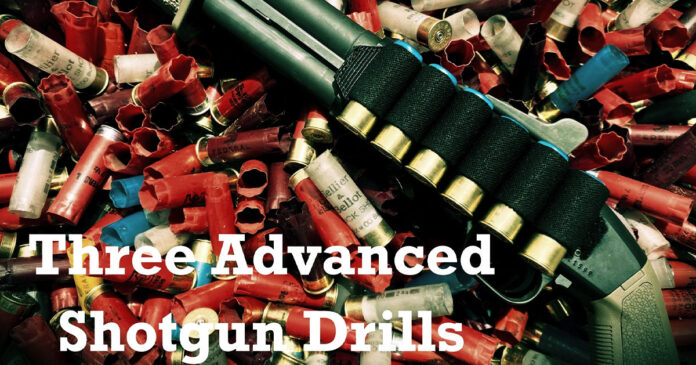 It can get pretty boring to hit the range with a shotgun and just always focus on the basics of running the gun. Presentations from ready, shoot, load, shoot. It gets mundane. Here are some drills to add a little spice to that gauge life.

I don’t really like to use the term “advanced” because all shooting is still the execution of the fundaments. These three drills, though, will require a range that allows a little more than normal.

I came up with this drill on my own. It was inspired by Earnest Langdon’s Close Speed Drill, except modified for the scatter gat. It is shot at 5 yards. You can use birdshot or buckshot and any target with an 8” circle. You will need three targets, spaced about half a yard apart, and a shotgun loaded with 4 rounds.

At the end of it all, each target should end up with 2 hits each. Any hits outside of the 8” circle and the run doesn’t count. It is an automatic DQ. I mean, come on, we are at 5 yards with a long gun.

What we are trying to accomplish here is to run the gun as fast as humanly possible. If we have some cracks in our technique, they will manifest as a slower time to complete the drill. Shooting it in under 10 seconds is decent. Shooting it in under seven is getting good. If you can get under five and stay clean, your shotgun game is on up there.

The Casino Drill was originally a pistol drill used by Tom Givens. The goal for the drill is to force the shooter to think about something other than shooting the gun but still execute a moderate level of shooting skill. It does that by forcing the shooter to track target orders and to keep up with the number of rounds fired at each target. If someone has trained to a sufficient level of automaticity, it is easy to keep up. If not, one task or the other will get the attention, resulting in either missed shots or not engaging targets as required.

Tom adapted this drill for the shotgun too. It requires four targets, placed about a yard apart. Targets are numbered 1,3,2,4 from left to right. Each target is engaged with the number of rounds that corresponds to its target number. Target 1 gets shot once. Target 2 gets shot twice, rinse and repeat.

To start, the gun is loaded with four rounds. I know you have done the math. 4 rounds ain’t gonna get it on this drill either. In this drill, loading is left entirely up to the shooter. We are allowed to load when, where, and how we see fit to accomplish the drill.

On the start signal, Target 1 is engaged with 1 round, Target 2 with two rounds, Target 3 with three rounds, Target 4 with four rounds. You will have to reload the gun somewhere in there, depending on what strategy you want to go with.

This one comes from Pat McNamara and is also a pistol drill.

In the handgun version, a steel target is used. With a shotgun, we have to consider some things before settling on a target. If our shotgun patterns well enough to keep all the pellets from a load of buckshot inside 8” or so at 20 yards, we can run steel. If our pattern performance is not good enough and we have to throw a couple of slugs in the gun to get good hits, we need to run cardboard or paper. Shooting slugs at steel at 20 yards is no bueno. Don’t be one of those guys.

We can adjust the scoring to be raw time plus a time penalty for poor hits if we roll with paper. IDPA scoring would be a good place to start, but it is really up to the shooter to decide based on what target they are using.

Grid of Fire, in my mind, is about being able to efficiently and safely move with the gun while under time pressure. Control that muzzle, keep it safe, but get your hustle on.

If you have a range that will allow multiple target engagements and movement on the range with a loaded gun, these are some solid drills. If you don’t, I guess you are stuck working up drills for the moment. I will work on something for you guys next. Stay dangerous.