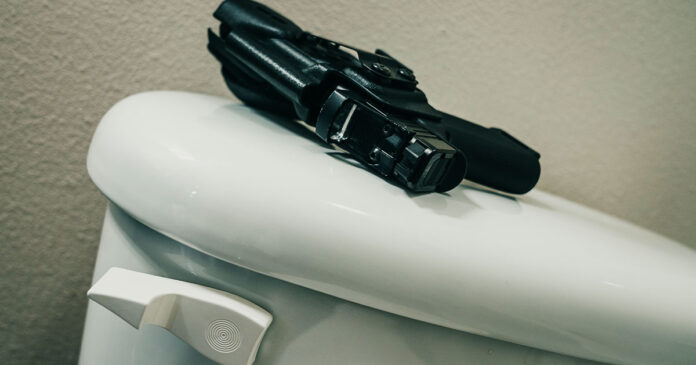 We’re all guilty of being forgetful at times. We get distracted by something or preoccupied with some task and inadvertently leave something behind. Usually, it’s nothing more than an inconvenience. Sometimes we have to spend money to replace what we just lost.

A Wisconsin Rapids woman earlier this month left something behind that will more than inconvenience her. She left a loaded, holstered handgun behind in the woman’s bathroom of the Washington School soccer field.

The gun was found and turned into the concession stand on the grounds which would seem to tell us that games were going on at the time. Police were called and they took possession of the gun.

The woman who has a concealed carry permit contacted police and identified herself as the gun’s owner. The district attorney is looking at the case to decide if charges will be filed.

Since the gun was more or less immediately recovered by police and didn’t fall into criminal hands and no one was hurt that carelessness could be overlooked by the district attorneys but the fact that is was found on a school soccer field shows that she was carrying the gun on school property which is prohibited under WI law.

I won’t attempt to predict the outcome here but felony charges are possible which would result in her losing not only her carry permit but also her 2A rights.

Perhaps we all should practice a plan (unloaded and safe) for a public restroom experience before we need to use one again. How do you manage your gun in public restrooms?

Dealing with Gyms, Bathrooms and Other CCW Hassles