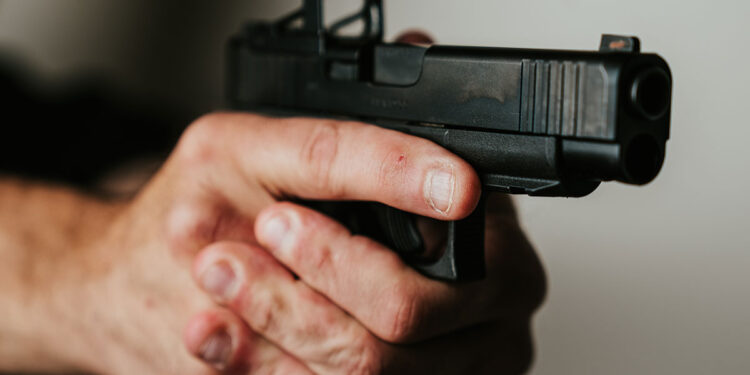 Hollywood is the single greatest perpetuator of firearms misunderstanding, and their favorite mistake to make is the portrayal of fingers on triggers. In the majority of movies, people run around with their finger on the trigger regardless of what is or is not happening. Does art imitate real life, or does life imitate art? Regarding firearms safety, I would suggest it is both.

Rule three of firearms safety states, essentially, “keep your finger off the trigger until ready to fire,” or some similar variation of. While it sounds simple, the application is challenging for anyone without a significant command of safe gun handling. When the human hand grabs something, all fingers naturally close. Keeping the index finger straight is actually counter-intuitive to nature. This is the first challenge. Beyond this, thanks to Hollywood, people are conditioned to seeing the finger on the trigger any time a gun is held. Therefore, rule three of firearms safety is the easiest for most people to violate, tends to be the most violated, and is the reason for many negligent discharges, sometimes with tragic results.

Rule three is exceedingly important because it can be the single failsafe element in chaotic situations. During a terrifying encounter, people may get flagged with gun muzzles that should not, even by a well-trained gun handler, but the ultimate safeguard should be trigger finger discipline. The catch is, again, rule three often gets violated by all but the most competent and experienced gun handlers. To maintain rule three, the human being needs to fight the natural tendency to contract all fingers together in sympathetic motion, as well as a natural tendency to seek the psychological comfort provided by having the finger on the bang switch. When muzzles are pointed in bad places and adrenaline is high, trigger finger discipline is essential.

The Mechanics of Rule Three

In all of my observations of students in shooting classes, as well as shooters at public ranges, rule three is, indeed, the most often violated rule. Novice shooters have a tendency to flag people with the muzzle, but muzzle awareness is easier taught and implemented than trigger finger discipline. The human being innately knows that the dangerous part of the gun is the muzzle, so learning to point it in a safe direction is more readily achieved. But the natural tendency for the finger to go inside of the trigger guard is hard to break.

Most operational negligent discharges can be attributed to a violation of rule three. Negligent discharges that occur during administrative handling can most often be attributed to poor gun handling skills, with the culprit afterward claiming, “I thought it was unloaded.” Operationally, however, when people are dealing with stressful and threatening situations, a finger on the trigger when it should not be is the usual cause of failure. Such negligence greatly increased in frequency with the wide adoption of striker-fired pistols in law enforcement and, in turn, the civilian population. The long and significantly heavier double-action trigger pull of revolvers did much to offset the frequency of such accidents.

The truth remains that having the finger inside of the trigger guard can cause an accident no matter how heavy or light the trigger is, but there is no denying that lighter triggers with shorter lengths of travel are more prone to being unintentionally touched off. The need for strict trigger discipline has increased as the majority of law enforcement, and concealed carriers alike have moved to striker-fired guns.

Many negligent discharges that have resulted in tragedy have transpired as a result of environmental factors that influence the gun handler, and this proves a significant concern. A trip and fall can easily lead to a discharge if the shooter’s finger is on, or even near, the trigger. A startle response to fear, such as being surprised by movement or the sudden appearance of an individual, results in a sympathetic contraction of the hands into fists, and if the finger is within the trigger guard, the possible outcome should be self-evident. Likewise, grabbing something or someone with the hand that is not on the gun fosters a natural sympathetic response in the other hand, which can result in a discharge if the finger is within the trigger guard. For these reasons, the finger must be kept outside of the trigger guard until the decision to fire is made.

One of the best ways to explain to new shooters the proper way to hold a gun is to describe it as, “when you pick up a gun, make a gun.” The extension of the index finger out straight, as we do when we make a fake gun without hands, is the behavior we need to build. The finger must be kept straight along the slide when a gun is picked up and handled. Concerning where, exactly, to place the finger, there are many schools of thought as far as the optimum place for the index finger to ride. Some suggest putting the finger so high that you touch the ejection port with the tip of the finger. Some suggest keeping the finger along the frame of the gun, though I would argue that is still too close to the trigger guard.