A Modest Proposal: A Truck Gun Might Be Unrealistic 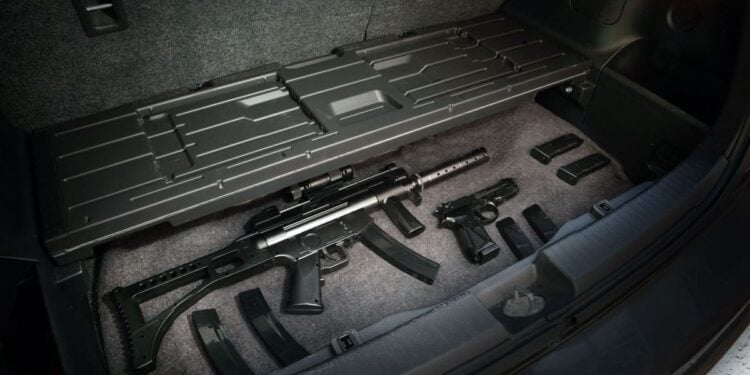 There are a number of concepts when it comes to personal defense that make sense on paper but falter in the real world, and the “truck gun” is one of them.

Don’t get me wrong. There are some merits, which I’ll get to.

The idea here is that you want to come up with a plan for personal defense that’s practical and works in the real world. There are all sorts of contingencies that a person can plan for, but your best bet is to plan for contingencies that are most likely to actually happen, and truck guns/car guns/trunk guns…depends on circumstances that aren’t necessarily likely to unfold.

The Truck Gun: Patrol Rifle Or Shotgun For The Armed Civilian

What most people mean when they talk about a “truck gun” or “car gun” or “trunk gun” is a long gun that they store in their vehicle, often as a supplement to a concealed carry pistol. The idea is that you’ll use your pistol to “fight your way to a rifle” or a shotgun.

The gun industry has certainly encouraged us to think so and it’s a big selling point for AR pistols, SBRs, and compact shotguns. And a whole lot of people have bought them for this use.

You know what they say about fools and their money.

In a lot of regards, that’s solid thinking, and that’s exactly why a lot of schools will teach you that idea, and also why a heck of a lot of police have a patrol carbine in the cruiser or a shotgun in the trunk. Heck, they’ve been doing that for decades.

So there’s some validity to the idea…right?

Here’s where we run into the conflict of theory and practice.

In principle, on paper, yes, it’s a valid idea and there ARE some exceptions that I’ll get into momentarily.

The reason a truck gun isn’t the most realistic is down to proximity, namely that of the threat and of your vehicle. There just aren’t that many situations for armed civilians where you’re going to have the time to get to the latter before the former gets to you.

Think about it this way: where are you most likely to encounter the kind of threat that requires defensive use of a gun?

In your home, at work or otherwise at a place of business, or in a parking lot as those are the most common locations where defensive use of a gun by civilians take place. In your home or on your way to your car in a parking lot, you’re barely going to have time to get your carry pistol out and on target.

As far as work or a place of business, it’s still incredibly questionable, but here we can start granting a bit of feasibility in some instances.

If you’re in a bank or a convenience store, and someone tries to stick the joint up, you won’t have the time; again, you’ll have time to get your carry gun out and hopefully put shots on target. As we all saw from the White Settlement, Texas church shooting…the same applies in places of worship.

There ARE, to be fair, instances where an active shooter or even a more ordinary threat like an armed robber has been dealt with by someone who went and retrieved a gun from a car or elsewhere.

For instance, the shooter in the Pearl High School shooting of 1997 was detained by a vice principal who retrieved a handgun from his car. In 1966, Charles Whitman – the UT Austin shooter – was pinned down by police and civilians who started returning fire; a few were even taken to their homes by the Austin PD to get them. The suppressive fire allowed two Austin PD detectives to ascend the clock tower and ambush Whitman.

There are others, of course, but the point is that while it can and has been done, such instances are few and far between.

I’m not saying don’t keep a truck gun or AR pistol in a bug out bag if you feel like you need to or even if you just want to. Whatever makes you feel better. But proficiency with a concealed carry gun is vastly more likely to actually be usable in the moment.

6 Reasons You Should Be Carrying a Flashlight

6 Reasons You Should Be Carrying a Flashlight